Everybody was shocked by the news that on April 19 in Utah a three year old girl killed her two year old brother with a shotgun. Poor boy, poorer girl and still poorer parents, what a tragedy, also for the wider family, the ward, the community, the church, in fact for everyone. This is exactly what should never happen.

Such an accident always depends on a string of improbable circumstances: the fact that the gun was within reach of toddlers, that it held still one bullet, that mother or father were just out of sight at that very moment, the improbable aim at the little brother, her finding the trigger at all, etc. Sure, each of the chains in this string can be broken if proper care is taken, but my point here is stating the obvious: there should have been no gun in the house, not in this house, nor in any home. A house with a gun is not a home. 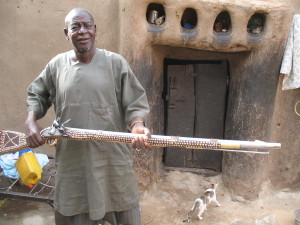 My Dogon ‘older brother’ Dogolu with his new rifle

This, I know very well, is a very European reaction, swimming against the American current, but it is deeply felt and very much part of my Euro-Mormon DNA. Guns and family do not mix, just as guns and gospel do not mix. For us from across the Atlantic, the USA has become a gun crazy country, totally in love with murderous hardware. Of course, we here in the ‘East’ can relate to the fascination of guns, these extended masculinities, and yes, we would be very bored sitting through a Western movie without any Smith & Wesson in action. Some Sundays ago our young Elders Quorum President avowed in his priesthood lesson that he was member of a shooting club, exuding some of that fascination to his audience, especially the youngsters. But then, the reaction set in that this was playing with fire (also addictive!) and that we were fortunate to live in a country where you could not just buy a gun in a shop. For me as a distancing anthropologist this meant that we in Europe had the good fortune that the monopolization on violence by the government was effected before democratization set in; in the USA this was the reverse, and this is one major drawback on the wonderful freedoms you-guys-across-the-ocean have accomplished. A house with a gun is not a home.

This Utah tragedy again cries out: ‘Enough is enough!’ Forget that stupid NRA mantra ‘guns don’t kill people, people kill people’, because it is patently untrue – and completely subservient to a major industry. Two years ago in Beijing a young man got berserk and attacked bystanders in a mall; he had a knife and managed to struck out to 23 people before he was arrested. All 23 survived. Compare this with the rampant school killings, and the message is clear, the correct mantra runs: ‘Guns make people kill’. Here in Europe we also feel the attraction of arms; On April 9 2011 a young man in a mall in a quiet suburb went on a shooting spree killing six, wounding 17, before taking himself out, with his – yes! – Smith & Wesson. How quiet the area was shows from the fact that half of his victims were using a rollator or an electric elderly car. He was member of a shooting club and had the right to have some arms at his house. The public reaction was typical: we should have even more restricted gun laws, monitor better those in shooting clubs, so new laws are on the way. Guns make people kill. A house with a gun is not a home. 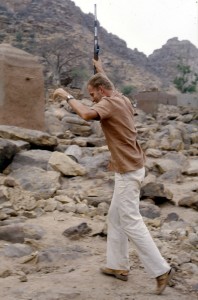 The author (younger!) dancing with a Dogon gun

Of course there is the burglar issue, also in the Netherlands. On March 30 of this year two burglars tried to rob a jewelry store in Tilburg on gunpoint, and the wife of the couple owning the store shot down the two burglars. Indeed, now the public voice was different: the two burglars had it coming; the police also released the owners quite rapidly. But not all of us are jewelers, and the number of death by accidents in the USA far outstrips successful defenses-at-gunpoint. Actually the lady seems to have shot in panic through a door, accidentally hitting one burglar, only taking aim with her second shot. Guns make people kill and also a jewelry shop with a gun is not a home.

This has everything to do with the gospel, which is about – if anything – life and death, this earthly one and the eternal ones. We profess to be the Saints of the Lord, and we should lead the way to the insight that guns and gospel do not mix. When did I last hear about this problem in General Conference? I do not seem to recall. Of all sins, it is killing people that stands out as the real one and our leaders seem to be remarkably silent on this issue. The present Pope Francis and the Dalai Lama try to lead the way to peace and disarmament, and of course few people share their charisma and global audience, but a voice should be heard, ours as well. Even mine. So this is a call for all Latter-day Saints to open and join the debate: ‘Enough is enough’. Somehow we have to square our morbid fascination with the extended masculinity of guns with the really important issues in life: compassion, family, safety, trust and love. So, please Brethren, help us to move forward here, and lead the way. We all are on the same side, that of the Lord, so help us to be also on the side of the Prince of Peace. A house with a gun is not a home. 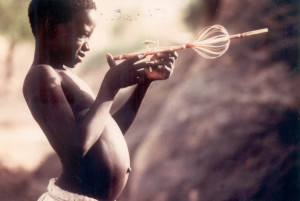 A Dogon boy with a millet gun

Just as a postscript and as an explanation to the pictures: I know I am standing on a lot of toes here, and I do so with full European intent. I happen to feel the fascination of guns myself, and the pictures show as much, they are from the Dogon area in Mali, my own fieldwork. The first one is my ‘older brother’ Dogolu showing off his magnificent new rifle, just bought from a local blacksmith. These are the type of flint-lock front loading muskets we in Europe made till 1814; the Dogon still make them and have found the ultimate use of guns: to make loud bangs during a funeral; the second one is this anthropologist (‘somewhat’ younger) dancing with a – quite small – gun myself, and the last one highlights the perennial and crosscultural fascination with guns: Dogon boys fabricate from sorghum stalks ingenious contraptions that can really fire a piece of stalk: a millet gun. Guns make wonderful musical instruments, but let that be enough.