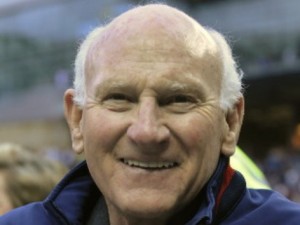 I was saddened to hear today that a central part of one of my fondest childhood memories is no longer here. Baseball great Harmon Killebrew died this morning following a six month battle with cancer. He was 74.

As a youth I remember watching Killebrew play in games on TV. As an adult I learned that he was the most honored of the dozens of Mormons who have played in Major League Baseball, the only one to make the Hall of Fame. [One other player who was baptized as a child, but no longer claims to be Mormon, is also in the Hall of Fame. By my count a total of 75 Mormons have played in the majors.] He is still #11 on the list of those who hit the most home runs, with 573.

More recently, I’ve also learned that Killebrew, despite his apparent inactivity in the Church, is still a good example for the Church. Killebrew is now known for his generosity and charity, as well as for simply being a very nice man (the tributes to Killebrew here are enlightening). In addition, as I understand it, his family is largely active in the Church.

For all our emphasis in the Church today, it is nice to remember that activity in the Church is not always the same as being a good person.

8 comments for “A memory of youth draped in black”