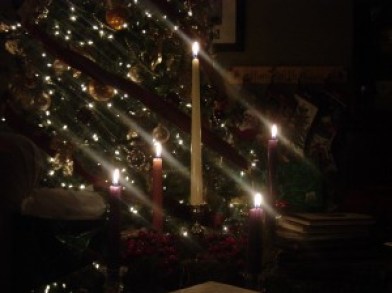 Our Advent wreath, lit on Christmas Eve in 2006, with the Christmas tree behind.

A recent spoof on Conan O’Brien that has made the rounds on the Internet highlights how little many outside the Church know about LDS practices. The hilarious skit, ostensibly in honor of a “Mormon Christmas,” points out that we really do not have many LDS-specific holiday traditions, at least not many that anyone can readily point to. There are ward Christmas programs a week or two before Christmas. There is the First Presidency Christmas Devotional at the beginning of December. And, as I wrote yesterday, for those in Utah, or perhaps farther afield thanks to PBS, there is the Mormon Tabernacle Choir Christmas concert. But there is not really anything that I would call an actual LDS worship service focused solely on Christmas.

There are, perhaps, occasional exceptions. My mother recalls attending candlelight Christmas Eve services growing up in her ward in Cedar City, Utah. When I was a bishop we did a special Christmas musical and scriptural fireside one year when Sunday evening fell a couple of days before Christmas. I have heard of other ward families that try to do something more devotional than the usual “ward Christmas party,” one even on Christmas Eve, but I have not heard of any Christmas Day services except on the rare occasion that Christmas falls on a Sunday.

The reality is that the focus in our community is, perhaps rightly, on family and family traditions. The challenge that many of us have, whether single, married, or families with children at home, is to see that these traditions help us focus on the meaning of Christmas in the face of the commercialization and materialism that have come to characterize so much of the season.

For many of us, these traditions are formed, or reformed and revised, when we first marry. Elaine and I spent the second Christmas of our marriage in a little home in west Provo that we had purchased only four and a half months before. Unlike our first married Christmas season, which we had split in succession with both sets of our parents in Tennessee and New Jersey, our first Utah Christmas was spent alone. We had much extended family in the state, to be sure. Nevertheless, Christmas Eve and Christmas morning were spent with just the two of us. Like all new families, this gave us the chance to begin building Christmas traditions of our own—many borrowed heavily from our own families’ practices, but some completely new to us.

On that first Christmas, one of my aunts gave us a spiral-bound booklet that contained scriptures, suggestions for carols, and Christmas stories, one of each for each day of December. From that year on we have had the tradition of preparing for Christmas by taking time each evening in December to read a Christmas story, recite the day’s scripture, and sing a song before our family prayer. When Rachel joined our family, and as she got old enough to sing along and later take turns reading, this became an important part of our family’s Christmas season observance. I took to calling our increasingly worn little book our “Advent Book,” because, like the Christmas calendar of my youth that my sister lovingly recreated for us the first year after Rachel was born, it helped us focus on the meaning of Christmas. 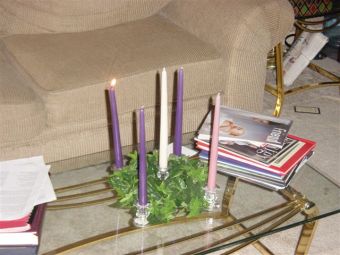 Our earliest ADvent wreath, lit on the first Sunday.

Later we added the practice of observing Advent itself, the tradition in many Christian communities of marking each of the four Sundays before Christmas with special readings and songs, accompanied by the lighting of candles marking the approach of Christmas. We adapted the practice, incorporating LDS scriptures that focused on the traditional Advent themes of the hope, love, joy, and peace that come through the gift of the Christ. The following links are to my Advent Web site, including the latest version of our Christmas Season Book, which includes scriptures chronologically arranged for each day in December, together with carols and stories:

We later added the tradition of setting up our Nativity set on the First Sunday of Advent.  This is often (not always) the Sunday after Thanksgiving.  Since we usually decorate our Christmas tree for our first Family Night in December, this starts our Christmas season very Christ-focused, even before we start doing other traditional decorating. 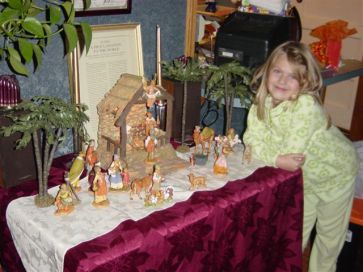 Rachel at about five years-old with our Nativity creche 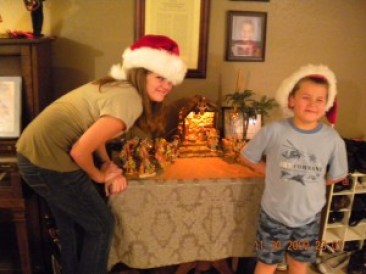 Setting up this year's Nativity on the First Sunday of Advent.

I get varied responses when I tell other saints that we observe Advent. Some wonder whether I am of German extraction or served a German mission, because Advent is particularly prominent there, Martin Luther having continued it because he felt that it served an important pedagogical purpose. Some of you may recall that two years ago in his First Presidency Devotional address, President Uchtdorf spoke of his growing up observing Advent. Others warily observe that it seems “awfully Catholic” or perhaps Anglican or Lutheran.

I am always bemused by this. Most of us Latter-day Saints indulge heartily in a holiday that has some of its roots in Roman practice, takes much of its symbolism from Germanic pagan religions, and often centers on a mythology that revolves around a gift-giving fat man. Yet when we elect to borrow Christian traditions that are helpful in focusing us and our families on the message of God’s gift of his Son, that can seem strange, odd, foreign.

Tomorrow I plan to blog on “Christmas with Autism.” What started as a personally enriching practice for me and Elaine and then came to be a useful teaching device for Rachel has become a central and reassuring ritual for Samuel, helping him prepare for Christmas in more ways that I could ever have expected.

← What the Smith Boys Said This Year
Calling All Introverts →

20 comments for “An LDS Observance of Advent”