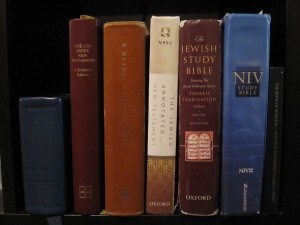 (Cross-posted at Benjamin the Scribe) We’re 80% of the way through our Old Testament, and the time has come to start looking forward. As I did for the Old, so I will do for the New. This time, I’ll break it up into a few posts, probably a few weeks apart. (Part 2, Part 3 are here.)

As before, the absolute best and easiest thing you can do to increase the quality and frequency of your Bible study is to supplement your KJV with a different translation. You can do it with a free app or website, or go old school and buy hardcover. I do both. Below are some recommendations on Bibles. (If the idea of reading a non-KJV application bothers you, see my Religious Educator article at the bottom, which includes Apostolic examples of non-KJV Bible use in The Ensign and General Conference.)

These tend to be a little quirkier since they are produced by individuals, but no less interesting.

If you want to understand the Greek textual/manuscript basis for differences in translations, these are your two resource.

Things on the KJV, How We Got the (English) Bible, LDS and the Bible

← Do Women Count?
Meeting the Mormons →

22 comments for “Recommended NT Resources, Part 1: Translations, Text, and the Bible in General”