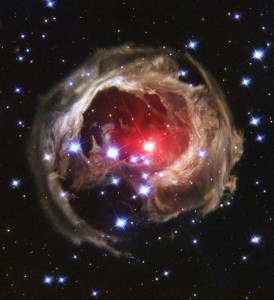 General Conference is the central forum for official instruction in Mormon doctrine. Conference has very wide viewership among church members, and its influence is magnified by the widespread reach of Conference talks in the Ensign.

The last General Conference in which Kolob was mentioned — the star where God lives — was in 1969.

In 1969, President McKay briefly alluded to the idea of Kolob as an actual belief:

Members of The Church of Jesus Christ of Latter-day Saints always have known through revelation of the numberless creations of God. They are taught that somewhere out in that great expanse of space is the great star Kolob that we sing about in the hymn “If You Could Hie to Kolob.” Abraham of old was shown in vision these kingdoms, and he said: “And I saw the stars, that they were very great, and that one of them was nearest unto the throne of God; and there were many great ones which were near unto it;

“And the Lord said unto me: These are the governing ones; and the name of the great one is Kolob, because it is near unto me, for I am the Lord thy God: I have set this one to govern all those which belong to the same order as that upon which thou standest” (Abr. 3:2-3).

The idea shows up in a few other conference talks from the 1960s. For instance, Church Patriarch Eldred G. Smith spoke of Kolob in 1966, and then-Elder Spencer W. Kimball in did the same in 1962. President McKay briefly mentioned the idea in 1960, William W. Critchlow Jr. in 1964 (Elder Critchlow was one of the Assistants to the Twelve), Joseph Fielding Smith in 1966. Then-Elder Harold B. Lee quotes the hymn in 1969.

The total number of references to the doctrine of Kolob in general conference talks since 1970 is Zero.

(The word itself does appear twice. In 1979, then-Elder Howard W. Hunter quoted a passage from the diary of Wilford Woodruff: “President Woodruff told of his missionary experiences. He said: ” In the time of the apostasy in Kirtland… the Spirit of God said to me, You choose a partner and go straight to Fox Islands.’ Well, I knew no more what was on Fox Islands than what was on Kolob. But the Lord told me to go, and I went.” And in 1999, a speaker referenced the 1892 Kolob stake.)

To repeat: The last time that Kolob was taught as a doctrine in General Conference was in 1969. Neil Armstrong had just stepped on the moon, a few months earlier. Richard M. Nixon was U.S. President. Credence Clearwater Revival was having a great year, with their new releases Proud Mary, Green River and Bad Moon Rising dominating the charts. Woodstock had just happened.

The church had thirteen operating temples and an estimated 2.8 million members. It would be almost a decade before African-American men would become eligible for Priesthood ordination. Heck, there were still Assistants to the Twelve.

This was the last time the idea of Kolob as doctrine came up at General Conference, which is the premier space for Mormon doctrinal instruction.

The complete absence of Kolob doctrine for over forty years in conference discussions strongly indicates that the doctrine has in effect died through desuetude.

And given that backdrop, it is deceptive and false for church critics to ignore very clear trends in recent history and suggest (as they often do) that Kolob continues to play some central role in Mormon belief or lived Mormon experience today.

← The Crucible of Doubt – A Review
Losing Our Youth? →