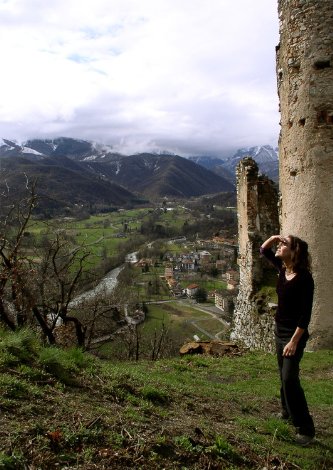 As our one really unique Mormon holiday, Pioneer Day gives us a chance to look back and reflect on our ancestors and others who went before and made our way easier through their good lives and sacrifices. I think of it as a sort of celebration of our collective quest to turn the hearts of the children to the fathers. And because I love traveling and getting to know new places, thinking about my ancestors always involves a lot of thought about where they originally came from, and if I’m lucky, not just thought, but plane tickets and itineraries. Almost four years ago, I was living with my family in Italy. We’d gone there chasing a sort of genealogical dream, and now we were sitting in a chapel in Turin, Italy, watching live coverage of the Prophet speaking from Rome.

President Monson was in Italy breaking ground for the long-awaited and prayed-for Rome Temple. With him were Church leaders from all over Italy as well as Giuseppe Ciardi, the vice-mayor of Rome, and Lucio Malan, a senator from our own northern region of Piemonte. Senator Malan had made the journey from the far north of Italy to Rome because he belongs to a minority religious group called the Valdese–a group with which we had recently become intimately familiar.

The Valdese (Waldensians in English) are a small Protestant group in the Alps of Northern Italy who have a particular history with the Mormon Church. They began in the 12th century as earnest truth-seekers who saw the excesses of the Catholic Church in Rome and desired a return to the simpler, purer doctrines and practices of the New Testament. Through centuries of persecution, they clung to their faith and took refuge in their mountains to escape from invading armies. They even had secret caverns high in the Alps where they would gather and sing hymns, concealed from their enemies. In the mid-19th century, Lorenzo Snow and a few other missionaries brought the Restored Gospel to them. For some, it was the answer to generations of earnest prayers.

My husband Tony’s great-great-grandparents, Domenico and Henriette, believed the message brought by the missionaries and traveled over the ocean and the plains, eventually settling with many other Italian converts in a little valley in northern Utah that reminded them of their homeland. Over one hundred and fifty years later, we bought one-way plane tickets to Italy and walked into a government office with their birth certificates to claim Italian citizenship and make a home for ourselves near where they had once lived. Which was why we were privileged to be in Italy when the Rome temple was announced, and see the Groundbreaking.

President Monson, in his message at the Groundbreaking, said that he thought the faithful pioneers who had once lived in Italy and were now on the other side of the veil would be allowed to be present in spirit for this historic occasion. As he spoke, I could imagine Domenico and Henriette, every bit as excited to be there as we were to be there. If they were watching, their room was probably packed even fuller than ours, with Italians like them who had made the long journey to Zion in America, never dreaming that the stakes of Zion would one day be extended all the way to their homeland. Although their journey to Salt Lake and ours back to Italy had been challenging in very different ways, we felt as if we were a part of the same tapestry. President Monson’s final remarks about his oldest son, who served a mission in Milan, Italy echoed my feelings. He said that his son had prepared their whole family to feel “the spirit of Italy, which is very close to the spirit of God.” Looking over at my husband, watching the Groundbreaking with the little great-great-great grandson we’d named for Domenico sitting in his lap, I felt that the circle was complete. Our own little branch of the Italian olive tree had been grafted back in. We were, in some paradoxical sense, home.

In President Monson’s beautiful prayer dedicating the site for the Temple’s construction, he quoted John Ruskin, another lover of Italy:

Therefore, when we build, let us think that we build for ever. Let it not be for present delight, nor for present use alone; let it be such work as our descendants will thank us for, and let us think, as we lay stone on stone, that a time is to come when those stones will be held sacred because our hands have touched them, and that men will say as they look upon the labour and wrought substance of them, “See! this our fathers did for us.”

In the poem I wrote for Domenico and Henriette, I pictured them living their lives so long ago, raising their own temple in faraway Logan, and bringing up children who would understand their faith through the rich historical legacy they built. Watching this new temple be built in the beloved homeland they had left behind made me wonder if they had in some sense seen us and their many other great-great grandchildren, and done what they did at least partially on our behalf. I’m sure that as they stood on the ship and watched the only home they had ever known disappear into the horizon, they could not have imagined a temple being built in this land that for so long had tolerated no other religion. Yet here we were, witnessing the miracle built on the sure foundation of their long-ago faith.

When we build, we build for ever.

As we lay stone on stone, we think of you

We laid carefully long ago,

Seeking the path we left for you to find.

When we build, we see forever

Stretching before, and reaching back to us,

Following on a journey

We walked ages and lives before,

Footstep in marble footstep leading on.

When we build, we touch forever,

Tracing your outline, warm against the stone,

Shadows in every archway

Of your image against the sun,

When we build, we feel forever

Beat in our hearts like blood that will be yours,

Watching you stand in wonder

In a temple of promised dreams,

Whispering, “this our fathers did for us.”

← Upgrading Our Lay Clergy Model
A Baseball Team in Every Ward →