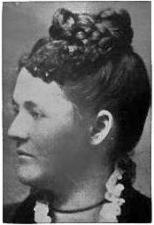 Parenting sometimes seems like a Mormon obsession. We believe it has a significant effect on the success of children both in this life and in the life to come, so it is often the subject of Mormon sermons and lessons, such as chapter 16 of the Joseph Fielding Smith manual.

Its author, Ellen Jakeman, was born in 1859 in Beaver, Utah to John Percival Lee, a schoolteacher, and his wife, Eliza Ann Foscue. An intelligent woman with strong convictions, Ellen married a soldier, Elias Sims, at 17 and bore him a daughter, before the marriage failed. Returning to Beaver, she next married James T. Jakeman, member of a prominent family, at age 19. The couple moved among several central Utah towns, publishing newspapers. Ellen was an active participant in these efforts, both writing articles and typesetting the text. She had strong opinions, favored the underdog, and was never afraid of expressing her opinion. She soon became a proponent of women’s suffrage and wrote articles for the Women’s Exponent, Young Woman’s Journal and the Western Galaxy in addition to the newspapers she and her husband published. She also published a pamphlet-length poem, The Border Scout, in 1888. However, business reversals and her husband’s problems with drinking and gambling led Ellen to divorce him in 1894.

Ellen then lived in Provo, where she became active in politics, serving as the first woman treasurer of the Utah County Democratic Party and opposing B. H. Roberts at the 1898 State Democratic Convention. She was the business manager for the Young Womans Journal and wrote for the Deseret News. She married again in 1909, but then divorced for a third, and last time. After her third marriage, Ellen’s literary output diminished significantly. But she continued writing until her death in 1937.

My Child and Thine

The long day ends. My little weary child
Comes confidently to my sheltering arms,
And nestles on my bosom restfully.
The long, dark night has for her no alarms.

My Father, when earth’s day is done for me
May my soul rest confidingly on Thee.

The dainty dress was torn – shoes stained with mud,
From paths forbidden to her straying feet.
I could not punish, for her tears fell fast,
Her sorrow and repentance seemed complete.

When my feet stray, O Father, Friend, and God,
Accept my tears, and spare the chastening rod.

Is she not mine? and so I understand
Her wayward moods – the spring of her desires.
When patience should be given, long drawn out,
And quick response to earth’s celestial fires.

When I am wayward, stretch out mercy’s hand,
Thou art my Father, and will understand.

There is no thought between us as she sleeps,
Of strife that marked the passing of the day,
I smile, remembering but the dear, sweet things
The hands or lips have found to do or say.

Bury my sins, O Father, fathoms deep,
When on Thy bosom I shall fall asleep.