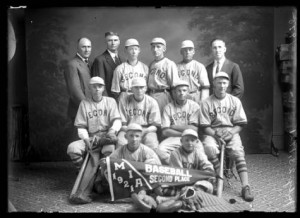 In the late 16th century Henry IV of France expressed a desire that everyone in his realm would “have a chicken in his pot every Sunday.” That idea showed up again in Herbert Hoover’s promise of a “chicken in every pot”—the politician’s promise of prosperity.

For lovers of baseball, that does sound like a kind of prosperity. However, it is clear from the following excerpt that it was intended to ensure the physical and recreational well-being of the “M Men” — what today we would call young adults:

Some Things the “M” Men Can Do

Of first interest to the young men, along this line, will be athletics and outdoor exercises. If possible, each ward should have an organized baseball club, and each stake should have an organized baseball league, so that there will be something to occupy the young men during the entire summer season in outdoor activity exercises of a competitive character that will give them something to think about, to fight for and to work for.

Then you can have for evening work, dramatics. See to it that encouragement is given by this organization of “M” Men, to dramatics, so that you can bring in the talent of your wards and give them something to present to the public, serving at least two purposes, activity—occupation for the boys themselves—and entertainment and education for the people of the ward. Then you have your Fathers and Sons’ outings. You know something about them. Get your fathers and their sons together, have an outing, a time of pleasure, recreation, education, and training for the boys and for the fathers, in association together. You can have your mountain hikes. All of these and many others I can not mention for lack of time, are outdoor activities for the “M” Men.

One of the things lost when the Church converted the MIA program into today’s Young Men and Young Women’s programs is the emphasis on life outside of the Church. Things like recreation, physical fitness, and non-religious knowledge, while still taught in Church, are no longer a significant part of the Church’s program—we are to find these things by interacting with organizations outside of the Church.

And it seems like that trend has increased over the years—the ward softball and basketball teams of my youth are long gone as far as I can tell. Perhaps that isn’t the role of the Church, but hasn’t the result been that many Church members get little or no physical exercise instead of moving them to physical exercise and recreation in their communities?

Perhaps our history should give us pause.