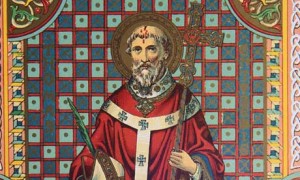 “Will no one rid me of this turbulent priest?”

According to popular tradition, this is the line that King Henry II blurted out after repeated disagreements with Thomas Becket, Archbishop of Canterbury. (There are several variations, such as “who will rid me of this meddlesome priest?”) Four of Henry’s knights interpreted this as a royal command and set off for Canterbury, where they slew Becket while he prayed at the altar.

How should we understand the knights’ actions? Should we view them as following orders, or as acting on their own initiative? There are multiple possible interpretations. For instance, if we take an approach that “whether by mine own voice or by the voice of my servants, it is the same,” we might attribute the knights’ actions to Henry, whose actions set the events in motion.

However, an official press release states that all decisions were made by local knights and not directed or coordinated by King Henry.

And who are we to question an official press release?

A few folks have asked for clarification. So, let’s clarify what I’m saying, and not saying, in this post.

First, as hopefully an obvious point, I don’t think that church leaders are murderers. I’m making a historical comparison to elements of the history of Henry, but that doesn’t include the entire history. We can (and regularly do) compare people with historical figures without including all aspects of the figure in question. I can say someone is like Ammon without implying that they chop people’s arms off. And I think we can bring up the Becket case without suggesting that church leaders are murderers. I hope this is clear from the outset, but I’m happy to explicitly state it as well.

Second, the timing of the joint excommunication letters is highly suspicious, to say the least. John Dehlin has been doing his thing for ten years. Kate Kelly has been going for over a year. For the hammer to drop RightNow on both of them, independently, seems vanishingly improbable. However, the official Newsroom statement is that “Decisions are made by local leaders and not directed or coordinated by Church headquarters.” I don’t think I’m the only one who finds that stretches credulity.

Does this mean that there was some conspiracy at the church office building, dead drops at midnight, messages transmitted in code? Actually, I’m saying the _opposite_ in this post. I don’t see any reason to think this was a cabal of masked conspirators. I do think it’s quite possible that someone’s off-the-record comments were interpreted as an order. That would explain the timing. And hey, isn’t that kind of like Becket? (Or for that matter, like claims regarding recent IRS investigations — that President Obama made statements about conservative groups, and then IRS officials decided to aggressively investigate those groups.)

Finally, some folks have suggested in conversations that the Newsroom statement is technically accurate, as a precisely worded non-denial. For instance, it doesn’t say that actions weren’t initiated centrally, just that they weren’t “directed or coordinated” centrally.

That may indeed be the case. I don’t know.

But if we’re really dealing in carefully worded not-quite-denials that barely skirt the border between “it depends on what the meaning of is is” and outright lies, then isn’t that really part of the problem?

← Mourning with those that mourn
Priors →

37 comments for “Will No One Rid Me of This Turbulent Priest?”