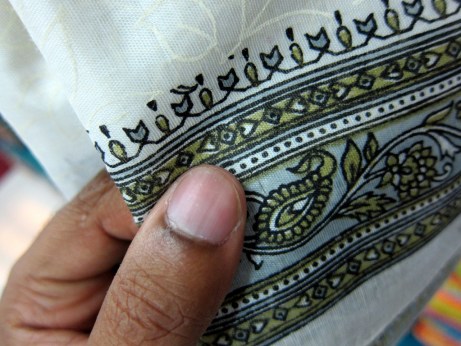 I find the story of the woman with the issue of blood, found in all three Synoptic Gospels, both odd and beautiful. Like most of the recipients of Christ’s miracles, she excites sympathy within me. Twelve years is a long time to be sick, especially with an illness that renders you and anyone who touches you perpetually unclean. She must have been lonely.

It makes me wonder how many times she did get touched during those years–how many people braved the social and religious taboo to offer her a bit of human care or comfort. Did she have a family? Was she abandoned because of her affliction? Did her ritual uncleanness make her feel personally and spiritually unworthy?

The Scriptures tell us that she had spent “all her living” on whatever passed for medical treatment in her day. Not only did the treatment fail to heal her, but she actually grew worse. The resultant poverty must have added to her sense of social isolation. Her condition, serious enough as it was to warrant her spending everything she had in an attempt to cure it, probably also kept her from many of the normal tasks of everyday life. How did she live? Was she able to care for herself and her needs? Did someone else allow her a place to stay, despite her chronic ritual impurity? Did some spiritual progenitor of Mother Teresa see beyond her untouchable state and reach out to love and care for her?

The details of her miracle are poignant too. She did not plan to face Jesus and request healing. Perhaps she was afraid that he would not wish to touch her. Maybe she was shy and embarrassed. Or maybe it was just that in her weakened physical condition she did not feel she had a chance of attaining a good enough spot in the crowd to afford her the opportunity of speaking with him. Whatever the reason, instead of bothering him with her need, she settled on another plan. If she could only touch his clothing, she thought, she would be healed. It’s a rather extraordinary idea. Was this a rumor that was going around about Jesus? Did she come up with the idea herself? Was it inspiration?

At any rate, she did carry out her plan. She somehow managed to get herself in the vicinity of where Jesus would be passing. Joining the crowd that followed behind him, she reached out and touched the edge of his clothing. And she was healed. That’s my favorite part of the story. Not only did he not intentionally heal her, but he seems to have been completely unaware of her presence up to this point. I don’t recall another miracle that seems more magical to me. It’s like the physical person of Jesus naturally exuded healing power, and just touching his robe was enough for that power to pass to her. I can’t help but think of my kids experimenting with static electricity and the visible spark that passes between us when they touch me.

Even more interesting is that Jesus noticed. In the accounts of both Mark and Luke, he knows intuitively that “virtue” has gone out of him. It’s as if he felt the electrical tingle too. Or perhaps he sensed the yearning of a quiet soul. Not unreasonably, his disciples roll their eyes at his assertion, looking around at the press of the crowd and stating the obvious: that the entire multitude of people is thronging around him, and probably a good portion are indeed reaching out in an attempt to touch him. Still, Jesus persists in asking who touched him.

Realizing that he somehow knows, the woman reluctantly reveals herself. As someone particularly averse to awkward social situations, I can imagine that it must have been difficult for her to own up to the act she had intended to do in secret. Whatever her reasons, she had not meant for the touch to be noticed. And even at this point, she still could have slipped off into the crowd, content with her secret miracle. Perhaps she was afraid that there was no escape from a man with such extraordinary perceptive powers. But I like to think that she heard something in his voice–an invitation, a touch of grace and loving acceptance.

She was still afraid–not only afraid, but trembling. But she came forth, as he asked, and declared her story and the miracle that had been done in her. In turn, he gifted her with a tender version of his characteristic response: “Daughter, be of good comfort: thy faith hath made thee whole; go in peace.”

A long twelve years
To wait for healing and for light,
Then through her tears
To touch his robe and feel it right

And in that hour,
Her heart and secret hurt made whole,
She felt his power
And something answered in her soul.

The crowd pressed on
And took him far beyond her gaze.
Yes, he was gone
And she would seek him all her days.

All at once he turned;
Somehow she felt he called her name.
Her spirit burned;
She hid her trembling hope in shame.

Yet when he said,
“Who touched me,” soft, and strangely sweet,
She raised her head,
Then fell and worshiped at his feet.

← For the Beauty of the Earth
The Laura F. Willes Center for Book of Mormon Studies →