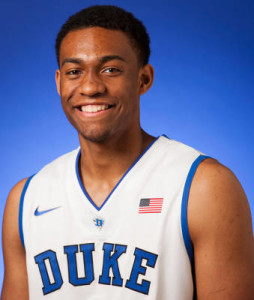 Today the NBA announced a landmark agreement with the LDS Church to ensure that Jabari Parker’s desire to serve a mission does not interfere with his draft prospects, saying the church has agreed to their proposal to call Parker to serve as a missionary in the city of the NBA team that drafts him.  While the official statement is brief, sources close to the negotiations report that because the NBA considers Parker to be a certain star, league officials, including new commissioner Adam Silver, went to unprecedented lengths to ensure that Parker enters this year’s draft.

The deal stipulates that Elder Parker will proselyte and live with missionary companions, like other volunteer Mormon missionares, except that, since Elder Parker will be an NBA player, he and his companion will attend all of the team’s practices and games.  The NBA has even given permission for Elder Parker’s companion to sit on the team bench in missionary attire during games to comply with mission rules, and has guaranteed that the companion will be shown at least twice during every televised game.  The league also made other concessions to secure the church’s cooperation, including donating a box suite for the local mission to use for entertaining investigators.

Joe Dumars, President of Basketball Operations for the Detroit Pistons, is excited about the proposal, saying it raises Parker’s draft prospects even higher, “There’s not a GM in the league who wouldn’t like having two clean-cut Mormon missionaries traveling with their team to reduce late-night carousing, and motivating the team in the locker room with heartfelt prayers.  Can you imagine how long me, Isaiah, Laimbeer and Rodman could have stayed at the top if we’d been surrounded by that kind of spiritual stature?”

Church spokeswoman LaDawn McConkie says the church expects Parker’s mission president will be flooded with requests from missionaries asking to be Parker’s companion, but it’s all part of a president’s demanding job.  According to ESPN, the mission presidents in the cities with teams most likely to win the draft lottery are already making plans.  Keith Harris, president of the church’s Wisconsin Milwaukee Mission, told ESPN’s Ric Bucher that he’s asked his missionaries to fast this Sunday to ensure Parker becomes a Milwaukee Buck.  “Ever since the Bucks started setting NBA loss records I had a feeling their abysmal season was all part of a higher purpose, so with this announcement I’m not about to sit back and watch the missions in Orlando or Philadelphia win Parker because we’re not worthy.”

Denver Nuggets owner Stan Kroenke praised Silver’s foresight, “The commissioner really pulled out all the stops.  Just announcing the NBA Free Book of Mormon Night is certain to cement fan loyalty. Our season ticket holders love basketball, beer, and half-time entertainment, but when they hear they’ll get a free Book of Mormon, too?  We’re already discussing internally what to do with all the extra money.”