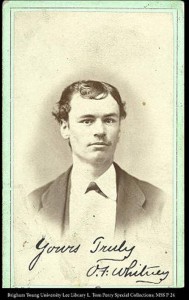 Today, we Mormons see the “coincidence of names” between Joseph of Egypt, Joseph the son of Lehi and Joseph Smith as anything but a coincidence. They shared names allow us to make connections between the three cases, adding to our understanding of their histories. And Old Testament Gospel Doctrine lesson 12 allows us to revisit some of the parallels, such as Joseph’s separation from Israel, and eventual reunion, as well as his visionary nature.

Elder Orson F. Whitney, who served as an Apostle from 1906 to 1931, recognized this connection, and included it in his epic poem Elias in the following extract.

In addition to serving as an Apostle, Whitney was a strong proponent of Mormon literature. Born in 1855, he worked as a politician, journalist, poet, historian and academic. He was a journalist for the Deseret News in 1878, edited the Millennial Star while serving a mission in Europe in 1881 and taught English at Brigham Young College in Logan in 1896. In 1899 he was called as Assistant Church Historian, serving in that position until his call to the Quorum of the Twelve in 1906. In 1888 Whitney, then serving as a Bishop, gave his “Home Literature” talk, widely credited with transforming Mormon literature1. Whitney wrote several hymns currently in our hymnal, and the epic poem Elias. He died in 1931.

Excerpt from Elias: An Epic of the Ages,
Canto Six, From Out of the Dust

Again, athwart the wilderness of waves
Surging old East and older West between,
Where the lone sea a flowery southland laves,
And Zarahemla reigns as ocean queen,
Braving the swell, a storm-tossed bark is seen.
From doomed Jerusalem, to Jacob dear,
Albeit a leper2, groping, blind, unclean,
Goes forth Manasseh’s prophet pioneer3,
Predestined to unveil the hidden hemisphere.

His lot to reap and plant on this rare shore
The promise of his fathers: Joseph’s bough4,
From Jacob’s well, the billowy wall runs o’er;
Abides in strength the archer-stricken bow,
Unto the utmost bound prevailing now,
Of Hesper’s heaven-upholding hills. Bend, sheaves
Of Israel, as branches bend with snow,
Unto his sheaf grown mightiest! Here, as leaves
For multitude, the son the great sire’s glory weaves.

Ere chimes for him the earth-departing hour,
Summoning a weary soul to restful toil
In risen worlds, where life puts on all power,
Lehi his house convenes,—their hearts the while
Aglow beneath the burning words that pile
A pyramid of prophecy whose spire
Empierces heaven,—and lest they soil
The prospect pure, and tempt Jehovah’s ire,
Warns them ‘gainst ways of pride and paths of dark desire.

He speaks of Joseph’s, Judah’s, destiny;
Of blighting and of blessings yet to pour;
Proclaims deliverance his own shall see,
When cometh one the wandering to restore;
Forenames a chosen seer5 (revealed of yore,
When the boy dreamer’s star o’er Egypt rose),
Bringing from dust a blest land’s buried lore6.
Seals then his benison, and eyelids close
To wake on worlds divine, whither, past all, he goes.

This Old Testament lesson speaks of exactly the time “When the boy dreamer’s star o’er Egypt rose,” something that happened to the other Josephs in various ways. The other prophets are also “dreamers” and much of their stores involve separation and reunion with their families—although not in the same way as Joseph in Egypt does. An echo of this story can also be found in the story of Christ, whose father, also Joseph, flees to Egypt for refuge and safety, separating in this way from Israel and the land of his nativity.

The story in this lesson also echoes later events in a less obvious way. It is Joseph’s connection with God, his visions of the future, that provide the salvation for his family and bring about their eventual reunion. The same might be said of Lehi and his people (collectively Joseph because they are his descendants, and the “fruitful bough” that finds refuge “over the wall”), since dreams and visions drive their flight for refuge, and their work ends up providing a way to feed spiritually the House of Israel and will spiritually and physically bring about the reunion of Israel. Similar things might be said of Joseph Smith, whose visionary role has separated the believers out of the world, and hopes to unite all. And, finally, it is a vision that leads Josph to flee with Mary and Jesus to Egypt. They return and the Christ feeds the world in a way that no one else can, leading to the ultimate reunion in the life after this, when each of us will know even as we are known.

Are these connections coincidence? Perhaps. But somehow these parallels build my faith anyway.

← Literary Joseph Fielding Smith #08: What fair one is this, from the wilderness trav’ling
Human Evolution: Problems and Possibilities →