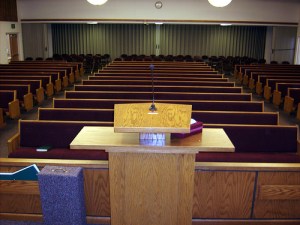 “Out of curiosity, what makes you believe in Mormonism? Or God for that matter?”

This is a question I got from a close friend, more or less out of the blue, the Wednesday before last in a Facebook conversation that had been—up to that point—mostly about how much I love Jim Butcher’s Dresden Files.

It’s not like it’s the first time I’ve been asked that, but it’s a question I’ve struggled unsuccessfully to answer in the past. I’ve tried on more than one occasion to sit down and write out my reasons, but I always failed. Eventually I gave up.

And then, last week, I found that the answer had been there all along. And it was pretty simple. Looking back, I’d say that was the problem. For all I love to write about epistemic humility, doubt, and uncertainty I have just about the simplest and most conventional Mormon testimony that it is possible to have. And maybe, in the past, I’ve been a bit ashamed to admit that there’s nothing special, profound, or unique about my testimony. I guess I just thought I was too good for my own testimony.

That was half the problem, but there’s another half, too. My other dirty little secret is that for all the time I spend talking about doubt and uncertainty, when it comes to my religious faith I just don’t have serious doubts in the way that most people understand the term.

That doesn’t mean I’m insincere when I focus on a concept like epistemic humility. First, it really is very important for me that we make room among the Saints for those of us who doubt. It’s the only sensible thing to do based on D&C 46. But there’s more to it than that.

I have seen men and women smarter and better than me in every way go through dark storms and come out broken and confused on the other side, their faith reduced to incomprehensible shards in their hands. I’ve watched them struggle back, too, and build a newer and a stronger faith. But there’s an incredible period of vulnerability once you’ve fallen from such a height. And so I’ve got a very real and pressing interest in making the sure that the pews are comfortable for those who wrestle with uncertainty. One day the storm-wrought shipwreck could be my own.

So far, however, it has not been. So far the reasons for the hope that are in me are the same as they always have been. So this is my simple testimony, in two parts. First, I have always had a conviction that I have a home outside this world. I cannot provide any grand or significant basis for that conviction, but it has been with me as long as I have any memory of my mortal life.

Second, I have received personal evidence of the reality of the things we talk about, from God’s love to the power of angels to protect His children. Not every prayer has been answered, but there has never been a time in my life when I mustered the courage to go out on a limb for my Lord and He left me there hanging. (There have, by contrast, been too many occasions when I simply lacked the courage to put my faith to the test.) I have witnessed miracles on multiple occasions, some private and some public. And really: how many signs should it take? And yet despite all of this, I am still terrified of death at times and cannot find any comfort from an emotional conviction that I will live on after this life after all. There are times when, to be quite frank, it all just seems rather silly, this whole religion and God thing. This doesn’t give me a good reason to doubt my faith. It just shows me how fickle human perception can be. At the end of a long, dark, and cold winter I find that summer’s warmth takes on an illusory sense in my mind. Intellectually I know that in July stepping outside in a sweatshirt (in Williamsburg, VA) will seem insanely oppressive, but with the biting wind making my teeth chatter it’s hard to really feel any conviction about that fact.

That is one kind of doubt I most assuredly have. When I set aside my spiritual duties my testimony begins to fade. But not because I have found some new evidence that makes it seem less credible. It’s just because in the winter it’s easy to forget summer’s heat. When we focus too much on the things of a world that is alien to our Lord, we lose the ability to see truths that would otherwise be right before our eyes.

That’s the real reason I have for spending so much time thinking and writing about theology. It keeps the things that are important to me real to me. I take my theological questions seriously, but only as a buffer to protect my faith. Not as their ultimate font. Intellect can serve to preserve a patch of soil on which faith can grow, but it can’t provide the plant itself. I realize that the talk of using intellect to defend faith is one of those things that raises red flags for people, and on those flags is written the phrase: “wishful thinking.” I recognize that concern, but here’s why–in my particular case–I am not so troubled by it.

As a kid I had mild but noticeable OCD tendencies. I have a couple of patterns that I repeat endlessly by tapping my fingers or my feet, or by playing with the CTR ring I still wear on my right hand. (It’s a silver one my mother got me when I was 18, not the kind we hand out in primary.) I used to need to check, by touch, to see that I had locked a door. And then check it again. And again. And, as Orson Scott Card so eerily wrote about in the later books in the Ender series, these OCD tendencies had a religious aspect as well. I would often feel the need to repeat my night-time prayers again and again and again. And then again and again, because it just never seemed like I could be really sure I had done it right.

This was confusing then, but it’s actually become a strength to me now. Because now I know quite well that there are different kinds of voices in my head, and that some of them are not worth listening too. I understand the subjective nature of personal revelation. That’s where the question “How do you know you didn’t just invent it?” comes from. The response I’ve found in my life, although I stumbled upon it by accident, was to engage in some trial and error. Over many years of struggling with random impressions I have gained the benefit of being able to recognize a lot of impressions that aren’t spiritual.

Am I certain? No, I am not. I haven’t been certain of anything in my life since reading Descartes’ Meditations in an undergraduate philosophy course. It may sound hokey, but I was a person who really, really believed in the idea of certainty and I was 100% behind Descartes’ whole project. I followed his logic down every step of radical doubt until he got to his famous “I think, therefore I am.” But then, when he tried to assemble his new vision for certainty I couldn’t follow him back out of the hole he had dragged us both into. I’ve been stuck there ever since. Certainty isn’t part of my life anymore.

So no, my faith in God is not certain. But neither is my faith in any part of reality. As far as I can tell, there really is no certain basis for believing that I’m not a butterfly dreaming I’m a man. Maybe we’re all in the Matrix. How would we know? This might seem to have limited practical utility, and that’s probably true, but it does a pretty amazing job of putting doubts about Lamanite genetics into perspective. We live in a world where anyone who claims to understand the rules that govern our universe is lying or deluded[1] and where the idea that our entire universe is a giant simulation is taken seriously[2]. So, yeah, I understand that there are legitimate reasons to doubt and be concerned about the existence of God or the historicity of the Book of Mormon but those doubts just don’t cast quite as long a shadow as they might once have.

And so it is that despite the fact that I advocate folks feel free to use the phrase, “I believe” to replace the over-used “I know,” (and I’ve tended to use it myself, just to make a point), the reality is that if I were to state my testimony as accurately as possible, it would begin with a very sincere, “I know, as much as I know anything,…”

[1] “Anyone who is not shocked by quantum theory has not understood it.” – Niel Bohr and also “I think I can safely say that nobody understands quantum mechanics.” – Richard Feynman

[2] There have been a lot of articles written about this, some more serious than others, but here’s just one easily-accessible pop account to get you started.

28 comments for “As Much As I Know Anything”