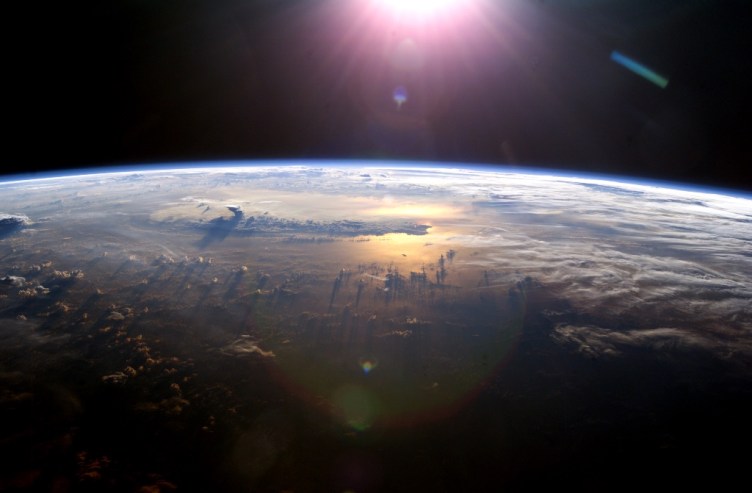 I agree with Jonathan Green’s description of how most Mormons tend to think about evolution vs. creation. To recap, we tend to:

As a general rule, Mormons are happy to embrace science and religion, and do not see a necessary conflict between the two. When it comes to the usual hullaballoo over religion vs. science, this is certainly correct. There just isn’t any particular reason to care very much whether God created Adam and Eve using natural selection or some other means.

However, there is a more subtle conflict. It exists between the continuity of the evolution narrative and the way we talk about humanity as a discrete category. Here is one example of the problem from a typical statement of Brigham Young’s:

The ordinance of sealing must be performed here man to man, and woman to man, and children to parents, etc., until the chain of generation is made perfect in the sealing ordinances back to Father Adam. There must be this chain in the holy Priesthood; it must be welded together from the latest generation that lives on the earth back to Father Adam. [J.D. 18:213 emphasis added]

Clearly Brother Brigham had in mind a sense of completeness that can only exist if there is an individual starting point: an Adam and Eve. Here’s another example:

37 And the Lord God spake unto Moses, saying: The heavens, they are many, and they cannot be numbered unto man; but they are numbered unto me, for they are mine.
38 And as one earth shall pass away, and the heavens thereof even so shall another come; and there is no end to my works, neither to my words.
39 For behold, this is my work and my glory—to bring to pass the immortality and eternal life of man.

In this case, the implication seems to be that “humanity” is a kind of discrete category. Both of these statements seem to imply a binary category: you are human or you are not. But, based strictly on biology, there can be no such binary categorization. We tend to talk about human evolution in terms of discrete species—first came Homo habilis, then came Homo erectus, etc—but in reality the process of evolution is continuous. The idea of discrete categories is one part deliberate simplification, and one part accidental consequence of having few fossils over a very long time frame. If you were to actually go back in time and sort of fast-forward however, looking at each generation individually, there would be no possible way to say “this child is Homo erectus, but its parents were Homo habilis.” Ergo, there is no line of purely biological demarcation that would allow us to know who or what the Lord has in mind for his work and his glory. It’s just one long, unbroken continuum from modern Homo sapiens all the way back to the proverbial primordial soup. If it is God’s work and glory to bring to pass the immortality and eternal life of man but not single-celled organisms, one has to ask where the line gets drawn. Even if we suppose a continuous scale of immortality and eternal life (so that every creature fulfills the measure of its creation) there is still the problem that humans are treated as a unique category, and that can’t be supported biologically.

My point is not at all to argue that, because of this theological conundrum, we have to adopt a literalist view of Adam and Eve after all. I simply want to point out that there’s a tension here that isn’t trivial.

While we’re on the topic of defining humanity, however, it might be interesting to try going the other way as well. I have an amateur interest in cognitive evolution, and it’s something I’ve been looking into recently. One of the central questions in that field is simply: what makes humans so smart? Most attempts to find a solution in brain physiology come up short because our brains are simply not that drastically different from other primates. What gets more interesting, however, is an investigation of the kinds of subtle differences that do exist. There seem to be basically two: human brains are innately good at handling complex social situations and they are also highly plastic (good at adapting and learning). 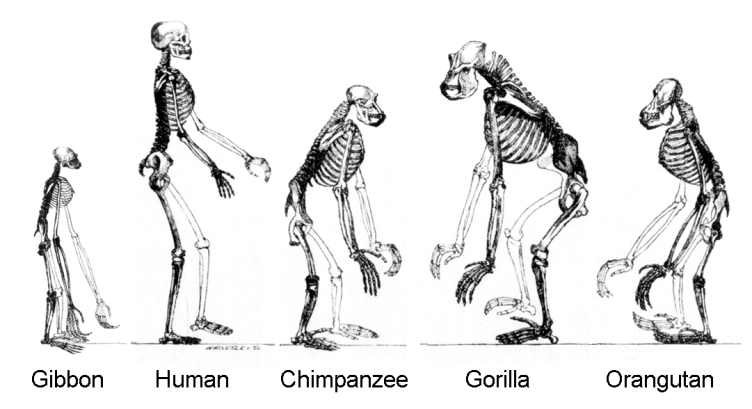 Think of it this way: genes can store a truly vast amount of information, but only a finite amount. When you consider the amount of information that has to be dedicated to building and regulating a complex organism, there’s only but so much left for storing complex behavior. In addition, information learned by an organism during its life cannot be passed genetically to the next generation. In both senses, genes are a kind of intergenerational information bottleneck. Strictly genetic information is limited in both overall content and also in speed of learning.

The changes to the human brain are a hack around this bottleneck. Instead of loading in a bunch of complex behaviors, the human mind is instead tuned to learn from other organisms. This is not at all to say that humns are a blank slate. Instead, human brains are crowded with learning behaviors (as opposed to survival behaviors). For example, the amazing ability of infants to learn language appears to be genetic but an actual language (say French or German or Mandarin) obviously is not. We give up the ability to develop rapidly (most other animals are self-sufficient much, much faster than humans) in exchange for the ability to learn deeply from our environment and especially from our community.

This means that the information that defines a human being is not located explicitly within the genetic code. It is, instead, stored in society. You can think of it this way: DNA is like a local hard drive. A community is like the cloud. You can store vastly more information if you fill your local hard drive with just whatever is required to be able to assimilate and integrate information from the cloud. The relatively small physiological changes in a human’s brain (relative to a chimpanzees) lead to a dramatic difference in cognitive ability because those small changes unlock an entire new vista of intergenerational information transmission that dramatically increase both the amount of information available to any individual at any time and also the speed with which new information can be incorporated into future generations. Instead of waiting for natural selection to encode new behaviors in DNA, humans can just go read about the most recent discoveries in physics in a book, creating a positive feedback loop of learning that has fueled our rapid development for at least the last several millenia. 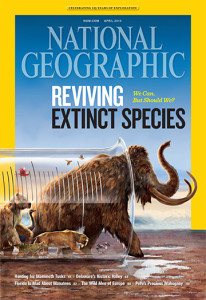 One way to conceptualize all of this is to think about “de-extinction.” That’s the idea that, using DNA, we can resurrect extinct species. Think: Jurassic Park. Now, we can’t bring velociraptors back any time soon because DNA breaks down too rapidly, but we can potentially clone a woolly mammoth. Critics of de-extinction point out, however, that bringing back the organism is only part of bringing back the species. Say you clone a woolly mammoth and implant the embryo in an elephant and all goes well. Now you got one woolly mammoth… sort of. Who is around to teach the little critter the behaviors that would have defined being a woolly mammoth? After all, even though humans depend much more on social learning and animals much more on instinct, even some behaviors are taught by parents to their offspring in the wild. At the end of the day, do you really have a woolly mammoth, or would you have just created a sort of Frankenstein’s monster, like a duck that has imprinted on a human and doesn’t know how to be a duck anymore? Maybe instead of a woolly mammoth you’d just end up with something more like a very shaggy elephant.

What this thought-experiment highlights is the extent to which information (rather than mere physicality) plays in defining what a creature is.

In that sense, humans are a social animal in a way that is much more profound than we usually think of when we hear the term. The crucial information that makes us who we are is not stored within our DNA. It is stored in the relationships between the individual members of the community. If, millions of years hence, aliens discovered that we had gone extinct and tried de-extinction out on us we know already that the effort would fail. They might get some human organisms and, if they were clever and similar to us they might successfully get a kind of alien/human hybrid that successfully live and function, but it wouldn’t truly be a human being. For example, they could revive a German with DNA from a long-dead German, but they couldn’t bring back the German language or any of the culture and history and habits and assumptions that a German today ha learned from his or her family and culture. Without our society and culture, we don’t fully exist. As isolated individuals, we are not human beings.

This is why I think there is a real conflict between our theology and evolution, but also that there’s probably nothing we can or should do about it right now. It suggests to me that, whatever God has in mind as the object of his work and glory, we’re not in a position to understand what it is. It almost certainly, however, doesn’t refer just to the biological organisms we know as Homo sapiens. Perhaps, for example, part of being “in the image of God” refers not just to our bodies, but also to our existence in society with one another. After all, the plural pronoun is used in the Creation account.

← Literary OTGD #12: excerpt on Joseph from From Out of the Dust
Some Ironies of Continuing Revelation →