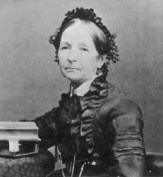 Abraham’s readiness to sacrifice Isaac is one of the most difficult to understand episodes in the Bible, and it is also a regular subject of LDS lessons, such as Lesson 9 of the Old Testament Gospel Doctrine manual. Despite its troubling nature, this event is seen as a clear type of Christ’s sacrifice, and it is often portrayed as an ideal of the righteous sacrifice we should ourselves be willing to make.

Both of these views of Abraham’s dilemna appear in LDS poetry, and the latter view—that we too are expected to sacrifice for sake of the gospel—is expressed in the following extract from a poem by Eliza R. Snow:

Mormonism’s best known poet, Eliza R. Snow joined Joseph Smith’s church before her brother Lorenzo did. She was later married to both Joseph Smith and Brigham Young and was the second General President of the Relief Society. She gathered some of her poetry into a two-volume work, Poems, Religious, Historical, and Political, which was published in 1856 and 1877. Ten of her poems are currently in the LDS hymnal, and several others once were in editions of the LDS hymnal, but have since been dropped.

“My heart is fix’d.” I know in whom I trust.
‘Twas not for wealth—’twas not to gather heaps
Of perishable things—’twas not to twine
Around my brow a transitory wreath,
A garland deck’d with gems of mortal praise,
That I forsook the home of childhood—that
I left the lap of ease—the halo rife
With smiling friendship’s soft and mellow tones—
Affection’s fond caresses, and the cup
O’erflowing with the sweets of social life,
Where high refinement’s richest pearls were strew’d.
Ah, no! A holier purpose fir’d my soul—
A nobler project prompted my pursuit:
Eternal prospects open’d to my view,
And hope’s celestial torch within me burn’d!
God, who commanded Abraham to leave
His native country, and to offer up
On the lone altar, where no eye beheld
But His who never sleeps, an only son,
Is still the same, and thousands who have made
A covenant with him by sacrifice,
Are bearing witness to the sacred truth.
.
…

I don’t doubt that many Mormons find this incident troubling. But if we look beyond the troubling aspects (such as being willing to take the life of another person and believing that God would want that), there is an important principle in the idea of sacrificing ourselves and our time, talents and blessings to building up the kingdom.  This is the sacrifice that Snow is talking about in the poem above. And it is this sacrifice that we understand to be for our own good, making each of us into the kind of people we should be.