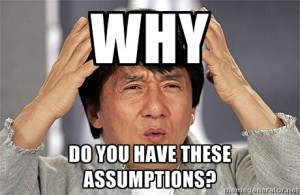 It’s rhetorical, I know why.

(I’m probably cramming too much into this mishmash of a post, but frustration over certain conversations has collided with academic stress and lack of time to refine it. I may regret it, so consider this a preview, a beta.) The expectations we bring to reading scripture can radically affect our reading, our faith, and our communities. One frequent assumption, traditional in many religions, is that revelation (and scripture, as a subset of revelation) must be monolithic, unified, in harmony, univocal, internally consistent. This is not the case, and it is not an accident.

Let’s back up, though, particularly as we get in to the Old Testament, and ask, what are our expectations of scripture? Are they properly calibrated?

I think we tend to read the scriptures for three reasons, devotional (performing piety and seeking communion with God), doctrinal (stripping away the “irrelevant cultural dross” to extract “True Doctrine”), and moralistic (expecting to find simple models of modern LDS principles and standards). Certainly, those are worthwhile things to do, though the last two are problematic in their assumptions. The Old Testament wasn’t written for those reasons. (Heck, it wasn’t really “written” at all, but no time to get in to that.) The last two goals in particular, because of the the faulty assumptions on which they are built, are likely to be thwarted unless you are highly selective in choice of passage and stick with KJV.

The first qualification for judging any piece of workmanship from a corkscrew to a cathedral is to know what it is — what it was intended to do and how it is meant to be used.
-C.S. Lewis

Here’s the thing. Scripture was not intended as eternally timeless and univocal instruction in all things. It is not meant to be a rigid, static guide  that we mindlessly accept and implement. Nor was it intended to model perfect attitudes and behavior for us to emulate. No one in the Bible ever says, “why can’t you be more like Abraham? He was such a good guy!” because the patriarchal narratives a) were understood to have other purposes for inclusion and b) the patriarchs aren’t always that great of people. They were not presented as ideal people to be followed, and if we try to read them that way, our expectations will not be met and we’ll be confused as to why our scriptures “aren’t working.” Well, son, it’s because that thing you’re trying to wield as a hammer is actually a screwdriver.

Most scripture was not written as detailed instruction on How You Should Live, but had other purposes (which I also can’t really get into here.) But as it turns out, the Israelites *did* have a body of instruction on how to live a proper life,  called Wisdom Literature (which was widely shared among different  Near Eastern cultures.) It’s mostly found in Proverbs, Job, and Ecclesiastes, which explains why most of us have never encountered it. What is most interesting and relevant is, well, let me show you.

Take Proverbs 26:5, which instructs to “Answer a fool according to his folly, lest he be wise in his own eyes.” Clarity!

But wait, your eye wandered onto the previous verse (damnable context! Can’t we just ignore it?) which says, “Do NOT answer a fool according to his folly, or you will be a fool yourself.”

What’s the scriptural fundamentalist to do? Is this an accident? A passage that we can dismiss as “not translated correctly” because it contradicts the next verse? No, it’s meant to be there. Both directives next to each other mean that they (and we) were intended to study, internalize, think, and weigh the appropriateness of each response for each situation, making mistakes, but growing in the process. Inspired instruction is not monolithic in this case.

So, multivocality or theological diversity may be there on purpose. It may also be there because of the principle of line-upon-line, but also because times change. That is, God spoke and speaks to different people in different times in different cultures, and scripture is a snapshot of that time and culture. That’s not the only thing Scripture is, of course, but we often lose sight of that aspect of it.  Revelation, then, is culturally embedded, and multiple modern prophets have recognized that fact.

It is hardly surprising that we should find differences in expression or differences in practice or understanding at other times and other cultures, such as our own. This is not to give free reign to relativism, or undermine scriptural authority, or propose that there are no absolutes. But we must understand that scripture is an artifact of the past and reflects in many ways the time period it came from. God expects us to read and evaluate it, to take its truths as well as learn from its mistakes, to take its multivocality and make judgments in application. (See my story teaching this at BYU.) This is much more difficult than the monolithic model, but is also much more faithful to scripture as we have received it.

Several things have happened recently that dovetail with this understanding, but these events have made clear that monolithic assumptions about scripture spill over into modern scripture and modern Church authorities. Without passing judgment on either the content of the talks or the people making this claim, many people felt a disconnect or disharmony between Elder Uchtdorf’s recent General Conference talk and Elder Oaks’. Yet we sustain them both as prophets, seers, and revelators.  The idea was that they can’t both be right. Shouldn’t there be harmony? My thought was, it’s great to get some multivocality in conference! (The content of their talks is not the topic of the post, and I will liberally remove comments that veer in that direction.)

Or, take the recent “non-statement” on the priesthood ban (discussed here and here). If the various reasons offered for the ban were wrong, what about the mark of the curse in the Book of Mormon, with its implicit or explicit racial aspects? Should we get rid of those parts, or rewrite them? Or shouldn’t they, you know, not be there to begin with? Cause it’s scripture, and stuff, right? Well, no. In fact, the Book of Mormon would be a bit suspect if it lacked older views, and depicted some kind of modern utopia of racial/gender harmony.

This is about understanding what scripture is and how it should function. We can get real or apparent multivocality at the same time (Oaks vs. Uchtdorf, James vs. Paul, even Jesus vs. Jesus depending on which Gospel you’re reading ), multivocality at different times as God speaks to different needs and cultures, or multivocality due to the progressive Mormon doctrine of line-upon-line (e.g. “circumcision is an eternal covenant” vs. “circumcision is nothing.” “Be polygamous” vs. “stop being polygamous.” “Heaven and hell” vs. “three degrees of glory plus outer darkness plus maybe subdivisions of glory.”)

But let’s not flatten scripture and claim the same thing is or should always be taught on every topic in every passage! Nor should we think we must believe or do something simply because scripture says so! It may well depend on which scripture you’re looking at. Heaven-hell binary, or Three Degrees of Glory? Well, are you in the Book of Mormon or D&C? In one sense, scripture is a little like the Church Handbook of Instructions, except when an update goes out, no one replaces the old pages. The new and old are in there together.

Scripture, then, is not a simple rulebook or doctrinal encyclopedia that we simply consult to get Truth. Scripture is meant to challenge us to think and apply. So as we move on to reading the Old Testament, let’s get with Elder Widtsoe’s exhortation that “the scriptures must be read intelligently” and recalibrate our expectations.
Edit: I’ve written a bit on theological diversity before. Scroll down to the section called “Theological Diversity”

← Evangelicals Need Inoculation Too
Nominate the 2013 Mormon of the Year →

45 comments for “The Old Testament, Scripture, Apostles, the Priesthood Ban, and Theological Diversity: Calibrating Our Expectations”