In 2009 the “threefold mission” of the Church was extended to include a fourth point: “to care for the poor and needy.” Obviously practical charity is not a new concept for Mormonism. The very same chapter that included the famous “If any of you lack wisdom…” verse that led ultimately to the First Vision also contains this emphatic assertion:

Pure religion and undefiled before God and the Father is this, To visit the fatherless and widows in their affliction, and to keep himself unspotted from the world. (James 1:27)

This New Testament precedent was echoed in modern revelations. For example, Joseph Smith revealed the link between poverty and spiritual unity in the definition of Enoch’s Zion:

And the Lord called his people Zion, because they were of one heard and one mind, and dwelt in righteousness; and there was no poor among them. (Moses 7:18)

Next year came an even more stark revelation:

It is not given that one man should possess that which is above another, wherefore the world lieth in sin. (D&C 49:20)

Clearly, Mormon doctrine has had an economic aspect from the very beginning. And of course it wasn’t just a matter of doctrine. The focus on economic welfare was maintained out of necessity throughout the Church’s early history. Persecution and the hardships of frontier life and intercontinental immigration ensured that temporal needs were always in focus. What’s more, this focus has not been lost in modern times. The Church’s welfare program continues to be central to the institution and our perception of it, and modern programs like the Perpetual Education Fund (initiated in 2001) obviously were not being held back by the lack of formal emphasis on economic concerns prior to the 2009 change.

This raises two related questions. First: why wasn’t the temporal aspect included in the original threefold mission revealed in 1981? Second: why was it added in 2009? 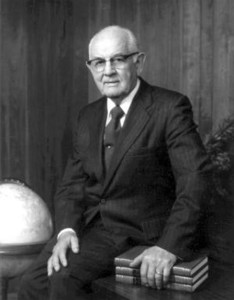 Part of the answer is revealed in a talk President Kimball gave in 1978 (three years prior to the unveiling of the threefold mission) called Becoming the Pure in Heart. In it, Kimball followed the Mormon pattern and paired a discussion of the “building of Zion through sacrifice and consecration” with a discussion of Church and state welfare programs. While emphasizing the importance of practical charity, he also espoused a deep distrust of centralized, government-run programs. He argued that government programs are prone to handouts (which are spiritually corrosive to the recipients) and also that their impersonal, bureaucratic nature can crowd out individual participation (which is spiritually corrosive to the donors).

Kimball’s talk presumed that the only redress to poverty is the re-allocation of physical wealth. This re-allocation can be private and voluntary (good) or it can be public and coercive (bad). Given only those two options, it’s no wonder that when Kimball subsequently unveiled the missions of the Church, poverty-relief was not among them. Within the paradigm in which all public policy efforts were suspected of being dangerous spiritual counterfeits, there was nothing further to consider beyond the welfare programs already in place (or subsequent offshoots to them, like the modern PEF).

But what if there is an alternative? What if there’s another view of poverty—what causes it and how it can be alleviated—that steps outside the dichotomy of private donations vs. public bureaucracy?

There is, but it’s not an alternative that would have been obvious in the 1970s and 1980s when the world was still dominated by the Cold War. At that time, ideology seemed starkly divided between capitalism and communism. We now know, however, that communism was never a viable economic policy. Although China and Cuba continue to pay lip service to the rhetoric of the revolution, both have learned that economic liberalization is the essential key to survival. North Korea alone remains a staunch adherent of the ideals of communism and a tragic but convenient reminder lest we forget.

We can now see that it is capitalism and only capitalism that has ever succeeded in lifting large populations out of absolute poverty, raising standards of living, creating a prosperous middle class, and so forth. This is not seriously debated among economists, but just as an illustration here are key findings from The Rational Optimist:

These are the fruits of the globalization of markets and widespread capitalism in the post-Cold War reality.

Even the apparently pitched political battles between European and American models, or between the American left and right, are first and foremost about the key question of how to make the free market work. No one—or at least no one who is taken seriously and understands basic economic realities—questions that any kind of a welfare state must be first built upon a thriving and prosperous market-based economy.

One of the key insights that follows from all this is that long-run poverty is not essentially about material wealth. When we look at poverty on the global scale, we understand that the lack of material wealth in the developing world is a symptom of deeper of dysfunctions. Just as one example, Hernando de Soto Polar—a Peruvian economist and long-time critic of the Shining Path Maoist terrorists—described the vital importance of the complex but subtle regulatory infrastructure that is present in capitalist nations but non-existent in much of the developing world. We take it for granted that such questions as “Who owns this house?” can be fairly and unambiguously determined in the United States, but ownership of property (and especially valuable, productive property like land) is subject to corruption, nepotism, and ambiguity in much of the developing world. As a result, de Soto Polar writes “An elite minority enjoys the economic benefits of the law and globalization, while the majority of entrepreneurs are stuck in poverty, where their assets –adding up to more than US$ 10 trillion worldwide– languish as dead capital in the shadows of the law.”

De Soto Polar’s recipe for reducing poverty is simple: enact legal reforms so that everyone—and not just the powerful—have access to the market. If you want less poverty, you need more capitalism.

That’s easier said than done, of course, but the important implication of this example is simply this: there are policies and programs that can work effective to combat poverty and stimulate economic growth other than the generally pointless shuffling around of material wealth that treats only the superficial symptoms of poverty.

We have a deeper and more profound understanding of the kinds of dysfunctions that lead to poverty, and how they can be addressed. Economists like Amartya Sen have challenged our emphasis on wealth comparison with illustrations about equality of opportunity, and popular writers like David Brooks have expounded the social aspects of poverty within the United States in works like The Social Animal.

So, the most important thing we knew in 2009 that we didn’t know in 1981 was that there are a whole range of policies and laws and regulations that can work to reduce poverty other than by coercive and centralized wealth redistribution. Speaking generally: We learned this largely because the collapse of capitalism’s only serious rival redirected our attention to the question of how to make capitalism work. Speaking specifically of the Church: the lesson probably came after the Perpetual Education Fund became just one example of a specific poverty-fighting program that eschewed wealth redistribution and focused on an underlying cause of poverty (lack of access to education) instead.

With this new understanding, it made all the sense in the world to formally add poverty as a central concern of the mission of the Church. It’s not that the issue is more important in 2009 than it was in 1981. It’s that we now have a new vision for actions which can be taken to address the concern. Of course, I haven’t said what exact policies we should be interested in pursuing beyond the bare minimum of including free markets as a necessary ingredient. I have also focused deliberately on the long-run aspects of poverty as opposed to short-run questions such as disaster relief. It’s a complex topic, and one that I look forward to treating in greater detail with Walker Wright (whom I’ve previously introduced) in the near future.

52 comments for “The Fourth Point: Caring for the Poor and Needy”