The District of Utah has had a busy week. As I’m sure you heard (and if you haven’t, you ought to read Kaimi’s post first), Utah’s ban on same-sex marriage has been struck down as unconstitutional. A week ago, in the wake of the decision that didn’t actually legalize polygamy, I looked at the potential tax consequences of that decision and, fairly anti-climatically, determined that there were none. Plenty of electrons will be spilled going over this decision but, again, I suspect that the tax consequences will be underexplored. And (spoiler alert!) this time, there are (fairly consequential) tax consequences to those who have married and to those who plan on marrying.[fn1] And what are they? Let’s explore in a Q&A format![fn2]

So what are the tax consequences of same-sex marriage in Utah?

Okay, how about this: what happens, for federal tax purposes, when a same-sex couple gets married?

Much better. Prior to this summer, nothing. DOMA prevented the federal government from recognizing same-sex marriages for any federal purpose. Then, this summer, the Supreme Court decided Windsor, which held that section 3 of DOMA (the section that prevented the federal government from recognizing state-sanctioned same-sex marriage) was unconstitutional. Today, then, if you’re married for state purposes, you’re married for federal purposes.

Which means that those individuals who got married yesterday will have to file their federal tax returns either as married filing jointly or married filing separately.

Wait, but what about the fact that the marriage is only happening in late December?

So how do I pick between filing jointly or separately?

For tax purposes, am I better of marrying or staying single?

First: I suspect that very few people choose between marrying on living together unmarried solely (or even largely) for tax purposes. But getting married affects the total amount of taxes two people pay; in some circumstances, it increases those taxes, while in others it decreases them.

That seems kind of weird. Can you illustrate it for me?

I see what you’re doing.

What? Alphabetizing their names?

So, for 2013, here are the tax brackets for married filing jointly and unmarried individuals: 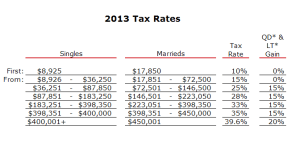 Okay, but all of this also applies to opposite-sex couples who get married.

Right, and I get that it’s new for the people of Utah, but are there any same-sex-marriage-specific tax consequences?

A couple. First, there’s the issue of what happens if Adam and Ben get married in Utah in 2013 and then, in 2014, move to Idaho, which doesn’t recognize same-sex marriage. In determining whether they’re married for federal income tax purposes, do Adam and Ben have to look to the state of ceremony or the state of domicile?[fn4]

The I.R.S. decided to look to the state of ceremony.[*] That is, Adam and Ben will not effectively become unmarried for federal income tax purposes by virtue of moving to a state that doesn’t recognize their marriage.

But what if they do become unmarried? Utah’s Acting Attorney General is asking the court for a stay of its decision, noting that, if the 10th Circuit overrules the district court, “the licenses issued [to same-sex couples] and the [same-sex] marriages performed in the absence of a stay may be void.”

While I’m dubious that a reversal of the decision would void marriages that had already been performed, let’s assume that the 10th Circuit does reverse and that it voids the same-sex marriages performed yesterday. What, then, are the tax consequences to those individuals?

I don’t know. The I.R.S. didn’t anticipate the question when it decided how to apply Windsor. I guess that, if the 10th Circuit were to say that the marriages had never happened, and were void ab initio, there would technically be no state of ceremony on which to base joint filing.

Such a final decision, though, will probably not happen in 2013 (or, probably, before the 2013 tax filing season, which begins on January 31, 2014). Which means that a same-sex couple that got married yesterday will probably have to file their 2013 returns as married. If the court of appeals voids their marriage, query whether the I.R.S. will (a) require them to file separately going forward, and (b) will require them to file an amended return for 2013.

[fn1] Note that most of these consequences also apply to opposite-sex marriages. So you can treat this as a primer on the tax consequences of marriage, period.

[fn2] Caveat: this is purely informational, btw, not legal advice. I don’t know if any non-wealthy person in the history of ever has sought tax advice in advance of marriage but, if you’re thinking about getting married and want to know the specific tax consequences to you, I strongly urge you to seek advice from a competent tax advisor.

[fn3] Assume that all of the money is taxable income, rather than gross or adjusted gross income. Basically, that means assume that there are no remaining deductions that they can take. That just makes doing the math simpler.

[*] In an earlier version, I accidentally typed “state of residence.” I’ve corrected the text.