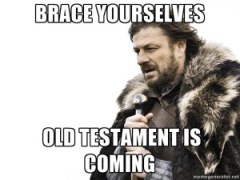 December has finally arrived! For the last six months, I’ve felt like Old Testament is just around the corner. Finally we’re into the last loose stretch of D&C and I can put up the first Old Testament post. With the cyclic return to the Old Testament comes the perennial question, how do I make sense of this? Where should I turn to read “out of  the best books”? Look no further, friend, for here is a scattered list. (I’ve been even busier than anticipated, and just don’t have time to polish or add images.)

First, though, a note. All the books below can be divided into two structural categories. There are those arranged by book, chapter, and verse, and those that are not. The first category includes commentaries, introductions, guides, histories (generally), and Study Bibles. These are the easiest books to use because you simply read them along with our schedule, or go directly to the chapter/verse you need help with. Having information so focused has a downside, namely, that it tends to be narrow.

The second category of books includes dictionaries, encyclopedias, maps, general books, monographs, journals, and most reference materials.  Building a broad knowledge of the history, culture, and thought of the Israelites and their neighbors takes time, study, and reading, mostly of this second kind of book. Even though category II books often contain scriptural indexes, these are usually to verses cited in that volume, not all the verses they are applicable to.  In other words, some of the most useful and broad knowledge may not have an immediate interpretive payoff.

I understand time is limited, so I’ve tried to categorize and prioritize this list to be as useful as possible. Let’s “make use of the means the Lord has provided” and get studying! (Alma 60:21)

First, and I cannot stress this enough, if there is only one thing you can do, read a second Bible translation. It will make a huge difference. (If that’s a problem for you, read this.) I should note that the increased clarity of a newer translation does not decrease the foreignness or strangeness of the Old Testament, just as, say, speaking Japanese fluently would not make you culturally fluent or comfortable. But there are great reasons for reading different, newer translations. I often deal with translation questions at my Old Testament Gospel Doctrine blog.

Picking one is potentially very difficult, so I’ll jump right to recommendations without justification.

Second, if you can only get two books and feel like a total Old Testament beginner, then get a Bible and Jehovah and the World of the Old Testament, a good general introduction with lots of illustrations and pictures from Deseret Book. I reviewed it very positively here.  (If you have some general familiarity with Old Testament studies, skip JaWOT and get one of the academic intros below.)

The Short List
This is a list of general books that I wish every LDS would read to get some basic background,  wrap their minds around the Israelite mindset, and how it differs so much from the modern world and Mormonism, and avoid so many problems we create for ourselves by approaching it from the wrong assumptions.
Academic introductions, that would be used in a university intro course
These cover every book, talking about their background, authorship, history, and interpretation.

Who wrote the Bible?

Lots of this information is found in some of the other books here, but this deserved its own category.

General/reference/commentary
For Bible dictionary, I really like the multivolume IVP Dictionaries- Dictionary of the Old Testament: Pentateuch, Historical Books, Prophets, Wisdom & Poetry. See this and my other recommendations here.
Specific uncategorized.
Get to know the Bible, its nature and background, and LDS usages  of it.
The JST (since we’re talking about the Bible…)

Where to get these?

Amazon, Abe.com (used), cbd.com often has good prices, and the FAIR bookstore carries many of them as well, if you’d like to support them.

I have more pre-Gospel Doctrine posts under way, but finals are weighing heavy.