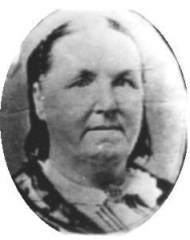 The author of this poem may be Eliza Dorsey Ashworth, but it is hard to know for sure since I haven’t found any indication that Dorsey Ashworth wrote poetry.  Born in 1821, she married Benjamin Ashworth and they both joined the Church in England sometime prior to emigrating to the U.S. Benjamin traveled first in 1849, stopping in St. Louis to earn money. Eliza followed with their children in 1850. The couple remained there until 1854, burying three of their children while there, as well as welcoming two more to the family there and another en route to Utah. The family settled near Millcreek in the Salt Lake Valley, where the canyon stream claimed two more of her children. Eliza died in 1887.

Here’s in memory of Joseph,

Our prophet and our seer,

Our Patriarch most dear;

That’s with the priesthood cloth’d,

To bring about a mighty work,

The mighty work of God.

A champion bold was Joseph,

He prov’d himself the man

To bring about the plan,

The fullness of the Gentiles,

The gathering of the Jews,

And through him every nation

Shall hear the glorious truths.

But now our prophet’s martyr’d,

The mobbers shed his blood,

With all the men of God,

The hireling priests’ began to rage,

When Joseph was so bold,

As to declare the rightful heir

And prophet of the Lord.

We’ll have no prophets now they cry

In this enlightened age,

They are no longer needed,

They are all done away;

Believe, and you’ll be saved

For Jesus is the way,

But ne’er do what He says.

Joseph no hireling would be,

But prov’d a shepherd bold,

He never would forsake his flock,

For honour, fear, or gold.

He was a noble-hearted man,

Of noble seed and birth,

And bold he stood for Zion’s cause

While he remained on earth.

Although he’s gone, in mem’ry still

We will our prophet hold,

Who was so great and bold:

O yes, his name shall be renowned

In ages yet to come,

And by the Lord he will be own’d

As his eternal son.

In terms of character, I find it interesting the differences in the character traits that this poem emphasizes and what Lorenzo Snow emphasizes. Ashworth sees Joseph Smith as “noble-hearted” and as a “champion bold” who has “prov’d himself” and who “never would forsake his flock / For honour, fear or gold.” In contrast, Snow sees a “pure, sincere, honest” man of “high moral character.” He  is “free from hypocrisy” and welcome’s “innocent amusement” while teaching “with the power of God.”

While there is certainly no problem in reconciling these two views, I wonder if they don’t also reflect the needs of their writers. Ashworth and the saints of her day needed an example of the bravery necessary to cross the plains and deal with the still hostile views of others in the U.S., to say nothing of what remained unknown in their future home. Snow, representing a people past the need for the rigors of oxen and wind-driven travel and newly reconciled to the U.S. government, if not their neighbors, needed a Joseph Smith who would help Mormons maintain their ethics and beliefs while living in the world.

All this makes me wonder: what image of Joseph Smith do we need today?

← Literary DCGD #46: Zion
The Fourth Point: Caring for the Poor and Needy →