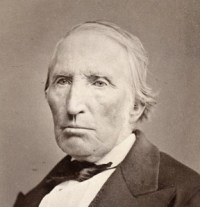 Perhaps the most difficult issue in discussing the idea of Zion is defining exactly what we mean. Even though D&C Gospel Doctrine lesson #46 is titled “Zion—The Pure in Heart,” its first section is titled “The word Zion has several meanings” and lists no less than six. Of these, I’ve seen evidence in Mormon poetry for two or three definitions. First, the early Mormon poets used Zion in a millennial sense, to mean “The New Jerusalem.” They also used ion to mean “The dwelling place of those who are exalted,” or perhaps even simply “Those who are exalted.” And, from the poetry I’ve read, it seems that Zion was also used to mean “The Church and its stakes” and “The members of the Church.” In the following poem John Lyon seems to use all three.

Lyon was probably the second best known Mormon poet (at least among those known for poetry) behind Eliza R. Snow. His poetry is often lighter and more approachable, covering subjects like currency and the death of a canary. Born in 1803, Lyon was largely self-taught, only learning to read at the age of 25. But he nevertheless soon becoming an active literary participant, working for seven different newspapers in his native Scotland and assisting in the production of several anthologies of the work of other poets. He joined the LDS Church in 1844 and published his first LDS poem, “Man,” in the Millennial Star in 1845. By 1849, British Mission President Orson Spencer lauded his work as “genius” and as providing “unmistakable melody and power.” Lyon served an LDS mission in England, published a volume of poems, The Harp of Zion

, and then immigrated to Utah, where he was made a patriarch in 1872. His Utah poems were published posthumously in the volume Songs of a Pioneer (1923).

Prepare, prepare ye saints of the Most High,

Behold the bridegroom standeth at the door;

The signs declared, announce his coming nigh,

When grief and pain shall vex your souls no more.

Shall bless the sunshine of a thousand years,

Where friendship ne’er betrays the love it bore,

Nor dims faith’s tranquil face with brim-ful tears,
Nor clouds its hop’d-for prospects, with alarming fears.

Beyond the cloud-capt mountains, far away,

The priesthood of God’s testimony’s borne

Where peaceful rest shall crown the sorrow-worn

With triple-portioned love for by-gone scorn.

Nursed by the care of heaven’s mighty power,

From east to west the glowing light shall soar,
Till dark chaotic night its brightness melts before.

From far the gathering tribes shall flocking come,

With everlasting songs of heav’nly glee.

On Zion’s Mount a father’s mind will see

His offspring’s seed, and claim them for his own;

Restored by gospel light, before unknown
To this dark world, where sin’s vast ruin reign’d alone.

The joint-stock riches of a hundred isles,

And equal-balanc’d justice bless the land,

And joyful ease emparadise the toils,

Of woe-worn pilgrims in the trying day,

The marriage day of heav’nly nuptials near,

When the fair bride and festive banquet song.

Shall crown the triumphs of a higher sphere,

Around the throne, in homage deep revere

The mighty God, who thus salvation brings,
And all confess him Lord o’er all created things.

Lyon starts with a millenniarian view of Zion, and in the second stanza, after a reference to Addison Pratt’s mission to the South Pacific, seems to move to the Church:

Nursed by the care of heaven’s mighty power,

Lyon also brings in the LDS doctrine of the gathering, suggesting that through the gathering Zion will be created. In a similar vein, Lyon also references the ill-fated “joint-stock” program promoted by Church leaders in England, which failed in a scandal a few months after this poem was published. Lyon then finishes with Zion as the dwelling place and people who obtain exaltation after this life.

Lyon hasn’t really helped much in defining what Zion means. , but I think he has given us a bit to think about, and perhaps even expanded what elements we might include in our thought about Zion.