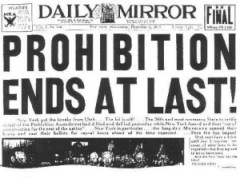 The Twitters tell me that 80 years ago today, Utah became the 36th state to ratify the 21st Amendment, thus ending Prohibition.

Whatever you think about Prohibition, it’s probably worth noting the Pres. Grant was not a fan of its end. In fact, he addressed the end of Prohibition—and Utah’s role in ending it—at General Conference in 1934. Here’s an (annotated by me) excerpt of what he said:[fn1]

Never in the history of this Church have we needed so much as we do today the Word of Wisdom. No nation can ever prosper, this nation being no exception, that undertakes to pay part of its obligation and to build up the nation by licensing the sale of liquor[fn2] and allowing people to make millions upon millions of dollars by selling liquor. I have never felt so humiliated in my life over anything as that the state of Utah voted for the repeal of prohibition. I do not want to interfere with any man’s rights or privileges. I do not want to dictate to any man. But when the Lord gives a revelation and tells me what is for my financial benefit and the financial benefit of this people, because “of evils and designs which do and will exist in the hearts of conspiring men in the last days,” I do think that at least the Latter-day Saints should listen to what the Lord has said.

Can there be any meaner or more devilish thing than the advertisement showing cigaret [sic] smoke as an engagement ring? That is the kind of advertising cigarets are getting.[fn3]

I could not help but feel humiliated when the Latter-day Saints knew as well as they knew that they lived that I wanted them to remain true to the Word of Wisdom and not vote for the repeal of prohibition.

There’s a little more, then Pres. Grant ends with this:

Now, I see there is no time left, so I will ask you, one and all, as a favor, every Latter-day Saint within the sound of my voice, to read the Word of Wisdom as contained in the Doctrine and Covenants, and do it tonight or tomorrow. Do not put it off longer than tomorrow, and it will save my reading it and saying any more about it now.

While we’re thinking about Pres. Grant and Prohibition, it’s probably a good time to flag this BYU Studies article, which discusses his early beer-drinking, his struggle with conscience, and his ultimate embrace of a beer-free life.[fn4]

[fn2] Hallelujah! An in to talk about tax: prior to Prohibition, 30-40 percent of federal revenue came from alcohol excise taxes. In fact, one of the factions that pushed for the 16th Amendment and a federal income tax was prohibitionists, figuring that it would be more feasible to ban alcohol if they could somehow replace the revenue. See Daniel Okrent, Last Call: The Rise and Fall of Prohibition 53-58 (2010).