The weather comes and goes, the climate stays. At least, that is what we were taught in our youth, but nowadays the stability of climate is in heavy weather, for the climate is changing. In windy and rainy Holland the weather is an obvious conversation starter; a Nepalese anthropologist who did his fieldwork in the Netherlands in the ‘80s was struck by our constant speaking about the obvious, the weather; he thought the reason was that everything else in this country was under control, man-made or well-regulated, so the weather was about the only variable item we could mention This discourse, by now, is supplemented by one on climate change, as today any mention of the weather is almost routinely accompanied by a referral to the threat-from-outside, the warming of the earth, the rise of the sea level, the more erratic weather. 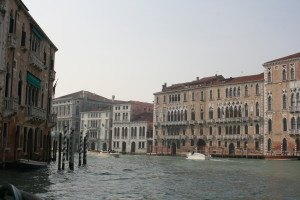 Not only Holland is threatened by rising water, also the most beautiful city in the world is, Venice

The Netherlands have incorporated the notion of climate change lock, stock and barrel, as have most European countries, also those much higher above sea level, such as Norway. Climate change has grown into a political as well as popular discourse in a decade, very rapidly. In the US things are different, and also in Deseret climate change never became popular. Why the difference? Why is climate change so ‘alien’ in Deseret, and comes it so ‘natural’ in most of Europe? I am speaking here not about scientific dissenters or skeptics, but about the popular acceptation of the new discourse on the climate change.

I think that it has to do with secularization and the definition of self. The first question has to be why people see climate change predominantly as a threat. People identify with the climate they live in. A Dutch expression runs: ‘We are not of sugar”, meaning we can stand the rain, the wind and the cold of our climate, we can take it. This holds for most cultures in the world, as anthropologists have noted the world over. Australian Aborigines love their dusty desert, just as the people of Deseret have a high affection for their high and quite dry valley. The Dutch crave for their wet, rainy country, just as the Papua’s of South East New Guinea feel displaced outside their mosquito ridden swamps. Much as we may like to complain about the weather, we identify with our climate.

This means that climate change – whatever its effects on the earth as such – effects our definition of self. Precisely how it informs our identity depends on the way a culture sees its relationship with the climate, and here several different discourses are possible. I work in Africa, and African cultures have a special approach to weather and climate. Rain is the fascination of Africa: rituals to procure rain – I did several myself in Cameroon – vary from a ritual hunt, a sacrifice, to a mask dance and a public prayer. In all these instances rain making has to do with power between humans. Only powerful people can ‘make rain’. Rain makers are either local kings, people of renown, or those with special relations with the ancestors, spirits or gods. When Nelson Mandela, easily the most charismatic of today’s political figures, took power, he first consulted the Lovedu Rain Queen, the major rain maker of Southern Africa, and at the end of his second term he did the same. Speaking about the climate in Africa, means speaking about people and their relations, here and now. Climate change then co-varies with disruptions in human power relations. 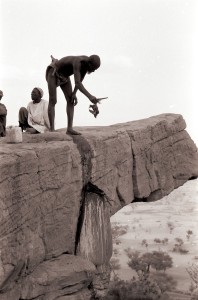 A Dogon priest in Mali performing a sacrifice to procure rain

Climate change can be built into a world view, as in the case of Meso-America. The Aztec language did not distinguish weather and climate, both called cahuitl, but their climate discourse was shot through with a violent and pessimistic streak. The focus was on rain, but then on storms, lightning and destruction, with whirlwinds as dangerous personages. Aztec sacred history knew five major era’s, each of which characterized by a new sun, and by their own climatic risk: drought, flooding, storms and volcanic winters. Only complicated rituals, aimed at placating these climatic dangers and rejuvenating the sun could postpone the inevitable catastrophe. In the local cultures of their present-day inheritors, like Mixtec, Guarani, Mbya and Warao this is still recognizable. The same holds for Maya culture, by the way, and we did manage to survive their end time prediction of 21-12-2012. 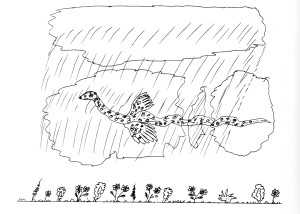 The third climate discourse is the one we inherited in the restored gospel, the one of classic Israel. Here the notion of covenant is central, and the stability of the climate – which is considered a blessing – depends on the faithfulness of Yahweh’s people to terms of the covenant with their Lord. We as LDS have fundamentally a covenant theology, in which our agency is both a blessing and an assignment, encapsulated in the notion of ‘stewardship’, and we fit well into this old Israeli pattern. We do not own the earth, we are its caretakers, but we are the rightful caretakers: while there is no spare earth, neither are there stand-in stewards. The Dutch have a maritime expression for this, stemming from the Calvinist tradition that has indirectly informed Mormonism: we are ‘Schippers naast God’: captains of the ship together with God.

Power, end of the world and covenant with the Lord, the climate is a powerful symbol with many meanings, and these three are relevant for my argument. Our Western discourse on climate change for a large part is about power, the differences in power between the rich and the poor countries, between the large multinationals and local producers, between the North and the South. The major climate conferences, like Rio and Kyoto, were arena’s, not puzzle solving explorations. That is one reason for reticence of the powers-that-be, the discourse of climate change can be seen as a ‘weapon of the weak’.

Then the end of time. One major difference between the USA and Europe is in the field of religion. Europe, the first child of Christianity, in general has chosen to leave its religious roots. Secularization, as a two-pronged process of both loss of power for religious institutions and of people leaving their churches, has progressed unevenly in various European countries, but on the whole much further than in the USA. Christianity lost most of its power in Europe in the 20th century, sometimes even quicker. The Netherlands in the last 50 years moved from an intensely religious society to a very secular one. This changed the cultural view of the future, losing the traditional Christian vision of the future.

My thesis is that in the Netherlands, as one European country, the climate discourse exactly fitted into the cognitive slot left by the demise of Christian end time expectations. The discourse had an immediate appeal because it provided a gloomy long term future by fully secular mechanisms. Climate being a major cultural focus of identity in any country, change in climate threatens the self-definition of the nation, particularly in the Netherlands because this one zoomed in on the major threats from the Dutch past, rising waters against a sinking land. ‘Where the broad ocean leans against the land’ the poet Keats mused about Holland, the country that built itself from the very same waters. Also, that same ocean restricts the country to a very limited territory, densely populated, and evidently dependent upon the wider region, politically and economically. Poignant detail is that this threat is partly of our own making. The notion of guilt, ensconced in Calvinist theology, here found a new outlet: ‘We are ourselves to blame by our consumerist lifestyle and overgrown ecological footprint.’ This ecological ‘original sin’ however can be remedied in a similar fashion, by working hard at ‘ecological conversion’, reducing our impact on Gaia. As ‘Captains with God’ we can take matters into our own hands, collectively, and relying on the ‘forgiveness’ of nature, i.e. the resilience of our planetary system postpone or even avert the end. Thus, in the Netherlands climate discourse functions as a secular end time expectation.

In the USA the climate discourse never had such an immediate cultural appeal. Of course, the USA is in a position of political and economic strength, for which any change will be a threat, its huge territory suggesting an autonomy of existence; Deseret culture has this notion in optima forma. But the religious factor, in my view, is decisive. Ironically, whereas the USA as defined by the Constitution was founded as a secular state, it never formed a secular society; it started out as a refuge from state religion, and then developed into an open religious market, with denominations retaining a strong position in social life. USA culture is not secular, at least nowhere near as secular as Europe. In the USA the Christian end time discourse has not yet lost much of its strength; during US history several waves of revitalization have kept the apocalyptic vision very much alive. Mormonism has been part and parcel of this dynamic. The future is already known. One important consequence is that this projected future remains rather short, as the Parousia, Second Coming or Rapture can hit us any moment. Even if this expectation is continuously postponed, the time frame leaves little cognitive space for a dramatic scenario that is so far into the future as climate changes need. In such a non-secular environment the climate discourse easily can be read as a denial of the foundational principles of US culture and society, threatening to upstage Christian end time expectations. Thus, in the USA the cognitive slot for an end time prediction was not empty at all; climate change did not ‘fit’. 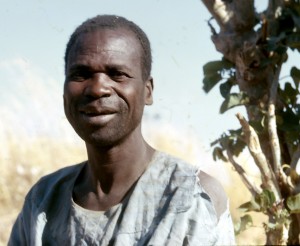 An African rain maker, from Cameroon

Given this lack of cultural fit, I come back to the question what do the Twelve think of climate change, what conclusions could we draw? The answer that they had no opinion on the matter to some extent came as a surprise for me. First, the pleasant surprise was that they took the questions seriously enough to answer and even to respond rather quickly, and that is – I think – a step forward. Second, the absence of denial or skepticism is striking, for in Deseret the issue is clearly not popular, and surely not on everyone’s mind. Actually I had expected an answer with a mix of doubt and concern, doubt about the consensus on scientific findings and concern about the climate. But even that was absent. This statement on climate change, though not very daring, might be rather wise, one step ahead from denial or skepticism, leaving open eventual later expressions of concern for our proper stewardship of the earth, for which LDS theology in fact has the tools.

In the end, this blog treats the cultural variables of acceptance of the climate discourse. It leaves intact the concern for our planet that I expressed in the first blog. Climate change is real, and its consequences potentially very harmful. Maybe our climate could be improved – especially in the Netherlands! – but how can we be sure that we will just warm a few grades, have just a bit more rain, or seek shelter for just some more tornadoes, and nothing more? We are tinkering with a system that we are just beginning to understand, the very one that forms the very basis of our existence. But knowing what dynamics impinge on acceptance of that message is important, I think.

33 comments for “Why is climate change not popular in Deseret?”