(This post is the second in a series on Ender’s Game. Read the first here.) 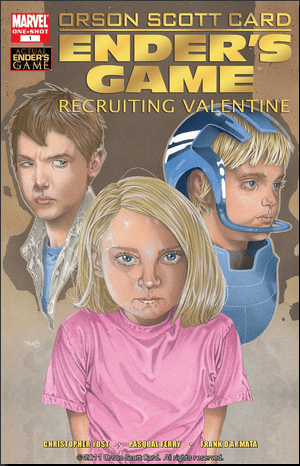 Peter, Ender, and Valentine Wiggin as depicted in the Marvel comics.

Andrew “Ender” Wiggin is a Third. This means that he is the third child in a family which–in the strictly population controlled United States described in Ender’s Game violates both the law and social taboo. Ender’s oldest sibling is Peter, a sociopathic genius who takes to torturing small animals when his favorite target, Ender, is shipped to Battle School. Peter himself was rejected because the military concluded he “had the soul of a jackal.” After Peter, his parents had Valentine. Although just as intelligent as Peter, she was also rejected from the Battle School because “she was too pacific, too conciliatory, and above all too empathic.” And so Ender’s parents were granted a rare exception to the two-children policy and Ender was born.

There’s no doubt from the earliest pages that Peter is an evil character. His maliciousness comes across not just in his physical abuse of his younger brother, but in the mind games he plays with Ender and Valentine. When Valentine stops him from attacking, and possibly killing, Ender early in the book, Peter promises to kill Ender at a future time, saying:

There’ll come a day when you aren’t there with him, when you forget. And suddenly you’ll remember, and you’ll rush to him, and there he’ll be, perfectly all right. And the next time you won’t worry so much, and you won’t come as fast. And every time, he’ll be all right. And you’ll think that I forgot. Even though you’ll remember that I said this, you’ll think that I forgot. And years will pass. And then there’ll be a terrible accident, and I’ll find his body, and I’ll cry and cry over him, and you’ll remember this conversation, Vally, but you’ll be ashamed of yourself for remembering, because you’ll know that I changed, that it really was an accident, that it’s cruel of you even to remember what I said in a childhood quarrel. Except that it’ll be true.

Ender is only six year old at the time. Later on the same evening–the very next page of the book–Peter sneaks into Ender’s room while he believes Ender is asleep. Ender, doesn’t move, terrified that his brother is going to try and smother him with a pillow. Instead, however, Peter crouches over Ender and says simply, “Ender, I’m sorry, I’m sorry, I know how it feels, I’m sorry, I’m your brother, I love you.”

Peter is almost an exorbitantly evil character relative to his role in the novel. After the first twenty pages or so, he never interacts with Ender directly again. He’s not a simplistic caricature of evil, either. While Ender saves humanity from the alien menace, Peter sets himself up as the ultimate political leader of all humanity–the first Hegemon–and in the process averts world war and unifies humanity into an era of peace that lasts for thousands of years. Ender, the heroic protagonist, murders two fellow children with his bare hands and kills billions and billions in a genocidal war. Peter, the evil psychopath, creates peace and saves humanity without directly killing anyone.

The ambiguity surrounding Peter parallels the ambiguity with which Mormons view Lucifer. After all, Mormon theology includes most of the same pieces as traditional Christian doctrine, but in sometimes radically different context. The biggest discrepancy is the Fall. In traditional Christianity the Fall can be seen as fortunate only insofar as it provides an opportunity for God to demonstrate His love and power. Furthermore, the traditional reading is that Lucifer’s pride caused him to be cast down from Heaven, and that this served as the template for the Great Chain of Being. According to this idea, all creation is placed in a static hierarchy with God at the top, angels below that, men even farther down, and then animals below men. The ultimate sin was to imitate Lucifer and seek to break out of the chain, as Faust does in the original legend and is therefore dragged down to Hell. In Goethe’s version of Faust, however, he is ultimately saved because his desire to constantly strive for something higher is in some sense redemptive. This is an example of the Romantic rejection of the Great Chain of Being, and it’s in much the same view that Mormonism holds that it is not the gravest sin but the highest virtue to strive to imitate and emulate God.

So Mormons, while accepting the scriptural description of the Fall in Genesis, have a radically different view of what that Fall means. Along with that comes a different perspective on Lucifer. If the Fall actually paves the way for eventually becoming more like God–and thus fulfilling our nature–then is there a sense in which Lucifer’s role is ultimately necessary? Perhaps even beneficial? After all, “there must be opposition in all things.” In addition to this ambiguity, Mormon doctrine also holds that Lucifer was part of the grand, pre-mortal family with the rest of the human race just as Peter and Ender were brother and sister before Ender was taken to Battle School.

Rather than take a position on the theology of Lucifer’s role in Mormonism, however, my interest here is in the cultural implications. There is a hint of ambiguity to the view of Lucifer. There’s also an association of his primal sin not so much with pride as with agency. Lucifer’s alternative to the Plan of Salvation involved eliminating our status as independent moral agents. Both of these aspects–the ambiguity and the attack on agency–define Peter in Ender’s Game.

The ambiguity I’ve already hinted at, with him alternately trying to kill and then confessing his love for Ender along with his role as a savior of humanity almost as much as Ender was. In addition, there’s the fact that his influence on Ender is at least partially beneficial. As Ender spends his first night in the Battle School he is scared and alone, but doesn’t give into the tears that fill the room around him. He thinks to himself, “Thank you for this, Peter. For dry eyes and silent weeping. You taught me how to hide anything I felt. More than ever, I need that now.”

In addition, despite all that Peter has done, Ender never stops loving his brother. Towards the end of the book Ender visits earth briefly, and meets with his sister Valentine on a raft in the middle of a lake.

Peter also has some traditionally Satanic characteristics. Valentine describes his status as an accuser, when she describes how he would torment other children at school. “He never hit them, but he tortured them just the same. Found what they were most ashamed of and told it to the person whose respect they most wanted. Found what they most feared and made sure they faced it often.” He also became the ruler of the Earth. This is true in the literal sense, but there’s a deeper reality as well. Again, Valentine describes it:

“No, in those days you didn’t–undo what Peter did. You didn’t cross him. But Ender would be kind to squirrels. Do you understand? He’d feed them.”
“But if he fed them, they’d become tame, and that much easier for Peter to catch.”
Valentine began to cry again. “No matter what you do, it always helps Peter. Everything helps Peter, everything, you just can’t get away, no matter what.”

But the real defining characteristic comes from Peter himself, when he explains to Valentine: “I didn’t hate you. I loved you both, I just had to be–had to have control.” [emphasis original] 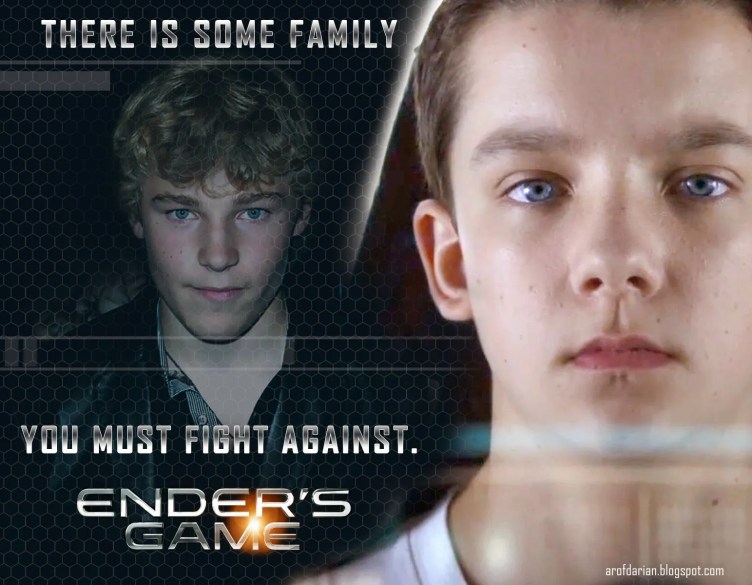 As I wrote in the first piece, Orson Scott Card did not set out to write a treatise on Mormon theology in Ender’s Game. The similarities between Peter Wiggin and the Mormon conception of Lucifer merely reflect Card’s Mormon upbringing. That unselfconsciousness is part of what makes the book so interesting for me, however. Intentional philosophizing within a work is often detrimental, but including these themes organically makes them much more successful both artistically and, as is science fiction’s greatest promise, as a means to thinking about these ideas in fresh and provocative ways. When I say that Ender’s Game is a distinctly Mormon book, my meaning is not that it accurately reflects true or settled Mormon doctrine, but rather that it is fruitfully preoccupied with the kinds of questions that arise in Mormonism and that Mormons tend to think about.

For that reason, I’ll probably return to Ender’s Game at least a couple more times before the movie is released in November.

← Sunday Afternoon Session
Why is climate change not popular in Deseret? →

4 comments for “Peter Wiggin as Lucifer”