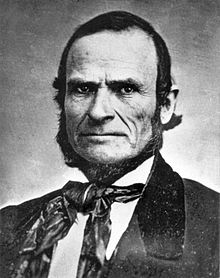 Temple and Family History work (discussed in Gospel Doctrine lesson #40) are perhaps the most unique of LDS doctrines. The doctrine behind them solves both the problem of making salvation universally available and the need for high-church ceremony in a religion that focuses on low-church ideals in its regular worship. The origin of this doctrine appeared in Mormonism in late 1840, and by the following year it was popular enough that it was the subject of the following poem.

Its author, Joel Hills Johnson, is perhaps best known today for the hymn High on the Mountain Top, which has appeared in LDS hymnals since 1863. Born in 1802 in Grafton, Massachusetts, Johnson joined the Church in 1831 in Amherst, Ohio. He served LDS missions to New York and to Ohio and Kentucky and participated in Zion’s Camp, although he stopped in Springfield, Illinois and never reached Missouri. He served as the President of the Ramus, Illinois stake starting in 1840. Johnson reached Utah in 1848, settling in the Mill Creek area for a few years. He then helped found Enoch, Utah in 1851 and helped settle southern Utah. He was among the most prolific of early Mormon poets, recording more than 700 poems in his journal. In addition to those found in various LDS periodicals, his poetry is found in two published collections, Voice from the Mountains (1881) and Hymns of praise for the young (1882). He died in 1883 in Kane County, Utah.

Baptism for the Dead

The glorious gospel light has shown

In this the latter day.

With such intelligence that none

From truth need turn away.

For ‘mong things which have been sealed,

And from the world kept hid;

The Lord has to his saints revealed,

As anciently he did.

And thro’ the priesthood now restored,

Has e’en prepared the way,

Through which the dead may hear his word,

And all its truths obey.

As Christ to spirits went to preach,

Who were in prison laid;

So many saints have gone to teach

The gospel to the dead.

And we for them can be baptized;

Yes, for our friends most dear!

That they can with the just be raised,

When Gabriel’s trump they hear.

That they may come with Christ again,

When he to earth descends;

A thousand years with him to reign,

And with their earthly friends.

That you can saviours be,

For all your dead who will obey

The gospel and be free.

Then let us rise without restraint,

And act for those we love;

For they are giving their consent,

And wait for us to move.

The understanding of the need for baptism for the dead, and for Temple work, is already here in this poem. Not only does Johnson cite 1 Corinthians 15:29 before the first stanza, he also alludes to Christ preaching to the spirits in prison (1 Peter 3:19-20) and to the idea that by doing so “you can saviours be.” And, Johnson claims that those who have passed on are already “giving their consent” to these baptisms.

It doesn’t seem to me like the concept has changed much since then.

← Everybody Ought to Have a Body
The Metaphysics of Sealing →

5 comments for “Literary DCGD #40: Baptism for the Dead”