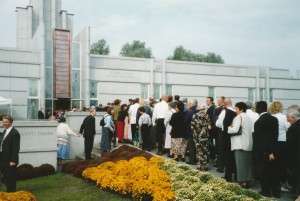 About a year ago I took the liberty of asking the Brethren what their opinion was on climate change. My reason was that we as Dutch have a temple below sea level, probably the only one in the world. How did the Brethren envisage the future of the Dutch temple, considering sea level rise due to perceived and expected climate change? As LDS temples are destined for eternity, what are the long-term perspectives of this particular House of the Lord? Is it going to be flooded when the waters rise, inundated when the ‘inconvenient truth’ hits Holland? We as Dutch Saints are concerned about “our” temple, as in the long run the slow sinking of the Netherlands and the rising sea levels due to climate change might well form a threat for us, and thus for our temple.

The Dutch and Belgians are quite climate conscious, and follow with great interest the global debates about climate change. Last week the new IPCC report on climate change came out and again we learned that climate change is real and that Homo sapiens is for a major part responsible for it. For those in the scientific community this is not very surprising, but the level of certainty has increased since the last report and the long term trends seem to be incontrovertible, despite short term seeming reversals. But especially the crucial role of human interference is spelled out clearer than before, though here the band-width of interpretation remains larger. Of course, there are still die-hard climate skeptics, but the ground under their feet is not getting more solid. In fact, their opposition and detailed critique on the former IPCC report has honed the analytical acumen of climate scientists. Science is debate, and through that debate in climate science the consensus has become clearer and more nuanced. This very week Mitt Romney raised global warming as a top issue; he believes global warming is occurring and is human-caused though he is not certain to what extent. That is, in fact, a very apt summing up of the scientific consensus: it is there and we are, somewhere, part of the picture.

The Brethren did take my question seriously and after a month I received a very polite answer, in a formally signed letter, stating that the Brethren had no opinion on the issue of climate change.

So, there we stand: ecclesiastically there is no official position of the Church on climate change. That should not be overly surprising, as the climate usually is not defined as a moral issue. But this depends on what one considers a moral issue; our church defines morals routinely in terms of sexuality, but our human interference with our planet in fact is quite moral – Romney is right in that. This moral aspect of the climate has been stipulated many times in the Scriptures. Some examples.

In the Old Testament the Lord battles with thunder and hail stones against Pharaoh (Ex. 9:33), or uses heavy weather to punish his covenant people (1 Sa 12:18). In the New Testament Jesus is lord of wind and water (Mt 26:8-10), his return is announced with lightning, hail, fire and blood (Mt 24:27, Rev. 8:7, 11:19, 16:21). Rain is often used as a sign of blessing (Deut. 32:2) – strange for the Dutch but understandable for Utahns. But more generally, the regular and stable rhythm of the seasons – the very thing we call climate – is portrayed as a symbol of the covenant with the Lord (Gen. 8:22). And nobody considers the Flood as ethically neutral.

In our restored gospel we have a wonderful expression of the ‘state of the earth’ in relation to iniquity, in one of the most beautiful apocalyptic passages in the Scriptures, Moses 7:48
48 And it came to pass that Enoch looked upon the earth; and he heard a voice from the bowels thereof, saying: Wo, wo is me, the mother of men; I am pained, I am weary, because of the wickedness of my children. When shall I rest, and be cleansed from the filthiness which is gone forth out of me? When will my Creator sanctify me, that I may rest, and righteousness for a season abide upon my face?

The earth pained by filthiness … that sounds exactly what we as human beings are inflicting upon Gaia by pollution and greenhouse emissions; ”wickedness” easily accrues sexual overtones in LDS discourse; however, I cannot imagine the Earth being overly concerned with the sins of our underbelly, though very much with chemical and nuclear waste disposal, and with the rapid depletion of resources, a combined wickedness that could well “pain” Earth. If we ruin our climate, we break an old covenant. Morality does include our handling of our planet, so when our leaders do not take a stand on this, this belongs to the individual agency of the Saints, to our stewardship. The days of the climate skeptics are over, also in the Church; we are – as Hugh Nibley often has pointed out – the stewards of our patches of the earth, our vineyards, our remains of paradise. Do we act as such? Do we even speak about it? 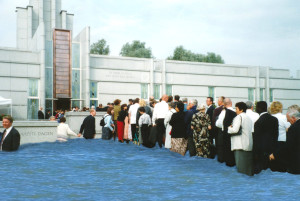 83 comments for “Climate and gospel”