As a friend of mine living in Germany informed me, Ender’s Game has already started to play in some markets, and the United States release is coming up this week. With that in mind, I thought I’d return to the novel once more.

In the days before The Hunger Games and Battle Royale made the idea of children murdering each other part of mainstream entertainment, the combination of very young characters and serious violence was one of the more provocative and controversial elements of Ender’s Game. Young Ender Wiggin is only six years old when he beats another child to death, and he subsequently kills another kid with his bare hands while in Battle School. Orson Scott Card described one reader who criticized the book for unrealistic depiction of children by noting that “it was important to her, and to others, to believe that children don’t actually think or speak the way the children in Ender’s Game think and speak.” He went on to write that the simplest explanation for why the children in the book don’t think and act the way (some) adults expect children to think and act is that they don’t think of themselves as children. As Card put it, “Never in my entire childhood did I feel like a child. I felt like a person all along.” 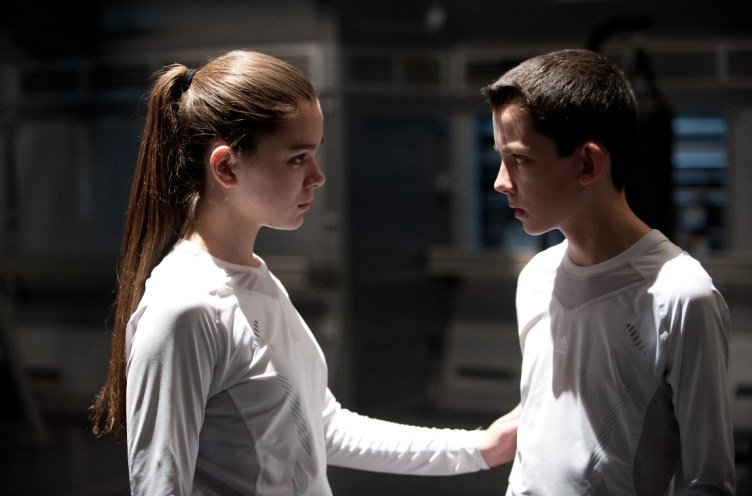 Hailee Steinfeld as Petra and Asa Butterfield as Ender from the film. They are only portrayed at their oldest ages from the book in the film, but in the text Ender is six years old when he arrives at Battle School in the book.

The concept of childhood is a common theme for the child soldiers in the book. One of Ender’s earliest friends at the Battle School, Dink, tells Ender “I’ve got a pretty good idea what children are, and we’re not children.” Dink then observes, “We never cry. We really are trying to be adults.”  But of course they are still children, even if they refer to themselves as “soldiers” or “launchies”. They are just children who are being denied the comfort and safety of a real childhood. As Graff makes clear: “Ender Wiggin must believe that no matter what happens, no adult will ever, ever step in to help him in any way.” Ender himself comes to embody that philosophy as well. His first thoughts of Bean, his youngest and smallest soldier, are that “He was a child. He was young.” But then Ender corrects himself:

No he isn’t, thought Ender. Small, yes. But Bean has been through a battle with a whole army depending on him and on the soldiers that he led, and he performed splendidly, and they won. There’s no youth in that. No childhood. 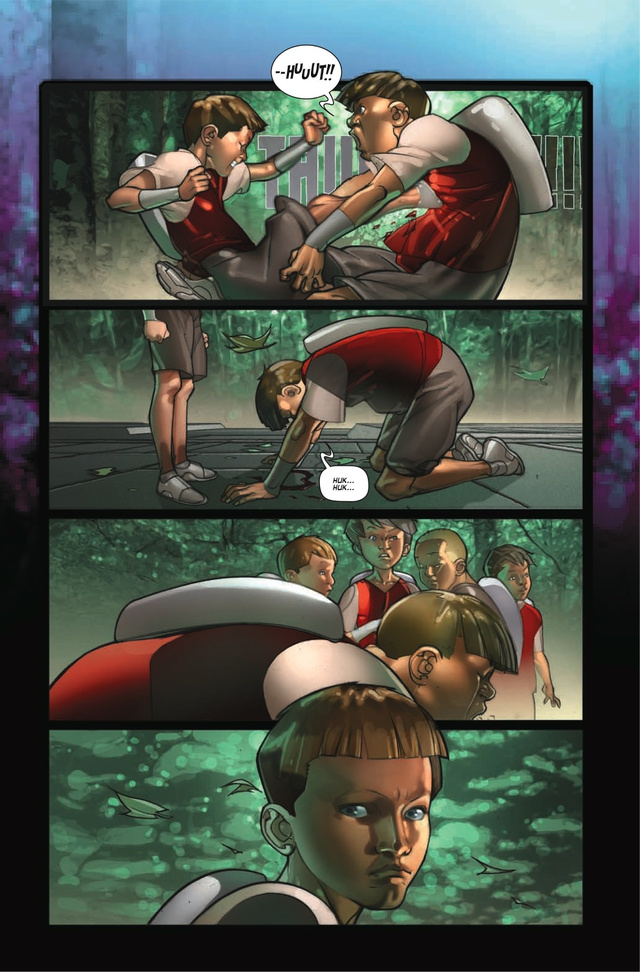 Ender’s confrontation with Stilson as depicted in the graphic novel.

Once again: it’s not that the young characters are not children. It’s that their circumstances are not childlike. There’s no nurturing and safe environment. And it’s goes beyond just Battle School: Valentine observes to Peter, “They call us children and treat us like mice.”

There’s absolutely nothing new with adolescent themes of estrangement, of course. Every teenager spends a decent amount of their time feeling that no one else understands. And so it’s a pretty common theme in literature targeted to that audience. But Ender’s Game wasn’t originally written as YA fiction and (for me at least) the resonance is actually much more profound as I get older than it was when I read the novel as a child myself.

The reason for the resonance is that I’ve come to believe more and more that adulthood is a fiction. I believe that in deep and meaningful ways there are only children on this Earth, and it brings new meaning to old phrase, “I am a child of God.”

Obviously I’m not denying physiological development, going beyond just size and sexual maturity to encompass myriad changes in brain function and so on. But I do think that a lot of the elements of “growing up” are faked, and faked badly. To be an adult is to take on responsibility, to not show fear, to teach instead of to learn. These are all necessary activities as we age, and we shouldn’t shirk from them. But we should probably also keep in mind that we’re just pretending. It’s a facade. We frequently feel overwhelmed by the responsibility, taste fear on the inside no matter what we show to the outside world, and realize that we are desperately in need of someone to teach and guide us.

The mirage of competent adulthood is only possible to maintain within the narrow confines of artificial routine. The more we specialize, the easier it is for us to swim in the shallow waters of our specialties. To feel secure. As long as we’re doing today more or less the same thing that we did yesterday we think that we are masters. But all it takes is one really unexpected jolt to our every day routine to break the spell and shatter the narrative. An emergency, a tragic loss, a terminal diagnosis: we are all naked and tiny before the jaws of pain and fear. At our core, I think there’s really not very much to separate our adult selves from our much younger identities.

The converse holds as well, by which I mean that young children are surprisingly more “mature” than we might tend to assume. One of the most surprising things for me, as a parent of very young children, was how early in their lives they displayed a sense of dignity that was just as vibrant as any adult. Of course, without a richly developed sense of social context, little kids don’t as easily recognize when they are being patronized. But when they do detect it, they react with the same affront as any adult might. In their hopes, their fears, their aspirations, their desire for self-direction little children are not acting out some shallow and superficial simulacrum. They live the real deal.

And that’s part of what appealed to me most about Ender’s Game in my most recent read through. The sense of being overwhelmed and vulnerable, of being a child, is not something that I’ve ever grown out of. A couple of decades of experience have given me the kind of context that makes it easier to maintain my equilibrium when facing experiences similar to what I have felt before, but I find that life has ways of throwing you new experiences no matter how prepared you think you are. And also that some old pains–and also joys–can strike again in the most unexpected of times and places.

I find that when I maintain this perspective, I have much more modest expectations for myself and–more importantly–for others. If there’s one thing that we get better at doing as we get older, it’s concealing vulnerability. And that’s really quite tragic, I think, because so much of the worst behavior in ordinary human life stems from misdirected reactions to pain and fear in an attempt to conceal weakness. I find that I can be more patient and empathic when I think of others (and myself, this isn’t patronizing) as children. As in a bit over our heads.

And not just in a bit over our heads, but also in the deep end together. We have so very many different ways of trying to get the things that we want that it’s easy to forget we mostly want the same things. We have so many different ways of experiencing life that we tend to forget we’re often living very similar lives. The little feelings of peace when the wind blows across your face and clouds race across a blue sky or the heavy dread of not being sure you will succeed at a task you really, really want to accomplish: these little hopes and fears and pleasures and pains are the building blocks of our lives, and they are common across ages and cultures and time and place.

We really are all children of God.

And yes, it may seem strange to derive lessons about ordinary life from a tale of genocidal warfare in space, but that’s part of the point isn’t it? I am a geek with sci-fi in my blood and the stars always in my eyes. It’s how I live and breathe, but in a way it’s just the surface. As alien as Ender’s imagined experiences are from my real, every day life: they resonate. How much more, then, should the lives of my real neighbors–who might have zero interest in imaginary interstellar ships–resonate with me as well?

(Note, this is the third in my series of posts about Ender’s Game. The first is here, and the second is here.)

← Literary DCGD #41: Lines on the Death of Lorenzo D. Barnes
Why same sex marriage is not an attack on the institution of marriage: experiences from Europe →