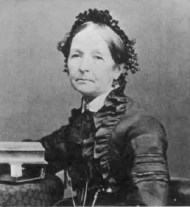 Snow’s sister evidently thought these sacrifices were important, since she made them the subject of the following poem.

This is one of the large corpus of poems by Mormonism’s best known poet, Eliza R. Snow, who was a plural wife to Joseph Smith and was therefore his widow. She was also married to Brigham Young and was the second General President of the Relief Society. Selections of her poetry are found in a two-volume work she compiled, Poems, Religious, Historical, and Political, which was published in 1856 and 1877. Ten of her poems are currently in the LDS hymnal, and several others once were in editions of the LDS hymnal, but have since been dropped. She is the first LDS poet to have her complete work collected (Eliza R Snow: The Complete Poetry

Why forsake thy friends and home?

Of thy presence, why bereave us,

And in foreign countries roam?

Must the dearest ties be broken?

No: O no, but God has spoken

And his voice must be obey’d.

Thou art call’d to bear Salvation’s

Thou hast gone to warn the nations,

In the name of Israel’s God.

For the spirit of Devotion

To Messiah’ glorious cause;

Thou has cross’d the pathless ocean,

For the gospel proclamation

Must be sounded far and near;

That the best of every nation,

May in Zion’s courts appear.

Thou art now a standard bearer

On a distant mountain top;

And perchance, art made a sharer

For the Lord designs to prove thee

If his voice thou wilt obey;

Therefore from the friends that love thee,

Thou art parted far away!

Thou art call’d thyself to sever

From the land where kindred dwell!

But it will not be forever—

In soft unison with thine.

That th’appointed time may come,

When thy foreign mission ending,

We shall bid thee “welcome home.”

I must admit some embarrassment at emphasizing the sacrifice of serving a mission–I think we should find value in the sacrifice itself instead of any recognition of that sacrifice. On the other hand, there is little doubt that many missionaries, like Snow, have sacrificed substantially to bring the gospel to those who don’t have it. And those sacrifices are discussed frequently in the literature that the Church provides.

But most of all, we must admit that such sacrifice is often necessary, both for the edification of the missionary and in order to take the gospel to all the world. There is simply no other way to effectively take the gospel to remote areas of the world other than traveling there, living with the natives, and presenting the gospel to them in their own tongue and with at least some knowledge of their culture.

And even if I’m uncomfortable with being recognized for what I’ve done (not that it has been any great sacrifice), I do think that we should understand that sacrifice is often required and be ready to perform those sacrifices for others–even those we don’t know.

← Literary DCGD #38: Song of the Sisters of the Relief Society
Ender as the Everyman →