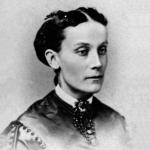 The world today treats leaders with honor and deference, giving those who manage to become leader of government and society the benefits available to the rich, while shielding them from many of the cares of life, and, at times, from their own errors and sins. Lesson 18 in the Lorenzo Snow manual makes it clear that such benefits and deference are not what Church leadership are about (and I wonder if governmental and other leadership shouldn’t also avoid these trappings). Instead, Church leadership is about serving others, and whatever benefits from that leadership should come after this life.

The following poem says as much about the Church’s second prophet and president, Brigham Young.

Its author, Sarah Elizabeth Carmichael, was considered a poetic genius among Mormons. Born in 1838 in Long Island, New York, she moved with her family to Nauvoo, where they joined the Church. Arriving in Utah at age 12 (1850), Lizzie somehow gained an education when such was hard to come by and in 1858 published her first poem “Truth” in the Deseret News. Her work soon gained the attention and approval of Eliza R. Snow, who wrote “Make room for the rising minstrel / List, list to her minstrelsy; / Its numbers are rich and truthful, / And pure is its melody.” Recognition of her skill was not limited to Utah, and in the 1860s her poetry was anthologized by Mary Wentworth and William Cullen Bryant, and is said to have been reprinted, usually without attribution, in newspapers throughout the U.S. Lizzie published a volume of poetry in early 1866 and married a non-Mormon former Army surgeon, Jonathan M. Williamson in the latter part of that year. About a year later she developed a mental illness that debilitated her for the rest of her life. Since her husband preceded her in death in 1882, she was confined to the state mental hospital in Provo until her death in 1901.

We do not call thee Chieftain,
We do not name thee King;
We wreathe no brilliants for thy brow,
No ermine round thee fling;
And thou art crowned, but with the light
That gilds the throne above;
Thy lofty spirit’s wealth of power,
Thy people’s clinging love.

We do not call thee Chieftain,
Thy cheek would flush to hear
Earth’s titles woven with thy name,
And whispered in thine ear.
As well presume to gild the sun,
Or paint earth’s brightest flowers;
We only call thee Brigham Young,
We only call thee ours.

We do not call thee Chieftain,
Let golden crowns be wrought
For brows unhallowed by the touch
Of soul ennobling thought;
But thou – the purest, holiest prayer
To listening angels flung
Is whispered when the people breathe
The name of Brigham Young.

There is, I think, a balance in the deference and honor we extend to our leaders, something that from time-to-time tips one way or another. The influence of the broader culture we live in probably influences us to treat our leaders with more honor and deference than we should, and certainly we should try to re-balance the relationship.

But the point of the lesson isn’t how we should treat our leaders, but rather how we, when we are leaders, should act; since in Mormonism many members are called as leaders at some point in their lives. In that sense, Carmichael’s poem gives us a guide to what we should expect. The true honors and deference come not because of the office, but because of what leaders do in the office, and the outward benefits come after this life, not while leaders hold an office.

To put it the way that Lorenzo Snow does, “Work for [those you have stewardship over], and do not confine your thoughts and feelings to your personal aggrandizement.”