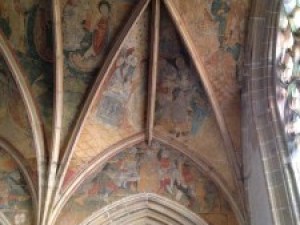 Almost 7, in the village church of Kernascléden, in the heart of Brittany, which is the heart of Catholicism in France.

The sign on the door says Vespers are at 7, just like they are every night, even tonight, July 14, when most people in France are singing the Marseillaise instead of the Gloria. I always like Vespers, but I wonder what in the name of the Abbé Sieyès they could possibly sound like in a remote place like this? A harried five-parish pastor coaxing along a few reedy voices?

Not exactly. Two youngish nuns in tan habits enter the church from a side door up front, set three small candles on the altar, and light them. Maybe they’re helping. Setting things up for the priest. Then one opens the door of the small tabernacle where the consecrated wafers of the Eucharist are kept, removes one, and sets it in a sunburst-styled monstrance that she places on the altar as well, right behind the candles. Maybe the nuns are in charge.

They each take a seat on the aisle of the front row, facing the altar, not the audience, which consists of five other women, one old guy who can’t stand up, and one old guy (me) who can. Just what I thought, especially on a holiday: just a few. But I’m wrong about the priest: the nuns aren’t waiting for any such fellow. They’re in charge all right. They stand up to signal the start of the service. Everyone else stands too (except one old guy). Then the nuns, and a 20-something laywoman, start chanting Gregorian-style, in Latin, still facing the altar. The rest of us are free to sing along, but it’s pretty obvious we’re there to listen. And to be astonished.

The voices of the nuns rush into every gothic vault at once, behind and before and beside, until somewhere in the middle of the ceiling they whirl together into a vortex that ascends irresistibly to heaven. It helps that these aren’t just any gothic vaults, but are covered with murals from 1475 that are so overwhelmingly vibrant you feel like you will faint. The murals, and flickers of light, and lacy-stoned altar with red splashes, and sixteenth-century statues, and rays filtering through tall stained windows, combine with voices to make you realize the other world is suddenly present.

When the short chant is over, the nuns sit. One picks up an acoustic guitar, and the other a set of bongos. Oh no. Just stick with the Gregorian. But then we’re astonished again, in French this time. It’s an exuberantly different song but somehow it works with the otherwise gothic aesthetics to produce the same otherworldly effect. Embrace us Emmanuel, breathe on us; Emmanuel all-powerful; Embrace us Emmanuel, awaken us; Emmanuel all-powerful. Says the refrain.

Then an ancient harmony, with modern acoustic guitar. Then a series of prayers, some spoken, some sung in call-and-response between the two nuns, in a form I recognize, but with guitar and yes bongos. And between several of the songs and prayers long, intense, unembarrassed silence, that is no more silent than space is empty. Like space, the silence is full of energy—all the energy of the universe packed into a noiseless square inch or two. Silence that fills the vaults as densely as the singing does.

I’ve heard a lot of choirs of nuns, and laywomen. And of monks, and men. And many silences. But never anything like this.

Their voices aren’t extraordinary. Not like the voices of two tenors who led the ecumenical Vespers I attended last month in Amsterdam. But these voices go to heaven. There’s a depth, and height, to them I can’t fathom, and that makes me aware, even ashamed, of my lack. There’s a concentration and intensity to their prayers and silences and singing that says they’d be singing and praying and silencing exactly the same way whether there were 5, or 500, or no other people here, that’s how well-tuned they are.

Christians have spent a lot of ink and breath arguing about images and music in church, supposedly because of fears about violating the commandment against graven things, but maybe actually out of the clergy’s fear that people would be distracted from otherwise surely-riveting sermons. But if the point of worship is to feel the other world, then who’s doing the distracting, you have to wonder. The other world is present here thanks mostly to some totally this-worldly supposedly distracting things. Images. Light. Silences. Acoustics. Female voices.

And of course these particular females. Because it’s not all mechanics, otherworldliness. You can find good aesthetics, and voices, in a lot of places. But you can’t always find souls like these.

After the last echo has vanished, one nun stands to blow out the candles. Everyone starts shuffling across the stone floor. I approach the nun closest to me and tell her how fantastic it was. She thanks me back and asks my “first name.” I ask whether there’s a convent nearby, and she says yes, next to the rectory, where no priest currently lives. This is their church then, and they run things, can even handle the holy Eucharist; they just can’t consecrate it. A priest comes by a couple times a week to do that, and say Mass. But this is really the nuns’ church.

Are you Franciscans, which I guess from their simple habits and earthy non-manicured odiferous selves? Yes. How many are you? Just the two of them. They aren’t the holiday delegation then. Why are you in France? I’m a historian. A believing historian? Yes. I’d thought there’d be more nuns in Brittany? (Smile), pray for us. All small talk, but behind it all that depth I can’t touch, again. I’m embarrassed to find myself frankly asking her: is it difficult? Yes, she smiles, goodbye.

← Faith Crisis in a Secular Age: We’re All Thomas Now
Should I Pay For My Child’s Mission? →

9 comments for “Two Nuns Walk Into A Church”