Even as a teenager, I found the faith-promoting stories of pioneers troubling. Life was so hard for them. They sacrificed so much. They fell sick and died or buried their dead in unmarked graves along the trail and never wavered in their faith. The people in those stories were too good, too stalwart to be real. I haven’t buried a child or abandoned my family to move to an unknown frontier of a new country. And if I had to meet that kind of a challenge, I don’t know that my faith would be enough to carry me through. There is no way I can compete with that kind of faith. It is portrayed as almost inevitable and natural for them, but it seems unobtainable for me. I can’t even relate to these extraordinary ancestors of mine; the mythos that surrounds them has taken them out of the realm of reality. I don’t intend to diminish their trials or sacrifice, but these pioneers painted in the rosy glow of faith-promoting history generally seemed too perfect to be realistic role models for me.

So it’s no surprise that my favorite book about the pioneers was not written by a Mormon.

It’s Wallace Stegner’s The Gathering of Zion: The Story of the Mormon Trail 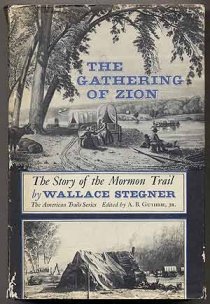 .  Stegner writes in the introduction

“I should prefer to deal with the Mormon pioneers, if I can, as human beings of their time and place, the earlier ones westward-moving Americans, the later ones European converts gripped by the double promise of economic betterment and eternal life. Suffering, endurance, disciple, faith, brotherly and sisterly charity the qualities so thoroughly celebrated by Mormon writers, were surely well distributed among them, but theirs also was a normal amount of human cussedness, vengefulness, masochism, backbiting, violence, ignorance, selfishness, and gullibility…I shall try to present them in their terms and judge them in mine. That I do not accept the faith that possessed them does not mean I doubt their frequent devotion and heroism in its service. Especially their women. Their women were incredible” (12-13).

Stegner does a wonderful job. The pioneers he writes about are real people, struggling to cling to their faith through real doubts and hardships. There were heroes and scapegoats, good decisions and organization as well as poor planning and mistakes. The heartbreaking ordeal of the Martin handcart company is all the more devastating in Stegner’s retelling because it is so human. The people were so eager, so trusting, that they put themselves into avoidable peril. Consider this:

“There in a mass meeting they discussed the question raised by some of the more cautious elders: whether to push on through or go only so far as some good camping site along the Platte, perhaps Wood River just beyond Grand Island, and there hole up until spring. Taking part in the debate were several of the Iowa City agents, including W. H. Kimball and G. D. Grant, who had hurried on to the Missouri as soon as Iowa City was cleaned out. Like many others present, they knew the trail and the uncertain fall weather of the mountains; like many others, they were intoxicated with zeal to prove the handcart plan sound…

“One voice, that of Levi Savage, was raised strongly on the other side. He said that such a mixed company would surely suffer greatly if it tried to cross the plains and mountains so late. With the best of luck it would be nearly the end of October before they could arrive, and the trailwise knew it could snow in the mountains a good two months before that. He would not risk it. But when they took a vote, he voted alone. The Lord, the others thought, would temper the wind to His lambs. Savage’s response did him honor both as a Saint and as a man. He said, “Brethren and sisters, what I have said I know to be true; but seeing you are to go forward, I will go with you, will help you all I can, will work with you, will rest with you, will suffer with you, and if necessary I will die with you.” It would not prove necessary that Savage die with them, not quite. But some of them would owe him their lives before they reached the valley, for he was one of the hardy and experienced one who kept them going” (239-240).

The standard Mormon focus on this story does not allow for dissent or criticism; rather it reinforces the moral that none of those who survived that journey left the church. But that reading seems to both gloss over the very real suffering of those idealistic saints and denies us of the opportunity to learn prudence from their faith-infused lack of caution. We lose the supreme human faith of Levi Savage. And most troubling from my point of view, a wart-free story puts all those pioneers, undifferentiated,  in the category of the super-human, portraying them as unconflicted sanctified saints whose level of faith is forever out of our mundane latter-day reach.

I love that Stegner presents the pioneers in full color. His is no whitewashed history. Some of these saints were petty, judgmental, and less than faithful. They weren’t perfect. But they were fallible people who earnestly believed they were following a prophet of God and struggling to fulfill his commandments. It is because of their failings that they are heroic. These are people that I can relate and aspire to emulate.

One final note. In light of the recent NYTimes article Stegner’s words are particularly relevant today:

“At a meeting of 107 missionaries about to go abroad in August, 1852, Brigham Young decided to announce publicly the doctrine of spiritual wives, and the announcement, together with the doctrinal justifications by Orson Pratt, was published in the Deseret News. Not even after this would missionaries discuss polygamy freely; they were instructed to say as little about it as possible, and it is likely that many a convert arrived in Salt Lake City in the later 1850’s still persuaded that it was an ugly rumor perpetuated by the enemies of the Church. Nevertheless the admission was public, and could be corroborated in the newspapers, and it must have had something to do with the decline in number of conversions and the large number of apostasies during the ‘50’s. And yet not so many apostasies and not such a decline in conversions as one might have expected” (211-212, emphasis added).

That last line of Stegner’s gives me hope that we’ll be able to weather the current trial we have of confronting our history. And if you want to learn more of our uncorrelated history, this book is an excellent place to start.

19 comments for “Not quite “Faith in Every Footstep””