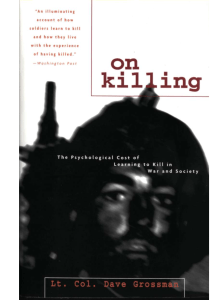 This week I finished reading On Killing: The Psychological Cost of Learning to Kill in War in Society, but I knew I would be writing about the book on Times And Seasons long before I finished it. Despite the seemingly narrow focus of the title, On Killing has broad and sweeping implications for understanding human nature, and it has particular if unexpected relevance to Mormon theology.

I  must start with the central thesis of the book, however, which is that humans have an incredibly strong inhibition against killing other human beings. The first quantified research in this field came from the work of S. L. A. Marshall who, in post-action surveys during World War II, found that only 15% – 20% of infantry rifleman in close quarters combat fired their weapons at the enemy. This result seems shockingly counter-intuitive, but Grossman draws on a wide range of data from other wars–everything from the campaigns of Alexander the Great to the American Civil War–to show that Marshall’s findings are not an anomaly. They are the norm.

Grossman goes on to explain how the reluctance to kill factors into the complex nature of combat stress with more shocking historical data. He writes that “Prior to World War II, psychologists and military theoreticians… predicted that mass bombing of cities would create the same degree of psychological trauma see on the battlefield in World War I.” First Britain and later Germany endured precisely such massive bombing campaigns:

During the months of firebombings and carpet bombings, the German population experienced the distilled essence of the death and injury suffered in combat. They endured fear and horror on a magnitude such as few will ever live to see. This Reign of Fear and horror unleashed among civilians is exactly hat most experts hold responsible for the tremendous percentages of psychiatric casualties suffered by soldiers in battle. And yet, incredibly, the incidence of psychiatric casualties among these individuals was very similar to that of peacetime.

This bewildering results stands in contrast to the experience of combat soldiers in World War II. Grossman summarizes a study by Swank and March and which found that:

After sixty days of continuous combat, 98% of all surviving soldiers will have become psychiatric casualties of one kind or another. [The study] also found a common trait among the 2 percent who are able to endure sustained combat: a predisposition toward “aggressive psychopathic tendencies.”

The difference between the reactions of soldiers and civilians (along with other non-combatants subject to combat danger) is two-fold. First, only the soldier must wrestle with an an obligation to kill the enemy. Secondly, the horrific danger of air raids and artillery spares non-combatants from what Grossman calls “the Wind of Hate”, by which he means the dehumanizing hatred which the enemy soldier must employ to overcome his own reluctance to kill. Killing from 10,000 feet is relative easy, both for the bombardiers and pilots and also–in a sense–for their victims below. Neither must see the face of the other.

From there, Grossman goes on to explain how modern armies incorporated aspects of psychological conditioning to overcome this inhibition. In Vietnam, an estimated 90% – 95% of American infantryman fired at the enemy during combat, which is one reason the United States never lost a conventional military confrontation in that war. However, as Grossman argues, the long-term effect of the killing conducted by American soldiers combined with the lack of traditional support mechanisms at home led to unprecedented psychiatric casualties long after the war had ended. Grossman also goes on to argue that the violence of modern American media is functionally equivalent to the desensitizing training of modern militaries without the safeguards of strict obedience to authority. According to his research, it is only advances in life-saving medical technology which artificially keep homicide rates low despite ever increasing violence from our combat-conditioned youth.

All very interesting, you may say, but what does any of it have to do with Mormonism? I believe it has a lot to tell us about the unique Mormon belief that coming to Earth and receiving a physical body is ascent rather than descent.

The first thing to note is that when killing is accomplished at a psychological distance–via artillery or even a sniper’s scope–the resistance drops drastically. Secondly, this resistance to kill is not uniquely human. On the contrary, the inter-species “fight of flight” response is replaced or augmented in almost all species with a “posture or submit” response that avoids intra-species killing. Together, these observations prove that the moral virtue of empathy and the heroic resistance to shedding the blood of our fellow human beings is a property we inherit primarily via our bodies, not our spirits.

The second thing to note is that it is not killing or death that are the real focus of trauma, but rather antipathy itself. Impersonal death–even the horrific massacres of massive air-raids–do not hold the trauma that comes from being so despised by another human being that they will look you in the eye with loathing and kill you closely, personally, and almost intimately. It is hating and hatred that traumatize more than killing and death.

So what are some possible conclusions to draw from these observations? The first is simply a renewed awe at God’s handiwork. So often we think of our bodies as being low and base, and even when Mormons try to rise above our anti-body intellectual heritage oftentimes the best we can do is praise the physicality of the body, as though it were a particularly well-engineered locomotive device for our spirits. Not to knock opposable thumbs, but there is simply more to our mortal bodies than exceptional tool-use capabilities. Quoting from Grossman again:

Holmes records another veteran who…observed that some of the marines he was with in Vietnam reached a point of reflection after battle in which they “came to see the young Vietnamese they had killed as allies in a bigger war of individual existence, as young men with whom they were united throughout their lives against the impersonal ‘thems’ of the world.” Holmes then makes a timeless and powerful perception about the psyche of the American soldier when he notes that “in killing the grunts of North Vietnam, the grunts of America had killed a part of themselves.”

The biological inhibition to killing is not merely evolutionarily convenient. It carries a profound philosophical payload. Our very bodies bear within them the drive to love and value each other in a resistance to killing so strong that in reality many would rather die than kill. It’s as though God had inscribed the blueprints of Zion in our very DNA, if only we have the eyes to see what is written there.

Another conclusion is that, by thrusting our spirits into this maelstrom of passion and danger, we are subject to much greater–or at least much more acute and immediate–ethical considerations than a spirit unaided may be able to appreciate. There is, therefore, a chance for faster moral development because of the increased moral sampling of our mortal bodies.

But, for a third and most speculative conclusion, we may go even farther than that. What if the body is not merely a means to provide the spirit with greater opportunity for moral growth, but is itself an integral part of that growth? After all, Mormons do not believe that our physical bodies are merely useful instruments during our mortal probation, but that–in some sense–this spirit-body fusion is a permanently elevated form of being. How can this be?

If I assume for a moment that the “I” we think of when we deliberate consciously is roughly synonymous with our spirit and everything else comes from the body, I think it’s possible to create a model to answer that question. If we were required to decide every moral response through conscious deliberation it’s easy to see how our progress and development could be slow and stunted. In this life, where time and deliberation are finite resources,we would go from exhausted to paralyzed to dead within a week if every decision had to be made via conscious deliberation. Even in the pre-mortal existence, however, it’s easy to see how offloading some of our moral learning into reflexive storage could provide useful advantages.

And that, in a sense, is what we can do with the feedback system that exists between mind and body. After all, when we’re hungry or exhausted, our capacity to deliberate and act ethically are constrained. But we can also exercise conscious decisions to outsmart our bodies, most frequently by selecting an environment conducive to providing the incentives we know are likely to lead to good  behavior. In simple terms: try to stay out of the kitchen when you’re fasting. It’s a lot easier not to eat if you avoid going near food than it is to wrestle with your appetite once you smell fresh strawberries in June. Over time, relatively infrequent, conscious decisions can have a cumulative effect on our body: crafting and creating character through habit, practiced response, and self-conditioning.

We are born into unruly, imperfect, and recalcitrant bodies full of their own behaviors, preferences, desires and motivations and those that aren’t baked into our DNA are often learned from our environment before we are old enough to understand what is going on. There is no blank slate or fresh start. And yet our bodies do not represent just a challenge to overcome or a struggle to endure, but perhaps also divine promise as we turn the untamed wilderness of our inner lives into a garden of love and beauty.

Although I think there’s a lot more to consider, that’s as far as I’ll go today. I just want to wrap up with a final thought from Grossman’s sensitive book:

We may never understand the nature of this force in man that causes him to so strongly resist killing his fellow man, but we can give praise for it to whatever force we hold responsible for our existence.

58 comments for “Mormonism and Embodiment: Learning from Killing”