Malicious compliance is the idea of using the letter of the law to intentionally violate the spirit of the law. It is perfect obedience. It is also sabotage.

Since so much trouble seems to arise from the gap between the letter and spirit of the law, we might reasonably ask: why not close the gap? Why not just write down the spirit of the law in the first place? I think the answer is at least in part that whatever is written down and then read and interpreted by a human being is necessarily going to fall short of the spirit. If by “the spirit” we mean the ultimate truth upon which some particular edict of God rests, then “the spirit” is like the actual, true laws of physics that govern the universe and the letter is like whatever the current best interpretation of those rules might be.

If this analogy holds, then right off the bat we should be deeply suspicious of the finality of any revealed law. Anyone who accepted Aristotle’s model of physics as final would have missed out on Newton, and anyone who thought Newton had the last word would have subsequently been left behind by Einstein. In other words, if laws are imperfect translations of perfect principles into our particular place and time we should not only be prepared to accept changes in God’s law as they arrive, we should expect them.

Contrast the assumption that revealed laws come with an expiration date with Rachael Slick’s account of her conversion from Christianity to atheism. Slick, who is the daughter of the founder of the Christian Apologetics and Research Ministy Matt Slick, described her Pauline experience for Patheos:

My certainty was my strength — I knew the answers when others did not. This changed one day during a conversation with my friend Alex. I had a habit of bouncing theological questions off him, and one particular day, I asked him this: If God was absolutely moral, because morality was absolute, and if the nature of “right” and “wrong” surpassed space, time, and existence, and if it was as much a fundamental property of reality as math, then why were some things a sin in the Old Testament but not a sin in the New Testament?

She then writes: “Alex had no answer — and I realized I didn’t either,” and then ends the paragraph (and begins her journey to godless enlightenment) with the stronger conclusion that “there was no possible answer that would align with Christianity.?” (emphasis original).

Thus we see the potent danger of failing to reconsider our premises. Slick did not understand that the relationship between God’s commandments and eternal truth is more complicated than simple equivalence. In that, she may be an outlier, but there is a related assumption that is much more common, and that is that the purpose of laws is solely compliance. In other words, there’s some absolute morality of which we are ignorant. God wants us to obey it, and so he slices and dices it into bite-size chunks which we must then follow. When we obey: good. When we disobey: bad. The end.

The problem with this view is that it rules out progress. So let’s revisit the physics analogy to see how progress might play out.

In Aristotle’s time one of the fundamental axioms of physics was that an earthly body (there were separate rules for the heavens) wanted to get as close to the earth as possible and then stop there. This is an intuitive notion that works very well for predicting most every day experiences. Water runs downhill, dropped objects fall, bounce a few times, and then come to rest, and if the ox stops pulling the wagon the wagon will stop. In that sense, it’s a good revealed law. However, we know that it is ultimately false. In reality an object in motion remains in motion until a force is applied to that object to change its motion (for example, by slowing it down or altering its direction). This is the gist of Newton’s First and Second Laws. 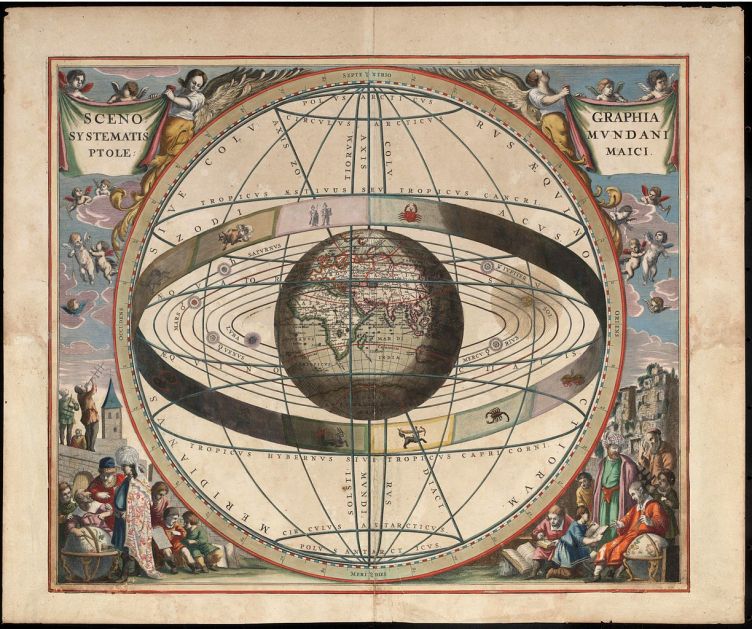 Wheels within wheels: the Ptolemaic system tried to maintain Aristotle’s physics and rectify a geocentric universe with astronomical observation by adding layers of complexity to the original, simple, and erroneous model.

But the really important observation is that just stopping by and delivering Newton’s laws to Aristotle wouldn’t have been very convincing because, within Aristotle’s paradigm, Newton’s Laws don’t work. There was no frictionless surface in ancient Greece that could have been used to illustrate the idea that a body in motion tends to stay in motion, for example. With a few specific exceptions, any conventional experiment would have immediately disproved Newton’s laws to the satisfaction of anyone alive at the time.

This is why Newton’s physics revolution depended on the earlier revolutions of Galileo, Kepler, and Copernicus. Only by breaking the earth/heaven dichotomy and presuming that there was one set of rules that governed motion everywhere was Newton able to gain access to a set of examples where his laws actually played out. He was subsequently able to envision how the behavior of objects on earth could be fitted in as a specific case of the general physical laws that governed the motion of the planets and moons. With no telescope, no careful astronomical observations, and no heliocentric model of the planets orbiting in ellipses (not circles) Newton’s Laws would have seemed false to Aristotle. If we wanted to teach Aristotle Newtonian physics, therefore, we would have had to start by teaching him how to grind lenses. Thus we can see that for God to help us progress, He may have to enact commandments that make very little sense based on our starting point. (If you told Aristotle that making lenses would eventually prove that objects just go on forever until something stops them he would probably have considered you to be wasting his time.)

This in turn shows the imperative nature of looking beyond compliance. We are not just to follow laws which we have been given (although that is a necessary first step), but also to seek to understand these laws. We ought to view them as rungs of a ladder to be ascended. After all, obedience is only meaningful when we have a free will to willingly subjugate to laws we don’t fully understand. If God just wanted compliance, he could have had robots instead of children.

This vision of obedience never absolves us of responsibility. Because we are expected to willfully follow God’s commandments as a self-directing participant, we never get to shut off our minds or hearts and just go on autopilot. This is where we get into trouble, because natural selection has ensured we inherit physical bodies that are predisposed to the path of least resistance. The human body as an organism is anti-existential. It wants only to know the easiest way possible to get the minimum amount necessary. When applied to the principle of obedience, it tells us that we should just check off compliance on our to-do list and go watch TV.

This tendency to flee from freedom manifests in surprising ways, and one of the most pernicious is the frequent complaint that General Authorities ought to give ever more granular, nuanced, and refined versions of the letter of the law. Or, to put it more simply, that the General Authorities ought to explicitly enumerate all the many exceptions to their general counsel. This they will not do, and must not do. Elder Oaks has said:

As a General Authority, it is my responsibility to preach general principles. When I do, I don’t try to define all the exceptions. There are exceptions to some rules. For example, we believe the commandment is not violated by killing pursuant to a lawful order in an armed conflict. But don’t ask me to give an opinion on your exception. I only teach the general rules. Whether an exception applies to you is your responsibility. You must work that out individually between you and the Lord. (From a CES Fireside on May 1, 2005 in Oakland, CA)

Notice that if every possible exception were explicitly provided, our responsibility would be greatly diminished. Which is to say our freedom–our range of meaningful action–would be greatly curtailed.

I realize it sounds counter intuitive, but there is such a thing as too much obedience. If the absolute moral truths could be distilled down into a series of step-by-step instruction we could obediently follow every one and learn nothing. We could be as innocent not like Christ, but like a stone. This is the ultimate malicious compliance, following each and every letter of the law by sabotaging the progress that is the reason we were given those laws in the first place.

General counsel, which is to say direction which may very well have exceptions, confounds this automatic obedience. It forces us to engage with the counsel, consider it as it applies to us, and forces us to take responsibility for either following or opting out of the counsel. Those who wish to have every exception documented are in effect clamoring for more letters of the law, and the refusal of the General Authorities to build that particular golden calf is a safeguard against malicious compliance.

← Getting Dirt in Jesus’ Eyes
An Information-Rich Gospel: Correlation and the Growth and Maturation of the Church →