The principle behind Mathew 10:34 (“Think not that I am come to send peace on earth: I came not to send peace, but a sword”) is not that Jesus came to foster contention (see, e.g., 3 Nehi 11:29), but that the presence of the Savior forces people to make decisions. C. S. Lewis’s trilemma is an example of what I have in mind: we must accept that Jesus was mad, that he was evil, or that he was divine. That he was a nice guy who taught good principles but was not divine is not compatible with the textual description of his words and actions. The easy path is ruled out.

If we take seriously the millennial aspects of Mormonism–that there is a day of Christ’s returning and that it is drawing closer–then it would make sense to apply Matthew 10 to the world at large. That’s what occurred to me, in any case, when I read David Brooks’ “book report” on Charles Taylor’s “A Secular Age”. Christ is drawing near. Decisions must be made. As Brooks summarizes:

Taylor’s investigation begins with this question: “Why was it virtually impossible not to believe in God in, say 1500, in our Western society, while in 2000 many of us find this not only easy but even inescapable?” That is, how did we move from the all encompassing sacred cosmos, to our current world in which faith is a choice, in which some people believe, others don’t and a lot are in the middle? 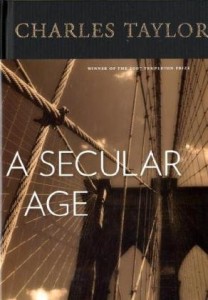 The topic of faith crises seems increasingly prominent among Mormons as numerous new blogs, groups, and seminars indicate. A common theme of these organizations is that faith crisis often arises when simplistic historical narratives confront ambiguous historical realities. I do not doubt that this is the case, but I wonder if this proximate cause can be seen as  a subset of the greater ascendancy of secular ways of thinking. In centuries past, religious or supernatural views were taken as axioms with which to construct our narratives of the world. Today, however, faith propositions are more likely to be seen as appropriate subjects of empirical and rational analysis. It is, as Brooks characterizes Taylor “a choice”.

Brooks goes on to describe some consequences of Taylor’s theories of life in a secular age in a way that powerfully resonates with those who spend their time thinking about faith crises:

When faith is a matter of personal choice, even believers experience much more doubt. As James K.A. Smith of Comment Magazine, who was generous enough to share his superb manuscript of a book on Taylor, put it, “We don’t believe instead of doubting; we believe while doubting. We’re all Thomas now.”

Putting the link between secularism and doubt in the context of Matthew 10 puts it in a very different light. Instead of a narrative of religion receding before the juggernaut of scientific progress leaving an increasingly diminished and fragmented God taking refuge in the gaps, there’s an alternative view in which preparation for the approach of a Savior corresponds with an increase in polarization enacted by the secularization of the cultural environment we inhabit. Like a sword, He divides.

If this is the case, then a scripture which may assume new relevance to those who confront doubts is 1 Peter 4:12:

Beloved, think it not strange concerning the fiery trial which is to try you, as though some strange thing happened unto you.

In context, of course, that scripture was originally about brutal repression and persecution of the early Christians. But, likening the scriptures unto ourselves, it makes sense that in the run up to the Second Coming the world would face a situation in which faith could not longer be taken for granted, but must become a choice that each individual cannot defer or delegate to anyone else.

I believe this trial may be easier to endure when we understand that it is not “some strange thing.” Of course the mere presence of an alternative narrative doesn’t prove that it is the right alternative, but it may provide a powerful new context in which to see struggles with doubt. Not as evidence of unrighteousness or failure but rather as an inevitable consequence of the rising stakes and adversity.

It’s also important to understand the inescapable duty of deciding for ourselves. It is clear that–while absolutely not the explanation of all expressions of doubt everywhere–there is a clear trend among some who suffer through doubt to wish that the cup could be passed. This is often what lurks behind laments that General Conferences talks are so unresponsive to real concerns or that the General Authorities fail to address the root problems, or so on. There’s at times an unspoken and understandable desire that someone else intercede on our behalf, wrestle with the angel in our stead, and deliver the answers that will make belief simple and easy again. That’s not a prayer that can be answered because the increasing difficulty of faith seems to be either a part of God’s plan or least an unavoidable attendant to it.

Understanding that faith crises are a part of the plan, or at least an anticipated challenge, can empower us to reach out with compassion instead of judgment to those who are struggling and also to bear our own struggles with greater patience and with less fear and confusion. Along the way, it can also help manage our expectations for what our leaders or the Church as an institution can be expected to provide in response to these struggles. Of course I hope that friends, family, the scriptures, and the Church can be relied upon to offer assistance, but in the end there will always be doubts and struggles we must face on our own.

43 comments for “Faith Crisis in a Secular Age: We’re All Thomas Now”