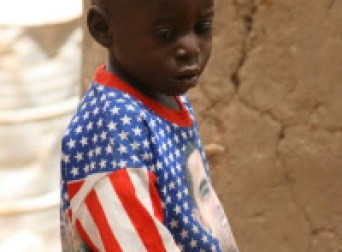 Many Mormons in Utah are aware of the fact that a converted Mormon is running for president in Mali. Indeed, Yeah Samake, an important social entrepreneur in Mali, joined the Church in 2000 while studying at the BYU, and indeed he has registered as a candidate for the upcoming presidential elections in 28 July 2013. He is the mayor of Ouélessébougou, a community consisting of a small town and a group of villages in South Mali. Based on his success as mayor, he is running for president, already in 2012, but again in the present elections. Election campaigns cost money – no people know that better that Americans – and Samake has been able to generate quite some funds. During the last months he has run an effective campaign, basing himself on a successful NGO, Mali Rising Foundation, on a platform of decentralization, anti-corruption and ending aid dependency.

As LDS we do not have a whole lot of presidential candidates; the most recent one was Mitt Romney, who – as some of my readers might possibly remember – has lost the race. Having an American candidate was great, and was ‘The Mormon Moment’ in the USA, and also our day in the sun of publicity in Europe. Contrary to Mormon USA the European members never really believed in a victory for Romney, and anyway preferred Obama as a president. So in the end the USA elections ran conform the wishes and prayers of the International Church, not the Domestic one. But enough of rubbing salt into half healed wounds, for we have now a Malian Mormon running for President. Is this the Mormon Moment in Mali? Are we getting a Mormon President in an African country? Knowing the usual USA expertise on geography outside the US, I think that many LDS would have to google to find Mali on the map of Africa. And I wonder how many could right away mention the name of its capital (Bamako).

Nevertheless, Mali is important and Mali is in trouble, so these presidential elections are much more than the habitual ritual dance that characterizes many elections in Africa. Mali is important because it has been one the of strongholds of democracy in Africa, and because it has been, up till now, one of the countries where the major world religions cohabited in peace. It was an example for other countries, where presidents were elected democratically, and then after their term stepped down for new elections. Alfa Oumar Konare, the first elected Malian president and a good friend of mine, was the first to do so. For me personally, Mali is of supreme importance, as I have been working as an anthropologist in central Mali for the last three decades, mainly among the Dogon of the Bandiagara region, a well known tourist destination.  It is a country of great charm, rich cultural heritage and up till recently almost absolute safety, a great place to work in. I have a house in one of the Dogon villages, and are considered as kith and kin of that village.

What is now the problem in Mali? After the fall of Lybian president Khaddafi in 2011, his army disbanded, and many of his soldiers were hirelings from North Mali, mainly Tuareg, the ‘blue men of the desert’. They came home with all their weapons, and joined the dormant forces for Tuareg independence, reviving a conflict between North and South Mali that had been simmering for decades. Their impetus changed the political scene completely, and the regular Malian army was totally unequipped to handle this. So the army revolted and brought down the president. It was a strange coup, because they did not aim at governing, they simply wanted some money for the army. Eventually an interim government was formed, without any popular mandate, but then the AQIM was formed from the North, Al Queda in the Maghrib (= desert), a movement of assorted jihadists that took over from the Tuareg. So instead of a Tuareg rebellion, Mali had now an Islamist uprising on its hand, well armed, reasonable organized, and anti-Western. The AQIM quickly conquered the North, an immense stretch of desert, with the three main cities of Kidal, Gao and the mythical place of Timbuctoo – which indeed is in Mali. Whereas the Tuareg had been content with just their province in the North, the AQIM set out to conquer the whole of Mali, and threatened to take Bamako, the capital. At this point the French stepped in, and the French army quickly beat the AQIM and retook the North. Immediately the Tuareg movement moved in again, and right now the French are trying to withdraw, to be replaced by an international force from other African countries.

That is the legacy Samake would inherit. A new president faces severe challenges: to establish a legitimate government in the heart of Mali, to have the Tuareg acknowledge Malian sovereignty in their province, to prevent AQIM to strike again, and to reestablish the rule of law in the country. Quite a daunting task, and Samake is to be commended to try it, and I personally think he has an excellent platform, based on local initiative, anti-corruption and trying to break the vicious cycle of aid dependency, for at present Mali is addicted to donor money. What are his chances and how is Malian politics organized?  Malian politics has been based upon consensus: one person won, and the spoils of the regime were to be divided among all parties. The last president of Mali had no political party, but was a consensus candidate between most of the parties concerned: if they together voted him in, he was indebted to them and they would in the end all cash in. What looked like democracy was in fact dividing the lucrative jobs and contracts on the one hand, and then to govern as little as possible on the other. What are these political parties? Mali has as many parties as there are ‘big men’, rich people with money and connections who can organize a party and finance a campaign. Scores and scores of parties they have, all with names invoking ‘democracy’, ‘people’,  ‘development’ , ‘security’, ‘togetherness’ and the like. In an interview with a new leader who broke away from his former party, I asked him how his political program differed from the former one. He looked at me without any comprehension, this was clearly a stupid question: Of course his party was about democracy, development and togetherness, what else? Thus, Samake has formed his own party as well, conform Malian political culture, the ‘Party for Civic and Patriotic Action.’

‘Une parti est un Monsieur’ Malians say, a party is an individual patron. And this is where Samake has an uphill battle: a political patron has to have ‘clients’, people who are indebted to him, who will work and vote for him in the hope of sharing some of the eventual spoils. The old political elite has this kind of retinue, newcomers don’t. Samake is a relative newcomer, with followers in a small rural community. One element compounds Samake’s problem: Mali is a majority Muslim country. It always has been a tolerant Islam – up till the arrival of the AQIM – in which Islam lived peacefully together with the various Christianities (not LDS) and the strong strains of traditional indigenous religions, my field of study. Its tolerance is based on a long standing Sufi tradition, Islamic mysticism, but that does not make it much less Muslim. Having a Christian president is almost unthinkable, so Samake faces a problem on this issue as well. He is a Mormon, what for Malian means a Christian (wish it were so everywhere!), but of a brand they do not know about, which makes it slightly harder yet.

In short, Samake faces a double uphill battle. It is not sure yet whether the elections will be held at the date planned, 28 July. I myself I do hope they will, for the power vacuum in Bamako has to be filled, and the most important thing in Malian politics is not which candidate wins, but simply that everyone agrees that he has won. Policies will be exactly the same with all candidates, and the room to maneuver between the AQIM, the French Army, the International Force and the donor countries is extremely restricted. I do hope for a Mormon Moment, but I severely doubt whether we will have one, and in the end it does not matter much. In this kind of politics it is not the individual that counts, but just his legitimacy, and for that a Muslim president would be much better. I know that this is not the standard US way of looking at politics, but it is African reality. In the end, Mali has as much chance to get a Mormon president as the USA has to get a Muslim president.

12 comments for “A Mormon Moment in Mali?”