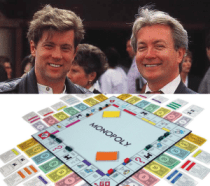 Something insidious infects our children from the moment they’re born. It’s unstoppable. It surrounds us, burrows in deep, far below our conscious minds, and like a computer virus, writes subtle programming that dictates our worldview, our attitudes, and assumptions, shaping our very reflexes… Ahem. Shifting away from threatening apocalyptic movie-trailer voice, I’m speaking, of course, about culture and tradition, terms I’ll use interchangeably here. These are not bad per se, surely every culture has positive as well as negative aspects. Rather, it is the strength of culture in shaping our unconscious mind and worldview that poses potential problems; we tend to be blind to our own assumptions and cultural inheritance, and it affects us on many levels.

The rules of Monopoly constitute one harmless example. Very few seem to know, let alone play by the written rules. (HT: John F!)1 The written rules say you don’t put any money on free parking, and when someone lands on a property without buying it, the bank immediately auctions it off to the highest bidder. If you play that way, the the game moves along quite quickly. Why, then,

is everyone playing a variant of the actual rules without actually realising it? Well [one] answer here is that no-one ever actually reads the rules of Monopoly. Monopoly is something you learn through word-of-mouth in childhood, like riding a bike or tying your shoelaces. Your mother, who never read the rules but was instead taught them by her father, taught you, and one day you will teach your children, again without reading the rules first. She passed on broken rules to you and you’ll pass them on to your kids. So the set of rules we play by is the shared cultural set of rules passed down through the generations, and not the ones written on the booklet inside the box.

We all assume the Monopoly rules we play by are the written rules, but they don’t actually correspond entirely. The real-world consequence is, we all hate Monopoly. The inherited tradition telling us the rules can be so strong that even when we DO read them, we sometimes manage to ignore the absence of our tradition and read it in, largely unconsciously.

One place this affects LDS is in our scripture reading and subsequent interpreting. We often go into our scriptures already knowing (or so we think) just what they say and what they mean, and then overlook or ignore anything to the contrary. Mormons are not alone in this, of course. Everyone inherits some kind of interpretive tradition. Evangelical scholar Peter Enns called this inherited interpretive tradition “the interpreted Bible,”and spends several pages discussing it in context of Paul’s 2nd Temple Judaism traditions regarding Adam. 2 He introduces the concept with the example of the insensitive innkeeper who turns away Joseph and a very pregnant Mary, who’s endured riding a donkey for miles. 3 We all know the mean innkeeper, and we’ve seen him in various LDS and non-LDS depictions of the birth narrative of Christ. However, he exists only in the “interpreted Bible”, the interpretation and retelling we’ve inherited culturally, but the mean innkeeper is not found in scripture.

This kind of receiving-cultural-tradition-as-scripture can happen even at high levels in the Church.

Eugene England asked [Elder Joseph Fielding Smith] in a 1963 private interview whether it was necessary for a faithful Latter-day Saint to believe that black men were denied priesthood because of their activities in the preexistence, Elder Smith said, “Yes.” But when England asked for scriptural substantiation, Elder Smith reread the relevant passages, reflected, then finally stated, “No, you do not have to believe that Negroes are denied the priesthood because of the pre-existence. I have always assumed that because it was what I was taught, and it made sense, but you don’t have to believe it to be in good standing, because it is not definitely stated in the scriptures. And I have received no revelation on the matter.”4

Joseph Fielding Smith had received a tradition that he assumed was consistent with and based on scripture, but upon rereading the relevant passages closely, he changed his mind.5

This kind of thing happens all the time, because so few of us have experience reading closely (that’s a semi-technical term) and because of that insidious power of tradition. Kirk commented about the Mormon Theology Seminar on Gen 2-3,  “This is what I love so much about the MTS, it does what nobody else seems to want to do, read scripture.” Well, trying, anyway. Twice during the MTS, I wrote a paragraph, then decided to look at the relevant passages again. It turned out that both times, in spite of reading the text closely in English and Hebrew, my received tradition was overpowering what was right in front of my eyes. Go here, and look at my completely crossed-out paragraph. It was so disconcertingly easy for me to do.

How do we deal with this?

All these suggestions about reading presumes that you are, well, reading. If nothing else, at very least reading your scriptures. President Hinckley envied your free time. I know guilt is not a good motivator, but make some time! 7 There are so many great books out there on a variety of subjects! And maybe, next time you have friends over,  think about playing a little Monopoly…

Addendum:  John Walton gets at this idea concisely in his NIV Application Commentary volume on Genesis, p. 318.

Update: I mentioned this book in the comments, but it’s worth more PR than that. It’s a great volume for challenging our cultural assumptions that we bring to the scriptures. Misreading Scripture with Western Eyes: Removing Cultural Blinders to Better Understand the Bible addresses cultural and contextual issues and assumptions, in a variety of areas, such as wealth, race, language, shame/honor, individuality/collectivism, and others.

37 comments for “The Philosophies of Men… Mingled with Monopoly (updated)”