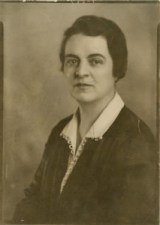 The word of wisdom is strongly connected with who we are as Mormons—it has become as much an identifier as pork is for Jews and for Muslims. We emphasize the importance of this teaching in lessons like the current Gospel Doctrine lesson (#22), and we teach it to kids almost from birth. But while section 89 was received by Joseph Smith in 1833, it really didn’t become an identifying characteristic of Mormons until past 1900 and, as I understand it, was only included among the Temple recommend questions in the 1950s.

It is perhaps no surprise, then, that it was early in the 20th century that we first have songs for children, like the following poem, that encourage keeping the word of wisdom. In this poem keeping that commandment is not only encouraged, it explicitly says we keep it as part of our identity; Because We’re Mormons.

The author was Matilda Watts Cahoon (1881-1973), an accomplished school teacher who was remembered most recently by President Gordon B. Hinckley, who remembered her leading him in a choir, “She somehow coaxed a tune out of me as a part of the boy’s chorus in junior high school. She was a great and delightful and lovely teacher.” In addition to her 39-year career in the public schools, Cahoon was the first woman delegate to the Utah State Legislature from Salt Lake County and served on the Primary General Board from 1913 to 1939. Her work appears in our hymnal today (The Light Divine, #305) and many other songs she wrote appear in the Primary songbook, including Beauty Everywhere (#232—has appeared in every Primary songbook since 1920), Builder Boys, Come to Healthland, Good Night (Day is over, night draws near), Jesus Loving Savior Dear, The Bluebirds, The Call, The Merry Lark, and Trail Along. This poem also was in the Primary songbook at one time.

Our hearts are gay and happy, Our eyes are bright and keen,
Our thoughts are clear and snappy, Our faces always clean.
Because we don’t use tobacco, alcohol or tea,
For they are just like coffee, Not good for you and me.

Our teeth are clean and shiny, Our voices light and true,
And we can shed our troubles, When work we have to do.
Because we don’t use tobacco, alcohol or tea,
For they are just like coffee, Not good for you and me.

As you would expect from a song aimed at children, there is a simplicity to what the poem says. Keeping the word of wisdom leads to happiness, clarity of thought, cleanliness and truth. And the author sneaks in a little suggestion, near the end, that work tends to solve our problems. This is, of course, something else that Mormons do “because we’re Mormons.”

In contrast, the following poem is from the Nauvoo period, and I’ve thrown it in here for fun. It appears in The Wasp, the general interest and political newspaper started in Nauvoo to print news that shouldn’t appear in the city’s more religious periodical, the Times and Seasons.

We three
Brothers be

I’m fairly sure that The Wasp picked this up more as a joke than anything, probably from another newspaper. As I read it, it seems to lampoon tobacco users, suggesting that regardless of form, tobacco users are all in some illicit cause. And I suppose that in a sense they are, but, at least today, the “cause” is the profits of a corporation bent on making money at the expense of public health.

← The Philosophies of Men… Mingled with Monopoly (updated)
Literary Lorenzo Snow #11: Father! Lead Me Out of Darkness →