Against my better judgment, and to the detriment of my workday, I allowed myself to be temporarily pulled into a Facebook debate on Friday about Mormonism and orthodox Christianity.

This went about as well as could be expected, of course. The word “cult” was used in earnest, the Tanners were quoted, and all in all it was a horrifying flashback to my high school days as an Internet messageboard crusader. (Thank goodness those days are over!) I eventually came to my senses and retreated like Luke Skywalker fleeing the Mos Eisley Cantina. 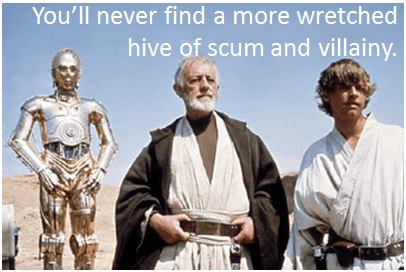 I did, however, gain some insight into the futility of arguing about the Trinity. The problem is that when Mormons and mainstream Christians argue about the Trinity, the real conflict has almost nothing to do with the subject at hand. This was underscored when a non-Mormon friend of mine posted the following YouTube video on Facebook along with the comment: “For the record, St. Patrick does rightly define the Trinity in the beginning: 3 people who are 1 God. Then it all just goes down hill.”

Now, if by “Trinitarian” one simply means accepting “3 people who are 1 God,” then Mormons are pretty unambiguously Trinitarian. In fact, I can’t think of a more clear statement of Momon belief, if we are to take Alma 11:27-28 seriously:

In my own experience, most Mormons tend to be basically social Trinitarians. But notice that I said most Mormons and not, by contrast, Mormonism. That’s because definitive theological categories and Mormonism are mutually exclusive. According to Joseph Smith:

The most prominent difference in sentiment between the Latter Day Saints and sectarians was, that the latter were all circumscribed by some peculiar creed, which deprived it’s members of the privilege, of believing anything not contained therein, whereas the Latter Day Saints have no creed, but are ready to believe all true principles that exist, as they are made manifest from time to time. [emphasis added] [1] 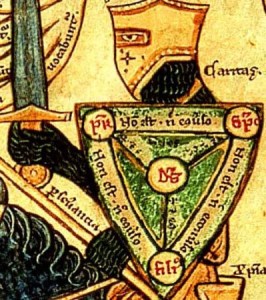 Detail of a manuscript illustration depicting a knight carrying the “Shield of the Trinity.” (Wikpedia)

The commitment of early Mormons to atheology was so strong that “in the 1830s, some Mormon leaders, like David Whitmer and William McLellin, even resisted the publication of [the Doctrine and Covenants], reflecting their hostility to rendering doctrines of the latter-day “restoration” fixed or concrete.”[2] In fact, it is the atheological nature of Mormonism and not the content of Trinitarian orthodoxy where the true conflict over Trinitarianism lies.

In this sense, the idea of the Trinity takes on a role analogous to that which Terryl Givens described for the Book of Mormon in By The Hand of Mormon: it’s not the content of the message, but the existence of the message that creates all the controversy. The Book of Mormon contains essentially no controversial doctrine within its pages, but it’s mere existence is an affront to all who believe in a closed canon and Biblical sufficiency. It is the Book of Mormon as scripture that causes all the problems. Similarly, it is the Trinity as creed that causes the problems.

But as for the content of the creed? Two prominent creeds that discuss the Trinity are the Nicene and Athanasian. The Athanasian Creed states (in part):

And the catholic faith is this: That we worship one God in Trinity, and Trinity in Unity; Neither confounding the Persons; nor dividing the Essence.

And in one Lord Jesus Christ, the only-begotten Son of God, begotten of the Father before all worlds (æons), Light of Light, very God of very God, begotten, not made, being of one substance with the Father; 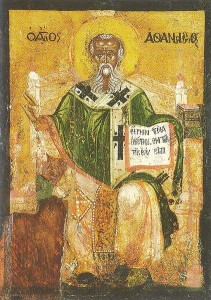 I do not think that this particular formulation with its commitment to Aristotelian metaphysics (via consubstantiality) would necessarily be popular with very many Mormons, but I don’t think that there’s anything in this statement that is necessarily incompatible with Mormonism. Today we celebrate the revelation of the disparate persons of God the Father and Jesus Christ as they appeared to Joseph Smith in the First Vision, but in truth the idea of God the Father and Jesus Christ being in two different locations is not original. Consider the baptism of Jesus Christ or the vision of Stephen from the New Testament, for example. Furthermore, Joseph Smith seems to have initially been entirely uninterested in the connection between the First Vision and Trinitarianism:

That Smith did not even reflect immediately on its bearing on the Trinity is evident in his lack of attention to the very question of number when describing his experience. In his earliest, 1832 account, he recorded that “the Lord opened the heavens upon me and I saw the Lord and he spake unto me saying Joseph my son they sins are forgiven thee,” leaving unclear whether his two uses of “Lord” referred to one personage or two, in succession.[3]

Finally, as quoted before, Amulek’s direct answer is pretty unambiguous. Although only one example, it’s a very stark one. It’s interesting that despite Mormonism’s antipathy towards the idea of Trinitarianism, the Book of Mormon contains more explicit support for it than the New Testament does. The content of the Athanasian Creed is therefore compatible with but of course not necessarily implied by Mormon scripture.

If this analysis is correct, then the greatest theological wedge between Mormons and Christianity may have been a mistake based on a combination of Mormonism’s rejection of creeds per se (irrespective of their content) and our desire to underscore the the significance of the Restoration. All things being equal, it would be nice to rectify that error. This is not to say that I believe Mormon theology should be warped by a desire to find acceptance within the mainstream Christian community, but simply that we shouldn’t go out of our way to pick unnecessary fights. It’s not imperative that Mormonism be embraced within the larger ecumenical community (although I wouldn’t mind it, either), but if we are going to be given the boot I would like to earn that distinction for something we actually believe. On the other hand, Mormonism’s compatibility with Trinitarianism as outlined in the Creeds may be necessary but not sufficient for our inclusion by mainstream Christians. If “3 people comprising 1 God” doesn’t cut it for some folks, then so be it. Even in that case, however, we should probably not be quick to say we reject the Trinity since–at least to the lay members of most Christian denominations–we really don’t.

It’s not that I seek to minimize Mormonism’s distinctness, but simply that I would rather draw distinctions based on substantive differences. It would also be nice to shift the emphasis away from what Mormons reject towards what we embrace. A lot of our beliefs, from the weeping God to the pre-mortal existence to free will, are worth standing up for. Rejection of a belief that actually seems perfectly commensurate with our scripture, however, just isn’t.

[1] The Journal of Joseph: The Personal Diary of a Modern Prophet, compiled by Leland Smith Nelson, p. 203.

63 comments for “Don’t Debate the Trinity”