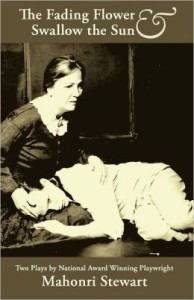 Mahonri Stewart recently released two of his plays–The Fading Flower and Swallow the Sun–together in a single volume. I found both of them to be so compelling, that I’m truly sad that no productions have been put on or are scheduled within 1,000 miles of where I live on the East Coast. More than just enjoyable, however, I found that they presented a strong and compellingly Mormon artistic perspective. While there is no doubt that the subject matter of both plays is Mormon, what really struck me was less the viewed and more the viewpoint.

The Fading Flower centers around the faith struggles of Joseph Smith’s youngest son David, who was born after his father’s death. As he grows older, he is  caught between the rival factions of the RLDS Church (with whom he was raised and with his brother serving as President) and the Brighamites (the objects of his missionary endeavors). So the setting is clearly Mormon, but what is really Mormon is David’s tortured journey to pursue the truth about his father’s practice of polygamy. Anyone can write about the subject of Mormon polygamy (just ask HBO), but looking at the issue through the lens of David becomes a powerful and uniquely Mormon reflection on the peril and promise of living in such close proximity to our historical legends.

Of course with such a controversial and painful topic at the heart of the play, Stewart could easily have veered into advocating a particular conclusion or lesson, but the play remains too sensitive and nuanced to be reduced to simple morals. Although there seems to be a clear lesson to apply to the CES view of our history when Julia, David’s brother, says near the end of the play that “David did not lose his sanity because he was told the truth in the end, David lost his sanity because he was not told the truth from the beginning,” the play doesn’t end on that potentially didactic note. It continues on until the final scene where David and his family sing together a hymn he had written for the RLDS hymnal. Which is one of the most interesting things to me about the play: it only succeeds in so accurately reflecting a Mormon sensibility by having the main characters all view Mormonism (as we know it today) from the outside. As “the Brighamites”. Stewart succeeds in capturing the historical Mormon sense of longing and exile even in a play about our own history.

At first glance, Swallow the Sun isn’t as overtly Mormon because neither Mormons nor Mormonism make any appearance at all. On the other hand, it centers on the life and conversion of C. S. Lewis, and if Mormons had patron saints, he’d be one. But, as with the first play, it’s not the content but how it is viewed that struck me as powerfully Mormon. For me, the most powerful scene in Swallow the Sun is when John “Doc” Askins suffers an apparent mental breakdown. During this scene Doc raves:

Children, the lot of you. The incense of this world has you so drugged that you can’t even see the shadows on the wall. You can’t see the creatures just waiting to prey upon our souls and feast upon us, if we don’t cannibalize each other first! Screwed to the wall, each of us–taped and bound.

Two things give this scene it’s powerful impact. The first is the clear overtones of the supernatural in a play otherwise studiously devoid of anything conventional spiritual or otherwordly. Despite being a conversion story, it tends towards the intersection of the intellect and the spirit rather than a repetition of the conventional Mormon narrative of personal conversion through warm feelings about historical propositions. The second, of course, is that the audience knows more about Doc’s raving than any of the characters do: “screwed to the wall, each of us–taped and bound.”

In this play as in The Fading Flower, a lot of the pivotal details are drawn from actual history. Just as I knew nothing about the life of David Smith, I had never heard of C. S. Lewis’s friend, Doc. But Doc, his obsession with the occult, his subsequent mental breakdowns, and their impact on C. S. Lewis are all factual.

In any case, this passage also struck me as distinctly Mormon as it reflects the pressures we feel living in an increasingly secular world and yet so temporally proximate to supernatural historical claims. Christians and Jews have had 2,000 years to mythologize burning bushes and the Resurrection, but Mormons have had less than two centuries to culturally metabolize our angels and gold plates. In addition, any supernatural claims at all are much more discordant in the 21st century than in the 1st. This leaves us as Mormons, like the reader, uncomfortably incapable of writing off the deeper meaning of what others may dismiss out of hand. Like the audience of Swallow the Sun: we see too much. 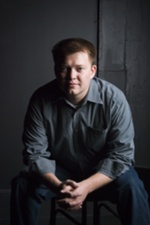 Of course I have been clumsy in the sweeping use of the term “Mormon” throughout this review. There are many, many different kinds of Mormons from a wide variety of backgrounds and living in many different cultures and situations. I should be more careful, and say that I personally felt that these plays spoke deeply to me as the kind of Mormon who inhabits a largely secular world (both by trade and because I live outside of Utah) and views my own faith through the lens of the perpetual tensions this exacerbates: tensions between secular and sacred, insider and exile, spiritual and intellectual, narrative and history. I think that I am far from alone in that category, however, and that there will be many more people for whom these plays will resonate deeply.

In this review I have also chosen to focus narrowly on two specific elements (one from each play) that stood out to me as representative of the kind of analysis that these plays lend themselves to. That I can delve this deeply is, in my mind, a testament that that the source material has real substance. That I wanted to do so in the first place, on the other hand, is a testament to the Stewart’s craft and artistry as a playwright. I look forward to more from Stewart in the years to come.

(Note: I received a review copy of The Fading Flower and Swallow the Sun.)

20 comments for “Review: The Fading Flower & Swallow the Sun”