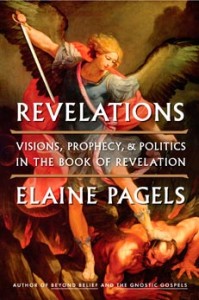 My previous post on the upcoming BYU New Testament Commentary series was so well received I have decided to do some follow-up posts discussing individual books. I’ll start with Revelation, partly because that will be the first volume in the BYU series but also because I happen to have a copy of Elaine Pagels’ Revelations: Visions, Prophecy, & Politics in the Book of Revelation sitting on my desk for one more week. While a fairly informed reader of the New Testament, I’m no scholar and navigate Greek only with the help of a good interlinear New Testament and various supplements, so my discussion is mainly drawn from the secondary literature and the English text I read in the New Revised Standard Version (NRSV), the New International Version (NIV), and of course the trusty King James Version (KJV). But that’s enough to author helpful blog posts. Enough throat clearing: So who wrote Revelation, what is it talking about, and why is it included in the New Testament rather than just buried at Nag Hammadi along with other early Christian apocalyptic literature?

Too much ink is spilled on the question of authorship, whether of Revelation or of any other New Testament book. Even if Paul didn’t write Ephesians, no one disputes that it is authentic early Christian literature. Whether it was written in the 60s by Paul or in the 90s by one of his followers is not a critical question for most readers of the New Testament. But authorship does speak to context and audience, important considerations for determining what the author intended the text to say, what the intended audience likely understood, and what we as modern readers might legitimately draw from the text.

I won’t rehash the discussion on the authorship of Revelation from the previous post and comments except to note a few helpful points.

So what was John (however identified) talking about? The text itself describes the content of the book as follows: “The revelation of Jesus Christ, which God gave him to show his servants what must soon take place ….” (1:1 NRSV; emphasis added). That lends support to those who view the visions described in chapters 4 through 22 as relating to events of John’s own day rather than to events two thousand years later, as many modern readers seem to assume without much reflection. And that is assuming that the sometimes bizarre symbols presented in dreams or visions (the two are equated at 1 Nephi 8:2) necessarily correspond to real-world events. Here’s what BYU professor Richard Draper says in his article “The Apocalyptic Witness of the Messiah“:


The book of Revelation is not easy reading. … Anyone who has spent time trying to decode John’s message knows the difficulties involved in extracting its meaning. One major problem is that some passages can be understood on more than one level or in more than one way.

So I think it is wrong to approach the visions in Revelation with the idea that there is a single interpretation of a given passage or that such an interpretation need be literal. In fact, D&C 77 makes it quite clear most of the symbols used are figurative, not literal. Matching these sorts of general figures and symbols with specific events of past, present, or future is the kind of speculative exercise LDS General Authorities generally avoid these days. That seems like an example worth following.

Here’s an alternative approach: ignore the visions. Focus on a few encouraging items that we can draw from the text without playing a Mormon version of Left Behind.

Elaine Pagels gives helpful historical context to Revelation in her book. What started out as a book about Christians resisting Roman power was, in later centuries, read by warring Christians as a book about resisting other (heretical) Christians. That shifting interpretation and its utility in sectarian conflict helps explain why Revelation (in contrast to other Christian apocalyptic) ended up being canonized.

Pagels also suggests that what John was arguing against in his seven letters to the churches is largely what Paul was arguing for in his letters: a relaxed approach to the law, at least for Gentile converts but carrying over in places to Jewish Christians. John will have none of that: “I will make those of the synagogue of Satan who say that they are Jews and are not, but are lying — I will make them come and bow down before your feet” (3:9 NRSV). Pagels’ view is in line with Bart Ehrman’s views about radical diversity in early Christianity.

Most helpful, though, is her chapter summarizing some of the noncanonical Christian apocalyptic texts found at Nag Hammadi. The book of Revelation is not, after all, unique: many Christian writers used that style of expressing their particular Christian message. Revelation is only unique in being canonized (although Mark 13 has apocalyptic elements, as does Isaiah 24, Daniel, and parts of Zechariah in the Old Testament). But Nag Hammadi delivers self-contained Christian apocalyptic more or less contemporary with Revelation. What constitutes apocalyptic is somewhat broader than one might think. One scholar she quotes defines it as “the revelation of divine mysteries through … visions, dreams, and other paranormal states of consciousness.” Sounds like revelation as defined in Mormonism.

She discusses the Apocryphon of James, the Apocryphon of John, the Revelation of Zostrianos, the Revelation of Peter, the Gospel of Thomas, the Gospel of Philip, and several other books discovered at Nag Hammadi. (I wonder if she has read the Apocalypse of Nephi at 1 Nephi 14-17?) I’ve got a decaying copy of James Robinson’s The Nag Hammadi Library on my shelf. It takes some dedication to get through most of the books, but the exercise does give one a different perspective on Revelation and, more generally, on revelation as exemplified in those texts.

As I’ve tried to show above, an LDS reading of Revelation brings up topics that are familiar to Latter-day Saints and that sometimes have surprising parallels in LDS scripture: visions of Christ, theosis, cosmic re-creation. Revelation’s dialogue between John and angelic interlocutors (like Nephi’s similar conversation) is not as unique as we once thought. If we can avoid getting hung up on the LDS identification of John of Patmos with John the Apostle and bracket the Evangelical fascination with the Rapture (which doesn’t actually figure in Revelation), the book has a lot to offer the LDS reader.

← Literary DCGD #20: From The Arcana of the Infinite
Review: The Fading Flower & Swallow the Sun →