Secularism is a new religion that threatens to overwhelm traditional faiths in much the same way that Christianity and Manichaeism swept away traditional local cults almost two thousand years ago. Mormonism is far from immune to this process, but it is particularly well-suited (theologically) to adapt (culturally) and remain relevant and vibrant. If changes are made. The ship must be turned to face the wave head-on. 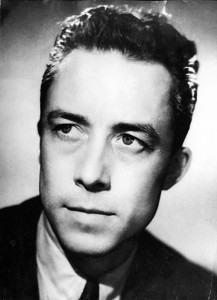 First, however, I want to specify that it is not secularism per se with which I have a bone to pick, but a specific subgroup: the New Atheists or New Skeptics (the term “scientism” also applies). I don’t think anyone can read Camus’ The Plague (just as a personal example) and think that atheism, broadly construed, is unreasonable or unlovely. I believe that there are good reasons to disbelieve and good reasons to believe, and also that atheists and theists can be unified on every fundamental value. Matters of fact do not divide true friends.

What provokes a reaction from me is not that some people do not believe that God exists or believe that God does not exist, but rather that some people claim that it is unreasonable for anyone to believe. It is that claim which draws my attention without any suggestion that atheists (disbelievers or nonbelievers) lack for integrity, intellect, charity, or any other virtue.

Now, onto my argument. Without providing a comprehensive or precise definition of religion, I’d like to observe that it has enjoyed a prominent place near the top of the social pyramid throughout human history and across human cultures. Standard economic theory can explain why the agrarian labors were at the bottom and the land owners were at the top, but the ubiquity of religion requires explanation. To put it crassly: what were they selling?

I don’t buy that it was comfort in the face of angst because religion has so little capacity to deliver any real relief from fear of death. One may as well suppose that religion was socially powerful based on its ability to supply miracles. Clearly religious leaders have been petitioned throughout human history, but this is how religions cash out on social capital, not how it is built up.

I’m equally skeptical of the notion that religions got powerful because they told the rich what they wanted to hear. This is incompatible with the teachings of all major world religions which invariably emphasize a universal need for virtue, restraint, and sacrifice. While it’s obvious that religion has been used to appease the rich or buttress the powerful elite, practices like the sale of indulgences have existed at the periphery of religion relative to teachings (however frequently ignored) about equality and justice. If religion was a collection of convenient fictions, their places would be reversed. This is, once more, an example of trading in rather then building up religion’s social stock.

Religion thrived for two reasons. The first is that while there isn’t a deep human need to know what happened before birth or will happen after death, there is a far more pressing need to understand what is happening right now (whenever now is). To the extent that we think about theology at all, it is first to dwell on questions of finding meaning today, of reconciling the conflict  between our ordered self-narratives and the chaos around us today, and of finding solace for an intangible but persistent ache that haunts us today. The need is real, it is universal (in culture if not in individual), and it is more pressing than curiosity. 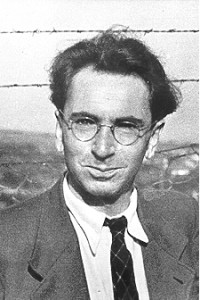 Ultimately, man should not ask what the meaning of his life is, but rather must recognize that it is he who is asked. In a word, each man is questioned by life; and he can only answer to life by answering for his own life; to life he can only respond by being responsible.

Which do you think has historically done better business?

The story of religion, in a very small nutshell, is that people have very hard questions and religion at first offered to help us answer them for ourselves. But then an impostor arose that offered to help us cheat, to sell the answers that could only be earned through precious tears for a few measly coins instead.

Thence derives the social power of religion, for you see, once someone has agreed to sell themselves for naught they are in the position of wearing the emperor’s new clothes.It is now in their best interest to protect and validate the authority of religion lest, in questioning it, they devalue the goods they have purchased. I don’t believe that the ancients were credulous fools who sought advice and blessing from impotent charlatans because they lacked the keen and penetrating intellect of a modern to discern whether or not someone did what they promised to do. I believe that (fake) religion has persisted despite its failure to deliver consistently because all who have invested must be complicit in the cover up.

And now that torch has been passed.

The connection between the previous discussion and secularism is simply this: none of my story relies on myths, the supernatural, or anything traditionally associated with the appearance of religion. I have redefined religion in such a way that (apparently) purely secular institutions or philosophies can perform the same social role and preserve the exact social dynamic. And so, these days, that is precisely what occurs. When I speak of modern secularism as a new religion I am not being metaphorical. I am being literal. (Although, once more, “modern secularism” refers to a particular subset of secularism broadly defined.)

One prominent and oft-cited example of this is the secular religion of environmentalism. The degree to which the green movement recapitulates all the high notes of Christianity is so brazen that it is ripe for parody. We all existed in a state of natural bliss and union with nature until the serpent of modern technology entered and we partook of the forbidden fruit of industrialization, thus causing us to be expelled from Eden and subjected to a barrage of artificial (cancer-inducing!) chemicals. Now all our children have autism from vaccines as the world labors under the weight of collective guilt. We are held, sinners in the hands of an angry Nature, over the fire of catastrophic global warming where repentance (carbon offsets) cannot purchase our freedom, but is due nonetheless. It’s basically Christianity without Christ. 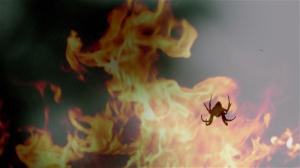 “The God that holds you over the pit of hell, much as one holds a spider or some loathsome insect over the fire, abhors you, and is dreadfully provoked.” – Jonathan Edwards (or Al Gore)

Please note that none of this discussion calls into question the science of anthropic global climate change. I’m merely pointing out that that issue has social weight not because of the science (practically no one understands complex climate models), but because of the narrative. We are disaffected. As Louis CK puts it: “Everything is amazing; no one is happy.” Something is missing, and we need a narrative to plug the hole. Environmentalism fits the profile. Whether or not it is factually true is beside the point.

This has been noted before, but what has been missed is that this is not just a new veneer for Christianity. It’s an example of the extent to which religion (properly defined) is deeply and completely compatible with scientific rhetoric. 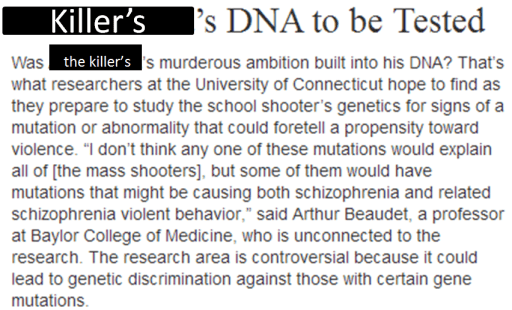 Redacted because I don’t feel like giving the killer more notoriety.

Another stark example of this was evidenced following the tragic Sandy Hook massacre. In the old days, we would have turned to religion to assuage our grief and pain and give us some explanation, but in the 21st century newspapers made sure to cover extensively the fact that the killer’s DNA would be studied. Scientifically this is meaningless. It’s as relevant as reading entrails or casting bones, and that’s precisely the point: science is increasingly being cast to fill the role that religion once filled. As this happens, the same split is emerging between authentic science and fake science (scientisim). Authentic science, tentative, boring, and expensive, stands as much chance of remaining pure against the interloper as authentic religion did against its ancient hijacker.

In subsequent posts, I’ll predict the future of the religion of secularism and speculate on the impact I believe it is already having on Mormonism, how Mormonism can respond, and why we are especially well-equipped to do so.

68 comments for “Mormonism and the New Religion of Secularism”