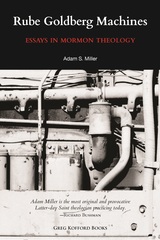 This is the second post on Adam Miller’s Rube Goldberg Machines: Essays in Mormon Theology (Greg Kofford Books, 2012; publisher’s page). In this post I’ll discuss Chapter 8, “The Gospel as an Earthen Vessel,” a suggestive symbol that Adam borrows from 2 Corinthians 4:7: “We have this treasure in earthen vessels, that the excellency of the power may be of God, and not of us.”

In line with the guidelines that Adam set forth in Chapter 6, his manifesto for Mormon theology, he opens this essay with a question that is both relevant (as opposed to trivial) and critical: Is Mormonism thinkable? In particular, is Mormonism thinkable today? By this he means not whether Mormonism can be “imagined” (plainly, it can) but whether Mormonism has “public intelligibility” and whether it “can be articulated within the horizons of contemporary thought” (p. 73). This is not so much a test being applied to Mormonism or a hurdle that Mormonism must clear to be deemed respectable. It’s more like a test being applied to the public square to assess the degree to which serious discussion of Mormonism is to be allowed or tolerated. “This is both a question about Mormonism’s potential political efficacy and a question about the possibility of Mormon theology” (p. 73).

How I Would Approach the Question

I’m a simple guy — I see the thinkability question in light of the general faith and science issue. There is a very large market for faith and science books these days. This reflects the extent to which the primary question facing religious believers, including Mormons, in the 21st century is not a choice between rival faiths or denominations, but the more general question of whether belief is still possible, still reasonable, in an age of science. Among the more notable books in this genre in recent years are Francis Collins’ The Language of God: A Scientist Presents Evidence for Belief and John Polkinghorne’s Belief in God in an Age of Science. A book that considers the specific question Adam poses in his essay but applied to Christianity rather than Mormonism is Can a Darwinian Be a Christian? by Michael Ruse, a philosopher who regularly publishes on science and biology topics. Using Adam’s terminology, we might rephrase Ruse’s question as: Is Christianity thinkable? Or: Is Christianity publicly intelligible? Likewise, we could rephrase Adam’s question in Ruse’s terms as: Can a Darwinian be a Mormon?

Ruse does not address Mormonism in his discussion, but his comments on conservative Christianity and Evangelicalism can be profitably applied to Mormonism. His chapter on naturalism really gets to the heart of the matter, what he calls “the problem of miracles.” Evolution is a theory “committed to the ubiquity of law” or a “naturalistic theory.” Christianity (and Mormonism along with it) accepts miracles in one form or another and is therefore “obviously committed to the breaking of law.” One way to reconcile the tension is to recast many miracles as not actually breaking or suspending natural laws as we understand them but as operating in accordance with natural laws. In fact, a careful reading of the biblical text itself often suggests this very approach. A second way to respond to the tension is to capitalize on it, rejecting the theological compromises of Liberal Protestants and arguing instead that true Christian belief requires a leap of faith (Kierkegaard) or a recognition that God is wholly other (Barth) and that God’s way of working in the world is simply not amenable to our critical analysis.

A third response that Ruse discusses at length is to distinguish between methodological naturalism and metaphysical naturalism, arguing that one can adopt naturalistic thinking for scientific purposes without necessarily adopting metaphysical naturalism (the denial of any supernatural events or forces) as a worldview. Purists on both sides of the debate reject what one might call this methodological compromise as unsound, but it does seem to work for a wide variety of believing scientists. Mormonism makes this sort of compromise somewhat more difficult, emphasizing as it does the supernatural elements of God’s dealings with humankind. This supernatural emphasis seems to have grown during the Correlation era of the last forty years or so. I’m tempted to describe the current official LDS approach as an extreme form of the second response, advocating not merely the necessity of faith over reasonable belief but further advocating the absurdity of objects of belief (following Tertullian), then recounting LDS history in such a way as to emphasize the most difficult or miraculous elements while ignoring the more human elements, ones which make sense in light of their social and historical context.

And what is Ruse’s conclusion? It’s one I’m happy to accept. I’ll liken it unto us a bit, substituting “Mormon” for “Christian” in this quotation:

How Adam Approaches the Question

Adam approaches the question somewhat differently. He doesn’t just argue for thinkability by showing that Mormon thinking is reasonable in relation to science and contemporary thinking, as Ruse does. Adam begins by asserting that two factors dominate the shape of our public space, science and capital, then draws out three conditions that shape the public intelligibility discussion: materiality, temporality, and universality. He makes a key claim: “Mormonism must have traction in the world without being reducible to the world” (p. 74). He relates that point to the title of the essay: “To borrow Paul’s language from 2 Corinthians 4:7, we need a way of addressing Mormonism as an ‘earthen vessel’ whose strength does not depend on our ability to imaginatively invoke a supernatural transcendence” (p. 74). To accomplish that, Adam calls on the concept of “the event” as discussed in contemporary French philosophy, where an “event” is defined as both immanent (tied to worldly events) but also transcendent (it can “reconfigure the horizons of the situation to which it belongs”). Adam then proceeds to discuss Mormonism as an immanently transcendent event using the three conditions noted earlier: materiality, temporality, and universality.

As summaries go, that might leave you shaking your head. Adam’s writing is both dense and terse. You can’t summarize it as much as unpack it, so it takes about three paragraphs to properly “summarize” one of Adam’s paragraphs. Here’s his comment on materiality as a condition of public intelligibility:


For us, science sets the stage of being. Though such a material ontology should not be conceived in a way that is narrowly positivistic, its content must be thoroughly immanent. The result is that neither metaphysical speculation nor appeals to anything supernaturally transcendent remain publicly intelligible. (p. 75)

I think it is fair to say that most LDS-generated public discussion or explanation of Mormonism relies heavily on appeals to the supernatural and metaphysical speculation. Adam is quietly suggesting that approach is completely unsuited to the pressing task of establishing the public intelligibility of Mormonism.

Here’s how he introduces the condition of temporality:


Thought’s contemporary configuration is profoundly temporal. Our world is thinkable only within the frame of historical transformation. This historical consciousness, ramified by our growing awareness of the deep time needed for cosmic expansion and evolutionary biology, solidifies the necessity of thought’s temporal conditioning. (p. 77)

In the context of history, an “event” as discussed earlier is “a recovery of lost possibilities and forgotten relics that interrupts time’s homogeneous flow. As a result of this recovery, an event can momentarily shock time and arrest the chain of causality, making room for something new. In this sense, an event is an immanent irruption of the eternal in time” (p. 78). Think of the complaint in Ecclesiastes that there is nothing new under the sun. An event introduces novelty, something new under the sun, into the stream of historical events. The resurrection of Jesus Christ is such an event. Adam spends a couple of paragraphs depicting the Book of Mormon as such an event. “The recovery and inclusion of its lost possibilities can shatter the hegemony of actualized history. The past, weighty as it is, need not remain as it was” (p. 78-79).

The discussion of universality gets deep. Universality is an epistemological claim. Adam distinguishes knowledge from truth, truth being a much more circumscribed concept. “Truths, then, insofar as they are distinguished from knowledge, are relatively rare phenomena” (p. 84). Oh, I like that. We tend to cheapen truth by overuse in daily discourse. He amplifies:


Truth is not hermeneutic, nor is it contextual. It is universal precisely because it is not bound to any interpretive context. … Truth is what traverses and restructures those interpretive horizons. (p. 80)

Adam then goes on to discuss his view of Mormonism as an immanent event. It is a “re-inauguration of the gospel-event” (Christ’s resurrection and its announcement) accomplished “primarily through the Book of Mormon’s uncompromising declaration of hope in Christ” (p. 83). He goes on to depict the uniquely Mormon event: “Mormonism is an original inflection of the event of Christ’s love into a profoundly new figure of the family” (p. 85). You’ll have to read his detailed explanation of that claim yourself. He answers his original question (Is Mormonism thinkable?) with a strong yes; Mormonism “may be more intelligible than at any previous point in time” (p. 87). To further that project of establishing public intelligibility, Mormonism must “render itself sufficiently generic for the entire world to be transformed by it” (p. 87). If generic sounds too bland for you, try “universal” instead.

The problem with the general faith and science approach (covered in the first section) is that it just isn’t enough to show that Mormonism is, by the lights of science or philosophy, reasonable. To argue that Mormonism is a better church the way you might argue for a better movie or a better mousetrap is not, I think, a big enough argument for the matter at hand. Adam’s argument for Mormonism as an immanently transcendent event with the conditions of materiality, temporality, and universality is certainly not a simple or straightforward argument, and I don’t claim to grasp it in all its particulars. But it has the right scope and form. If you are at all concerned with the question of how we should go about explaining Mormonism to the world, you should read the complete essay.

← Guest Post: Mental Health, Mortal Life, and Accountability Part 3: Fractured Images of God, Self, and Others
Literacy and orality in Mormonism →

7 comments for “Mormonism: How Thinkable Is It?”