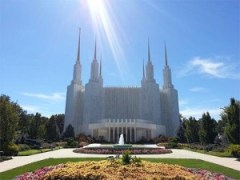 (Assuming, of course, that Maria is a full-time ordinance worker at the Washington, D.C., temple.1)

The Church bought the 44-unit apartment complex sometime in the 1970s, after the Washington, D.C., temple was built. The apartment building is about a mile from the temple, and the Church rents apartments to ordinance workers at below-market prices.2

In 1980, the Church convinced3 the Property Tax Assessment Appeals Board to grant it a property tax exemption on the apartment building. The Board believed that the the apartments were used to foster a religious purpose, and the rents were low enough to be considered a subsidy, not unlike the subsidy involved in convents and parsonages.

In 2008, in the course of a periodic review of exempt properties, the Supervisor of Assessments informed the Church that the apartment complex shouldn’t be exempt from the property tax. This time, on appeal to the Board, the Board agreed that the apartment complex didn’t qualify for an exemption. On appeal, the Circuit Court reversed, and the Supervisor appealed that court’s decision.

Like other states, Maryland imposes a property tax. But the property tax has a number of exemptions, including an exemption for certain property owned by religious groups. To qualify for this exemption, the property must be used exclusively for (a) public religious worship, (b) a parsonage or convent, or (c) educational purposes.4

The Church appealed the Board’s decision to the Court of Appeals of Maryland (which is the highest state court in Maryland). The court, in Green v. Church of Jesus Christ of Latter-day Saints, spends no time on the apartment complex’s use for public religious worship or educational purposes (and the Church doesn’t push those, either). Clearly, if the apartment complex is going to qualify for a property tax exemption, it must be because it is a parsonage or convent.

There’s a certain amount of pressure on these definitions. The property tax law requires exemptions to the property tax to be “strictly construed.”5 Strict construction means that the interpretation of the law “considers only the literal words of a writing.”6 So not only does the apartment building have to be a convent, but it has to literally be a convent.

In the end, though it recognizes its obligation to strictly construe the statute, the court admits to taking a common-sense approach to religious property tax exemptions to arrive at fair decisions. As such, it rejects the idea that a convent houses unmarried individuals who have taken lifelong vows of poverty, chastity, and obedience to a superior. Such a definition, the court says, is in line only with certain religious traditions.

The court decides, instead, that a religiously-owned housing complex must have several basic qualities to be eligible for the property tax exemption as a convent. It must consist of a community of people who

Ultimately, I think the court came to the correct conclusion.7 Where a legislature writes a tax law using language applicable to specific religions, an expansive reading is better (and, probably, more constitutionally permitted) than a narrow reading. In the federal income tax, there’s a special tax provision that applies to housing provided to “ministers of the gospel.” That provision has been read broadly to apply to, inter alia, certain rabbis and Muslim clerics, as well. So reading “convent” into Mormon real estate is not a huge stretch, even though we don’t use that language.

So why not just exempt all church-owned real property from the property tax? A couple reasons leap to mind.

Moreover, if you had such a blanket rule, you’d lose more property tax revenue than just the occasional church-owned recreation center (or whatever). Businesses would have a huge incentive to sell their real property to a church and then lease it back. That way, they wouldn’t pay property tax (and, presumably, could deduct their rent payment). Such tax structuring could potentially decimate a state’s property tax base.

Even assuming you don’t have such structuring, though, it’s not just government (and those—meaning all of us—who receive benefits from government) that would be hurt. Imagine, for example, that a church-owned Deseret Book went in down the street from the temple. If it didn’t have to pay property tax on the land on which it sat, its expenses would be lower. With lower expenses, it could easily undercut the prices at, for example, This Is the Place Bookstore.

Which is to say, there are good reasons to limit the scope of the property tax exemption for church-owned property.

← How a concussion made me think of Stephenie Meyer and Francis Hutcheson
Quirky Questions in Mormon Theology: Can there be an odd number of people in Heaven? →

19 comments for “How Do You Solve a Problem Like Maria?”