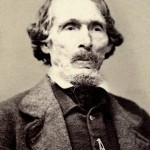 In the middle of his visit to the Nephites, Christ leaves the people for the night and then returns the following day (as recounted in 3 Nephi 17-19). Before he leaves, and then again after he returns the next day, Christ teaches the Nephites about prayer, and provides them with examples of prayers—one of which they were unable to even record.

These prayers call to mind the model prayer that Jesus provided in the New Testament, the Lord’s Prayer, itself used as an oft-repeated prayer throughout Christendom and the inspiration for many pieces of poetry, including the following by W. W. Phelps:

Our Father in heaven

Be hallowed thy name,

Thy will be our aim.

O give us bread daily;

Forgive us our sin

As we forgive debtors

Of all that have been.

Lead not to temptation—

For thine is the kingdom

And thine is the power,

While time1 shall reign—

And thine is the glory

I wouldn’t say that this adds anything new to the Lord’s Prayer, but it is, I think, a nice presentation, one that perhaps adds something musical to what the King James’ Version’s translators gave us. And, if nothing else, it shows the creative urge of Mormon artists in Joseph Smith’s day. In particular, Phelps, who regularly took the texts of others and turned them in his own poetic vein — kind of like today’s mash ups.

← Romney’s Tax Highlights
The blood of Israel in Europe →