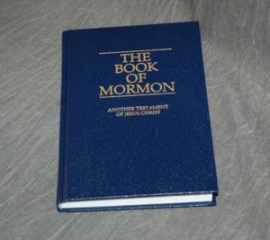 We’ve arrived in early Alma, and so, as I did for my BYU New Testament class I taught, I provide here some questions taken from the midterms and finals of the two Book of Mormon classes I taught in 2004 and 2006. Both sections covered 1 Nephi-Alma 29, but one was a freshman section and one an RM section. These exams were open-scripture, but as with the New Testament exam, open scripture certainly did not equate to easy. I wanted to test if students were reading, thinking, and able to make use of the critical-thinking and other skills we were learning in class and homework assignments. Sometimes I just wanted to see if students could read closely and think coherently. How do YOU do on these?

2 a) How do we know that when Jacob and Joseph were ordained “priests and teachers” they were not being ordained to our Latter-day priesthood offices of priest and teacher?

2 b) Why then are they called teachers? (Handout, discussed in class. 4 pts.)

3) Explain two principles or reasons we can allow and account for the scriptures to contain errors. (Discussed in class several times, from several perspectives. 4 pts.)

4) Nephi says that we are “saved by grace after all that we can do.” What else does the Book of Mormon say that clarifies what this means? (class discussion, 3 pts.)

5) The 1830 edition of the Book of Mormon differs significantly from our 1981 version in its arrangement. Indicate which things were part of the 1830 edition (and thus presumably on the plates themselves) by crossing out those things that were not in the 1830 edition. Example- (3 pts.)

6) Generally speaking, who was responsible for the spelling, punctuation, and capitalization of the 1830 edition of the Book of Mormon? (1 pt.)

a) God, who wrote the whole thing.
b) Joseph Smith.
c) The printer Egbert B. Grandin and his assistants. [ Egbert’s parents weren’t terribly kind with that name. I supposed he could have gone by his middle name, Bratt. Lose-lose.]
d) Obadiah Dogberry
e) Oliver Cowdery

7) Joseph Smith translated the Book of Mormon by means of:

8) The New Testament tells us to “earnestly contend for the faith” (Jude 1:3) while the Book of Mormon tells us that “he that hath the spirit of contention is not of [God], but is of the devil, who is the father of contention, and he stirreth up the hearts of men to contend with anger, one with another.” (3 Nephi 11:29) How would you resolve this apparent contradiction? (Class discussion, handout, assignment. 4 pts.)

[I kid you not, I once had this pointed out to me as one of the stronger contradictions between the Bible and the Book of Mormon, thereby proving the Book of Mormon false. I asked this as the alternate, on a different exam. “The Book of Mormon mentions “wonderful contentions” (Alma 2:5). Explain what specific steps you would take to find out what is probably meant by this phrase, and make a suggestion as to its meaning.”]

9) Discuss both the original historical context and secondary fulfillment of 2 Nephi 17 (Isaiah 7), using names and dates where possible. Use the back if necessary. (Handout, discussed in class, reading assignment. 6 pts.)

12) Extra Credit question: Six women in the Book of Mormon are mentioned by name (i.e. “daughter of Jared” doesn’t count.) Without using your scriptures at all, name the four other than Sariah and Eve. (1/2 pt each)

14) Does the Book of Mormon contain democratic elections with each person voting? Briefly explain your answer. (3 pts)

15) I am receiving money to teach the Gospel. LDS apostles also receive money for preaching the gospel. Given Nephi’s definition of priestcraft in 2 Nephi 26:29 [“priestcrafts are that men preach and set themselves up for a light unto the world, that they may get gain and praise of the world; but they seek not the welfare of Zion.“], how do you judge if someone is practicing priestcraft? On what basis do you know *I* am not practicing priestcraft? (class discussion, 3 pts)

17)People of Alma vs. people of Zeniff. If there is no explicit doctrine in these passages except for that preached by Abinadi, why does Mormon take up valuable plate space to tell us these two stories? In other words, what purpose does Mormon have in relating them to us and what does he want us to get out of them? (class discussion, 4 pts) [Alternate phrasing- “How are the stories of the deliverance of Limhi’s people and Alma’s people similar and different? What purpose can these stories serve if the only “doctrine” in these chapters is in Abinadi’s speech to the wicked priests?”]

18) On the back of this paper, provide a brief outline of 2 Nephi.

19) Who took a transliteration of Book of Mormon characters to see Charles Anthon?

20) Who helped Joseph translate early on, and switched a rock for the seer stone when Joseph wasn’t looking, to test him?

21) Who “borrowed” the 116 first pages and consequently lost them?

22) Who mortgaged (and then mostly lost) his home and farm for $3,000 to pay for the publication of the Book of Mormon?

23) Relative to when Lehi and his family left Jerusalem, when did Nephi begin to write the large plates? The small plates? If God wanted a record kept, why didn’t he command Nephi to start writing immediately when they left?

24) Briefly explain the context (Israelite history, political/religious setting, etc.) of 1st Nephi 1. In other words, give the Near Eastern historical background of the Book of Mormon, using names and dates, as specifically as you can.

25) What three things did Nephi do that resulted in his vision? How do Nephi’s vision and Lehi’s dream differ? Are those differences significant? Why or why not?

26) Context is the source we should look for if we want to understand the cause-and- effect of events and discourses in the scriptures. Joseph Smith said “I have a key by which I understand the scriptures. I enquire, what was the question which drew out the answer… To ascertain [a parable’s] meaning, we must dig up the root and ascertain what it was that drew the saying out of Jesus.” TPJS, 253.

a)What triggers Jacob recounting the Allegory of the olive tree? Is it just spontaneous, or is he trying to answer a specific question or need? If so, what is it? (3 points)

b) What two specific things probably influence Mosiah’s decision to change the government from Kingship to a judge system? (4)

27) Joseph Smith, responding to the question “What are the fundamental principles of your religion,” replied, “The fundamental principles of our religion are the testimony of the apostles and prophets, concerning Jesus Christ, that he died, was buried, and rose again the third day, and ascended into heaven; and all other things which pertain to our religion are only appendages to it.” (TPJS, 272) In the Book of Mormon, we find two compact yet fairly complete historical summaries of Jesus’ life and mission. Where are they located (2 points each), and what are their major points? (3)

29) We’ve talked in class of inerrancy. Here are several brief quotes from letters to the editor of Biblical Archaeology Review. “The Bible is the Word of God, infallible and inerrant. That means, it cannot be wrong!” “The Bible claims to be God’s word. The Book of Joshua is written as an historical account….if the account of Ai [in Joshua 7-8] is not just as the Bible says it was, then the writer of the Book of Joshua was misleading, deceptive and void of any inspiration from God.” “Archaeology cannot claim inerrancy and infallibility for itself. Therefore, when there is any doubt, or difficulty, it is with archaeology, not with the Bible. Many years ago, I was told that if there was something I didn’t understand in the Bible, or something I didn’t agree with, the problem was with me, not with the Bible. I thought that was good advice at the time, and I still believe it is. God says it, that settles it, I believe it!” Do the scriptures or their authors claim inerrancy? (cite references for or against, if you can. 3 points)

30) Mosiah 21:28 originally read “Benjamin” for “Mosiah.” However, King Benjamin should be well dead by this time. Orson Scott Card argues that the people of Zarahemla did not come from the Near East, but that Zarahemla, following Mesoamerican tradition, created his fictional Jerusalem ancestors so that he, Zarahemla, could be king. [Link to that paper and the use to which I put it in class here.]

(a) Assuming for the sake of this question that Card is correct, how do those two things affect the historicity of the Book of Mormon?

(c) How much can be historically inaccurate before we start running into problems? Discuss these three questions, in light of the quotations above and LDS teachings on historicity and inerrancy. (9)

31) How do notions of inerrancy affect our LDS perceptions of “doctrine” and “prophets”? (3) Put specifically, Abinadi’s speech in Mosiah 15:1-5 is difficult (but not impossible) to square with our understanding of the Godhead. Is it possible that Abinadi simply had a lesser understanding than we do today? If so, why, and if not, why not? (3) (This is a question about assumptions.) According to Robert Millet and President Reuben J. Clark, is everything any General Authority or scriptural figure ever says automatically Church Doctrine? Why not? (3) How do we know if someone has been inspired in their comments, according to President Clark? (2) Slightly broader, what epistemological systems (from Elder Lund’s article) do we use when evaluating if something is either true or doctrinal or both? (4)

Extra credit [Generally not worth very many points, and drawn from readings or class discussion, but a level of detail or importance beyond what I reasonably expected students to remember.]

What does the Greek word translated as “gospel” in the New Testament mean? (1 pt)

What church in particular is NOT the Church of the Devil? (1 pt)

What was the topic of Elder Holland’s MA thesis at BYU?

Laman and Lemuel had historical precedent for believing that Jerusalem could not be destroyed. Explain what it was, and cite references, if possible.

In the assigned reading on Gospel scholarship, John Welch [“Towards Becoming a Gospel Scholar” ] listed several resources and journals that a “gospel scholar” should use regularly. Name 4 (excluding the Ensign.)

What is the Hebrew equivalent of “Jesus the Christ” and what do they mean in Hebrew?

Name the Babylonian king who sacked Jerusalem after Lehi and his family left.

What was Elder James E. Talmage by profession?

The Book of Mormon uses the terms Lamanite/Nephite in various ways OTHER than strict genealogical descent or lineage. What are some of them? Cite references where possible (2 points each).

How does Abinadi’s preaching eventually cause the conflict in the “War Chapters” of Alma?

What does Jershon probably mean in Hebrew, and why is that significant? (3)

Have you done any good in the world today? Explain. (3)

20 comments for “Book of Mormon Midterm”