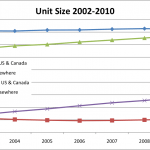 Over the past few years I’ve put together an analysis of the cumulative information in the Church’s statistical reports. Three years ago I posted The Implied Statistical Report, 2008, and last year I titled my analysis The Implied Statistical Report, 2010. Over this time I’ve tried to improve my methods and the data available, collecting data from a few different sources. This year I’ve again looked at the data and discovered something unexpected: The Church’s real growth is actually faster in the U.S. and Canada than it is in the rest of the world.

As in past years, I’ve compiled some of the data and made many comparisons in a spreadsheet on Google Docs. That spreadsheet includes church-wide information reported since 1973, along with a number of calculations that I’ve made based on the data. Those who are likewise interested in these statistics are welcome to look at it—and anyone wishing to  help maintain, update and improve both the data an the analysis can drop me a message (at Kent [at] timesandseasons [dot] org), and I’ll allow them access to modify the spreadsheet. I also have additional data that looks at regions around the world, and I’m reporting on some of that data for the first time this year.

Here is what I found interesting this year:

The average number of members per ward/branch is basically the same in the U.S. and Canada as it was nearly a decade ago, but outside the U.S. and Canada, the number has grown dramatically. To me this means that the change in activity rates happening in the Church isn’t due to any drop off in how faithful member of the Church in the U.S. are — instead it is due to the difficulties retaining members elsewhere. [I now feel justified in my skepticism of claims that significant numbers of Church members in the U.S. are becoming less active — if the numbers were truly significant, the average number of members per ward would rise over the long run. The increase in inactivity appears to be all outside of the U.S. and Canada.]

In contrast, the growth rate in baptized members outside the U.S. and Canada is double that of members in these two countries. Why? I don’t think it is about missionary work — I suspect that missionary work is done the same whether in the U.S. and Canada or not. More likely, the reason lies with the many social and cultural factors that help people stay in the Church. Elsewhere, these factors are still developing, and are often not there when they are needed.

At least, that’s my theory for why. What’s yours?

30 comments for “The Implied Statistical Report 2011”