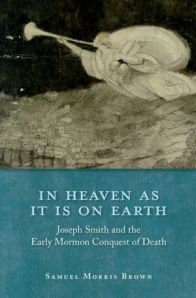 I recently finished reading Samuel Brown’s In Heaven as It Is on Earth: Joseph Smith and the Early Mormon Conquest of Death (Oxford University Press, 2012; publisher’s page). It’s an impressive book, although I disagree with the implicit argument of the book that the esoteric branch of Joseph Smith’s eclectic and diverse theology is central to his thinking and, by extension, should be central to present-day Mormonism. It is a book anyone interested in Mormon Studies should read (twice), but probably not the first or even second book on Joseph Smith that a practicing Mormon should read.

The book is dense enough that only a long and thorough review can do it justice. I consider this post to be a discussion of some interesting points raised by the book rather than a full or even a short review. I won’t even attempt a summary of the book (the table of contents and the description of the book from the dust jacket are available at the linked publisher’s page). This paragraph from the Introduction (p. 8) gives something like an overview and also a taste of the author’s approach:


After the Book of Mormon emerged as a distinctive grave artifact in the late 1820s, Joseph Smith continued to explore relics and rituals central to the problem of death. In the late 1830s, after moving to Ohio, Smith acquired and interpreted Egyptian mummies and their funerary papyri. Finally arriving in Illinois, where he founded a biblical-sounding utopia called Nauvoo, Smith elaborated his religious vision, encompassing an afterlife theology that could vanquish death, ensure permanent personal election, and maintain the human family intact forever in a sacerdotal structure. To this end, Smith drew on, adapted, and reformulated rites and doctrines from sources inside and outside normative Protestantism, yielding an intensely biblical system that combined elements of the Radical Reformation, Western esotericism, and Christian perfectionism. By the time of his death, Smith had revealed a polyvalent family system, a utopian communitarianism grounded in mystical traditions about Enoch, a temple liturgy that taught his followers how to negotiate the afterlife and promised them postmortal divinity, and a scandalously anthropomorphic God whom all humans could call Father. These surprisingly varied themes and innovations of early Mormonism find coherence in Smith’s encounters with, and attempted conquest of, death.

In the book’s favor, it does a better job of relating and synthesizing this material than prior book-length attempts. Brooke’s The Refiner’s Fire went too far afield and did not make the case for causal connections between the hermetic material he reviewed and Joseph Smith. Brown stays closer to home with his material. Davies’ The Mormon Culture of Salvation has a thesis that is similar to Brown’s, but employed a variety of models from religious studies and the sociology of religion to guide the analysis. In contrast, Brown bases his discussion on a much larger set of detailed historical facts and employs no social science models (although he does cite the literature from time to time). I found Brown’s fact-based discussion more credible than Davies’ model-driven discussion. To compare favorably with both Brooke and Davies, two well-respected scholars, is certainly an admirable accomplishment.

At the same time, I have a few issues with the book. First, I’m not convinced foregrounding a “Mormon conquest of death” theme is defensible. First, there is nothing unique about the Mormon view of a “conquest of death.” Every Christian denomination takes the conquest of death as a common point of departure, rooted in the death and resurrection of Jesus Christ. It’s not like existential dread hangs over most people or other Christians until they convert to a Mormon doctrine of salvation that promises unique access to immortality and the afterlife. Even the Mormon claim of eternal families is hardly unique: while not incorporated in the formal theology of other Christian denominations, most Christians nevertheless assume their families will be around in the next life. No one thinks of heaven as a form of solitary confinement where you would be barred from contact with former family members. “[T]hat same sociality which exists among us here will exist among us there” (D&C 130:2).

More generally, there’s an odd connotation to the term “conquest of death.” It brings up images of familiar movie plots where some 19th-century eccentric is hacking his way through the African rain forest in search of the fountain of youth or the golden elixir of life. And there is a secular view, often enough reflected in media stories on religion these days, that all religious beliefs are in some sense strange, not much different from the jungle eccentric on a misguided quest for a technology of eternal life. To confirm that bias journalists are drawn to stories that accentuate strange and bizarre religious beliefs or practices. I don’t know what Brown’s own perspective is (the author reveals very little in the book), but making “the Mormon conquest of death” the central theme of the book perhaps unwittingly plays the same game, suggesting it is also the central theme of Joseph’s life and the central concern of modern Latter-day Saints. As noted in the book, Joseph lost several family members during his life, which understandably intensified his feelings on the subject (see D&C 137, for example). But the implicit suggestion that Latter-day Saints in general have a strange preoccupation with death is an idea that will not survive actual attendance at a Mormon funeral, which is more likely to give the impression that Mormons do not take the idea of death seriously enough.

Brown does attempt to define the term “conquest of death” in broader terms:


When … I refer to death “conquest,” I mean a set of approaches to the meaning of life, a framing of aspirations for the afterlife, and controversies about the security of stability of salvation, as expressed in human struggles with mortality. When and under what circumstances life ends, how much of earthly experience will persist, and what constitutes preparation for death are problems that can be distinguished from salvation per se. Framing Mormonism as an attempted conquest of death illuminates its theology and enriches the texture of the lived experience of believers. (p. 5)

I’m not sure that broad definition was really carried forward through the balance of the book. I don’t think a balanced discussion of an LDS view of the meaning of life or an LDS view of the stability of salvation would focus on the themes discussed in the book. My sense is that such a discussion would reflect what we used to call the Plan of Salvation (now known as the Plan of Happiness), essentially “salvation per se.” So my impression was that the book’s discussion of the “Mormon conquest of death” was rather narrower than the definition given by Brown implies.

So what’s the right perspective or balance for a book about Joseph Smith or early Mormonism? The topics and themes treated in Brown’s book are part of the story, of course. A very good discussion can be had over how much weight to accord those themes as opposed to others that generally get more coverage in a biography of Joseph Smith or a history of early Mormonism. I think the book would be stronger if a chapter were devoted to that discussion and an effort was made to place the themes discussed in the book within the fuller context of Joseph Smith’s life and early Mormonism.

That is a discussion that could easily apply to present-day Mormonism as well. So a case can be made that the book is more than just a discussion of (what I consider to be) marginal themes and practices in early Mormonism. Consider the rise of “temple Mormonism” in just the last generation: a vastly expanded temple construction program, coupled with a redefinition of normative Mormonism in which holding a temple recommend is now essentially a requirement of being a Mormon in good standing (rather than simply being a baptized, attending, believing member of the Church), even extending to the use of the temple recommend as a requirement for teaching at BYU or for confirming one’s son or daughter a member of the Church.

Both esoteric doctrine and temple Mormonism fall on the retrenchment side of Armand Mauss’s assimilation/retrenchment spectrum, emphasizing Mormon distinctiveness rather than community with other Christians. It may be that the direction of current LDS organizational and doctrinal change implies that the themes discussed by Brown, which I view as being largely marginal to present LDS belief and practice, are in fact becoming the new Mormon mainstream, but I hope not. I won’t give up without a fight.