I have seen several notices publicizing an upcoming conference at BYU, Exploring Mormon Conceptions of the Apostasy. Sounds interesting, particularly in light of the one-paragraph blurb stating goals for the conference, which challenges rank and file members of the Church as well as scholars to reconsider LDS views of “the Great Apostasy”:

Examining claims of historical apostasy is a pertinent task for members of The Church of Jesus Christ of Latter-day Saints. For the last hundred years, the Great Apostasy narrative has shaped Latter-day Saint historical assumptions, contributed to the construction of Latter-day Saint social and theological identity, and impacted the ability of the Church to develop ecumenical relationships. The contributors want to raise awareness about the influence of this narrative as well as to reconsider some of the assumptions made by this narrative. We hope to cultivate scholarly discourse among the contributors as well as the Latter-day Saint community about the challenges and consequences of simultaneously acknowledging complexity, causality, and providence when interpreting history for theological purposes. We hope to develop a richer understanding of the definitions, connotations, social functions, and theological implications of Latter-day Saint conceptions of the apostasy.

So let’s take that invitation at face value and begin a discussion about “claims of historical apostasy” and “some of the historical assumptions made by this narrative.” The simplest form of the narrative is that there was an original church from which something essential (doctrine, scripture, authority, priesthood, the Spirit) was lost.

Looking for the Original Church

Here’s the problem. Scholarship in the 20th century suggests that the original condition of Christianity in the decades following Christ’s death — the very beginning of the early church — was not any sort of essential unity but instead was radically diverse. In other words, there never was an early Christian Church, there were, at the very beginning, many different churches (and yes, I recognize that the term “church” is somewhat anachronistic in this early context, but that is sort of the point). Bart Ehrman makes the case for early Christian diversity in his book Lost Christianities: The Battle for Scripture and the Faiths We Never Knew (OUP, 2003). He also summarizes that view in the last lecture in After the New Testament: The Writings of the Apostolic Fathers, a Teaching Company set of CDs (hey, I drive a lot). Here are his essential points from that lecture:

The standard account of orthodoxy and heresy derives from Eusebius, the Christian historian of the early 4th century. In his victor’s version of early Christian history, everything that wasn’t proto-orthodox was heresy. The newer account rejects the validity of those labels: “orthodox” as right-thinking was evident only in retrospect. It instead stresses the initial Christian diversity that only gradually, over the course of almost three centuries, developed into a more unified Christian Church, by way of an early, slow-acting version of correlation emanating from the influential church at Rome. Ehrman identifies Walter Bauer, a 20th-century German theologian, as the scholar who first articulated this newer view, although his original arguments have been updated by more recent scholars.

An example might help illustrate the degree to which the retrospective and biased view of history can actually obscure earlier events. This is from Henry Chadwick’s classic The Early Church (Penguin Books, 1967).


The Jewish Christians, excluded by their fellow-countrymen, continued to observe sabbaths, circumcision, and other Jewish feasts. As this distressed many Gentile Christians, they became lonely, unsupported groups. … From Irenaeus onwards Jewish Christianity is treated as a deviationist sect rather than as a form of Christianity with the best claims to continuity with the practice of the primitive church at Jerusalem. The Jewish Christians called themselves Ebionites, a name derives from the Hebrew word meaning “the poor” …. Since some of them had never accepted the tradition of the virgin birth of Christ, Irenaeus classified the Ebionites with other heresies that denied this; soon Tertullian was supposing that they originated with a person named Ebion, and later anti-heretical writers even felt able to quote from Ebion’s alleged writings.

And thus we see how a strong normative view of what was supposed to have happened in the past (like the orthodoxy and heresy view of the 4th century) can create its own facts, even its own documents. 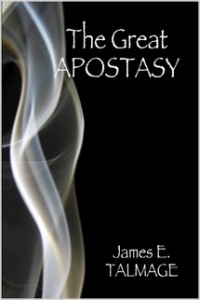 So here is a general question for the LDS view of the apostasy: How does the idea that the early church was, in fact, a variety of diverse churches with different beliefs and practices affect our view of the Great Apostasy? Rejecting the orthodoxy and heresy account and instead locating the emergence of a unified Christian Church in the later third century certainly raises new questions about what happened in the first and second centuries. Maybe the Great Apostasy wasn’t really so great.

The LDS view in the 20th century seems to be that the original church had God’s favor while the apostles were alive, but lost God’s favor when the apostles died without establishing proper successors. An alternative LDS view, sketched in 1 Nephi 13, is that the Bible (or sacred writings that preceded the Bible) once “contained the fulness of the gospel” (v. 24), but that parts of that fulness, “many parts which are plain and most precious” (v. 25, 28), were later removed.

A discussion that suggests updated LDS views is found in Early Christians in Disarray: Contemporary LDS Perspectives on the Christian Apostasy (FARMS and BYU Press, 2005). In the opening chapter, “What Went Wrong with the Early Christians,” Noel B. Reynolds notes how Hugh Nibley’s work on early Christian writings refocused LDS scholars away from the Protestant critique of the excesses of the medieval Catholic Church and towards the first centuries and even the first decades following the death of Jesus Christ. Likewise, he notes that Richard L. Bushman, in a book review published in the mid-sixties, urged LDS historians to move away from Protestant models and take a fresh view of the apostasy. Reynolds highlights the early change from covenant-making ordinances to sacraments (dispensing God’s grace) as a key development in apostasy. He lists three myths about the apostasy that are critiqued by later contributors to the volume:

Reynolds notes that “as our knowledge of these times [the first Christian centuries] grows, the apostasy is again pushed back further, even into the first century.” So here is a second and more particular question for the LDS view: How early can the apostasy be pushed back? The harder we look, the earlier it seems to get. At some point you get early enough that the evidence no longer argues for an apostasy, it argues for the failure of an original church (from which the Christianity of later decades or centuries apostatized from) to ever be established or organized. You end up, I think, with the sort of early radical diversity posited by the Bauer hypothesis and updated by Ehrman.

So that’s a discussion I would enjoy hearing at the BYU conference next month. Can the LDS view of the apostasy be reconceptualized in light of this newer view of early Christian diversity? Maybe we view the original church not as a plane that crashed after takeoff but as one that never really got off the ground. Perhaps we can view the apostasy in two complementary stages, with the original church not enjoying God’s favor because it wasn’t really a church yet (a “proto-apostasy”) and the eventual unified church of the late 3rd century not enjoying God’s favor because it had, by then, lost or changed key doctrines or practices (the fulness of the apostasy).

Any other ideas about the apostasy you’d like to hear about from LDS scholars?

← Misappropriation of email? or who owns an email list anyway?
Exploring Mormon Thought: The Apostasy and Mormon Theology →

50 comments for “The Not-So-Great Apostasy”