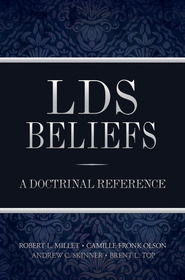 The latest book to digest Mormon doctrine for the popular LDS audience is LDS Beliefs: A Doctrinal Reference (Deseret, 2011), by four BYU religion professors: Robert L. Millet, Camille Fronk Olson, Andrew C. Skinner, and Brent L. Top. Entries are alphabetical, with authorship and cited sources listed following each and every entry. It’s out just in time for Christmas and will no doubt find its way under the tree in many LDS homes, as well it should. The best way to summarize the strengths of this one-volume reference work is to compare and contrast it with other modern attempts to summarize LDS doctrine: Bruce R. McConkie’s Mormon Doctrine, True to the Faith, and The Encyclopedia of Mormonism.

The Long Shadow of Mormon Doctrine

Everyone knows that the leading entry in the one-volume doctrinal reference field for the last two generations has been McConkie’s Mormon Doctrine (“MD”). I don’t know whether the title LDS Beliefs was intended to mirror the earlier title, but Deseret Book no doubt hopes the new volume will sell as many copies as the prior one. I certainly think we will all be well served if the general membership of the Church starts going to LDS Beliefs rather than MD for a helpful summary of Mormon doctrine on particular topics. Why?

There’s a big difference between today and the two decades following 1958, when MD was first published, then revised, and when it had its greatest influence. The difference is not so much in the substance of LDS doctrine as in its tone. LDS leaders of that era, including Elder McConkie, took positions on topics (and seemingly committed the Church to positions on topics) from which the 21st-century Church has gently backed away. For example, MD’s Evolution entry covered several pages, endorsing a 6000-year-old Earth and the view that there was no death before the Fall of Adam, then declaring: “There is no harmony between the truths of revealed religion and the theories of organic evolution.” [In fairness, the article also stated, “Obviously there never will be a conflict between truths revealed in the realm of religion and those discovered by scientific research.”]

In contrast, there is no Evolution entry in LDS Beliefs. There is no entry on Science. This seems in line with the most recent counsel given by LDS leaders on the faith/science issue: “Leave geology, biology, archaeology, and anthropology, no one of which has to do with the salvation of the souls of mankind, to scientific research, while we magnify our calling in the realm of the Church.” [From the Evolution entry in the Encyclopedia of Mormonism; see extended comments on that entry in the comments to this earlier post.]

Millet has been arguing for this narrower approach to LDS doctrine for years now, apparently as a result of his extensive interfaith work in a variety of settings. About the hundredth time you have to deal with a sincere question that starts out, “Why do Mormons believe …,” followed by an excerpt from the Journal of Discourses or an accurately quoted but speculative statement from a single LDS leader, you are ready to reassess the regularly repeated folk doctrine that every word that proceedeth forth from the mouth of an LDS leader is LDS doctrine. Millet’s narrower formulation, which I have seen expounded at length in several of his books but which is expressed concisely in the LDS Beliefs entry “Doctrine,” is as follows:


Is it found within the four standard works or within official declarations or proclamations? Is it taught or discussed in general conference or other official gatherings by general Church leaders today? Is it found in the general handbooks or approved curriculum of the Church today? If it meets at least one of these criteria, we can feel secure in teaching it.

That sounds a lot like what a properly directed Correlation function should use as a guide to what should or shouldn’t be stated in official Church publications. If Correlation actually uses this sort of approach, then good for Correlation. If Correlation still defers to the traditional CES preference for statements (from whatever source) by Elder McConkie or Joseph Fielding Smith, then please, please get rid of current Correlation management [LDS bureaucrats, not senior leadership] and put Millet et al in their place.

True to the Doctrine

The booklet True to the Faith, an official publication of the Church, was originally directed to the youth. As I recall, when the booklet was first published a copy was distributed to each of the youth age 12 through 18 in their Sunday classes. However, the utility of an officially published doctrinal summary was quickly apparent, and the booklet became a primary resource for LDS doctrinal reference by adults as well as youth and by non-LDS as well as members of the Church.

LDS Beliefs offers more and considerably longer entries, of course, with authorship of each entry disclosed at the end of each article. It’s nice when actual authors are identified — this reinforces the claim that it is an individual speaking, not the Church, and provides a person to whom a reader may direct questions if they so desire. The standard disclaimer is given at the end of the Introduction to LDS Beliefs: “While we have sought earnestly to be in harmony with scripture and with the teachings of our leaders, this work is not an official publication of either The Church of Jesus Christ of Latter-day Saints or Brigham Young University.”

When, as with Mormon Doctrine, the identified person speaking is a General Authority, the question of whether they are speaking as an individual or on behalf of the Church can be unclear. I think this confusion has generated much of the controversy over the status of the book Mormon Doctrine. The better practice, I think, is for general doctrinal summaries to have disclosed authors who are not General Authorities (as with LDS Beliefs) and for official Church publications (like True to the Faith) to have no authors listed. Yes, it sure would be nice if some sort of disclosure were provided of the process by which manuals and other official publications of the Church are prepared, but at the end of the day it is good to have a clear distinction between opinions or statements of individuals (however well informed) and statements of the Church as an entity (which should stand independent of who authored the statement).

Five Volumes is Four Too Many

The last comparison is to the five-volume work The Encyclopedia of Mormonism (“EOM”), originally published by Macmillan in 1991. This was a monumental publication that, unfortunately, did not get much attention in the Church as a whole. It’s the sort of publication that gets purchased by libraries but not by individuals (I don’t know any individual who actually purchased the five-volume set). And it is not just the price: the Joseph Smith Papers Project volumes aren’t cheap, but many individuals are purchasing copies. Single volume selections from EOM were published by FARMS around 2000 (I own To All the World, the single volume selection of EOM entries relating to the Book of Mormon) and the entire publication is now available and very accessible (for free) online. Still, my impression is that EOM did not live up to its potential.

Like EOM, LDS Beliefs lists authors and sources after each entry. It is fair to think of LDS Beliefs as a scaled-down version of EOM with (following the Millet doctrinal approach) a narrower view of doctrinal topics. Hopefully LDS Beliefs will succeed in a way that EOM did not. It is perhaps unfair to compare EOM, which was intended as a scholarly reference work, directly with LDS Beliefs, which is intended to be a popular reference work. A rewarding exercise for anyone consulting LDS Beliefs is to go look up the corresponding entry in EOM. But the bottom line is that there is a distinct need for a reliable and understandable one-volume doctrinal summary for the average Latter-day Saint. EOM did not fill that need; LDS Beliefs does.

J. Stapley posted a review of LDS Beliefs about a month ago at BCC which provides more details as to the particulars of the book itself. I’ll just add a few quick observations that I didn’t cover above. First, I was surprised that Lectures on Faith was given such lengthy discussion (a six-page entry) and was so frequently cited as a source. That’s a bit unusual. Second, despite the contrast I drew above between LDS Beliefs and MD, the book cites Elder McConkie and Joseph Fielding Smith rather frequently. Lesson for the senior LDS leader: write lots of general doctrinal commentaries and you will be cited by three or four generations of LDS scholars. I don’t recall seeing any citations to David O. McKay or Hugh B. Brown.

I am hoping to see some comments on this thread pop up on December 26 by those who unwrap this book Christmas morning and look through it. (I hope you have something better to do on the afternoon of the 25th than to post comments at T&S!)

← Theotokos: Flight
An Argument for Huntsman →

12 comments for “Under the tree: LDS Beliefs”