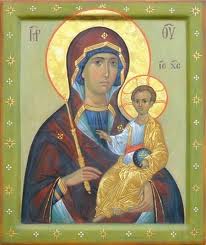 Between the Washington Beltway and the Delaware coast lay 150 miles of waiting. Waiting, and watching, and sweating with boredom as my grandmother’s Oldsmobile slowly cruised Route 50. We took this road every summer, me and my brother and our Yia Yia Christine, leaving behind the Maryland suburbs for the Lynard vacation spot on Rehoboth Beach.

My little-girl legs stuck to the vinyl seat as I craned my neck to look out the side window. Nothing but cornfields and asphalt and heat. Just as I began to doubt the sea ever existed, my nose caught salt in the air, and I knew we were close. But even so, our arrival always shocked me. After interminable minutes of winding through the clogged coastline town, the road took one last turn and came to a sudden end. Peering through the windshield from the back seat, all I saw was watery sky, and my head swam as if we were teetering on the edge of the world.

The grey-green Atlantic scared and thrilled me. Each summer my stomach tingled as my toes finally touched the foaming surf. Overwhelmed by the water’s impossible vastness, I studied the horizon and imagined a girl just like me standing on the opposite shore, thousands of miles ahead. Facing west, she too strained for a glimpse of what lay beyond. Maybe if I looked hard enough, my eyes would absorb the distance between us. But all I could see was the hazy grey line that separated sea from sky, curving like the edge of a plate.

On the beach Yia Yia wore an old-lady bathing suit, shades of light blue, with a little skirt that showed the darker blue veins branching up her legs. With her olive skin and short waist and fleshy curves, she stood with me on the smooth sand of the shoreline and faced the towering swells racing toward us, tumbling over themselves and reaching slickly for our feet. Like she did every year, she warned me against the ocean’s undertow, strong enough to suck children out to sea. I felt its pull as the washed-up waves receded, tugging my ankles hungrily and leaving my toes buried in sand.

When I was old enough I braved the breaking waves to body surf with my brother. Again and again we rode the rolling curves to shore, trying to outsmart the power which inevitably caught us, lifting and curling our child-bodies and grinding us into the sandy ground. Wipeouts, we called them. Left panting in the shallow surf, we’d stagger back to the solid safety of the beach, surprised to be alive. Later we washed the brine and grit from our skins with sweet fresh water, put on dry clothes, and sat at the table on the screened-in porch, waiting to be fed by our Yia Yia, who emerged from the oven-hot kitchen with beads of sweat on her brow and circles of sweat on her back and platters of impossibly good food in her hands.

That’s how I remember her: warm and damp and slightly salty. So when I stand by her casket at the funeral parlor, I doubt that the cold bland hand under mine is really hers. Yia Yia Christine is not lying on this soft-cushioned bed in the shadow of its open lid. She is here in the bodies of her gathered family, sweating from the humidity of many pulsing hearts.

She is here the next morning as we crowd into the Greek Orthodox church near her former home in Bethesda, the church she attended every week, sometimes more than once. St. George’s. She took me here as a child, helping me lodge a glowing candle in the sand-filled boxes lining the narthex and urging me to venerate the icons at its doors. In the nave I sat at her side under the watchful eye of the Virgin Mary, who smiled slightly from her larger-than-life perch above the altar, holding the ageless Christ child on her lap.

I sat again at Yia Yia Christine’s side on my aunt’s soft cushioned couch, two months ago, the day after my other Yia Yia’s funeral. It was the last time I saw her alive. She spoke intermittently, in slowly circling currents that reached beyond without the bounds of linear time. In one sudden lucid moment she looked straight at me, called me by name, and said, “You look like your mother.” Lapsing back into curving thought, she told me how sorry I was that my mother had died, and worried aloud that her children hadn’t attended the funeral. My aunt clarified that it was my grandmother who’d recently passed away, and that the funeral had been well attended. But Yia Yia continued on, sometimes mistaking me for my mother, sometimes lamenting her death, as if grandmother and mother and daughter and granddaughter were one and the same.

My aunt emailed me updates once I returned to Utah. Soon after I left, Yia Yia lost her ability to speak. Soon after that, she was confined to the hospital bed set up in my aunt’s house. For a time she was able to communicate with her hands, indicating that she understood when others spoke to her. Then she could not move at all. For more than a week she lay in liminal space, still and silent.

When the time came, I packed my bag for another trip east. My daughter Christine, Yia Yia’s namesake, didn’t want me to go. “Can’t they just Skype the funeral?” she asked. Propriety aside, they likely could have. But I needed to be there in body as well as spirit. I needed to join my family members sitting in the pews, like children waiting to be fed. I needed to spill salty water and remember that life emerged from the depths of the sea, from the depths of woman, as the liturgy proclaims:

Rejoice, gracious lady, who for the salvation of all gave birth to God in the flesh, and through whom the human race found salvation.

The service comes to an end. Yia Yia’s body faces the sanctuary feet first, to symbolize the journey onward. Gathered around the casket, my family stands at edge of the world, where all roads lead. The father sprinkles Christine’s body with holy water and closes the casket lid. May her memory be eternal, he says, as if we might forget her. May her memory be eternal, he repeats, as if she might forget us.